Eraser: to err is human, to erase divine 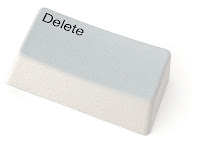 Where did he say this? A link? I'd love to develop this, too