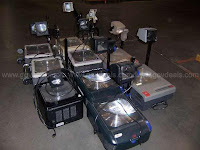 This lots of overhead projectors were being sold for 20 bucks in a government auction. Junk now but many will recall teachers, trainers and lecturers arrive with boxes or bags of acetate slides and then the boredom would begin. An odd trapezoid shape, would appear, be brought into focus, projected in dark rooms with a disembodied voice explaining all at the front of the class, often writing, writing and writing.
Overhead projectors do just that, project writing and slides by projecting light from a lamp up through the transparency then  through a mirror and lens that sits above the acetate on an arm forward through ninety degrees to a screen. Despite the powerful lamps needed for this form of projection, that had to be cooled by fans, the image was often quite dull and yellowish.
The first recorded use was by the US police but it gained popularity during the second world war in the US Army. Sales were stimulated into schools by the federal Aid to Education budget in 1957 and overhead projectors became ubiquitous in education and training until relatively recently, when they were replaced by computers and projectors.
Overhead projectors and learning
Easy to mock but as teaching technology it had the advantage of allowing the teacher, instructor or lecturer to look forward at the class, rather than turning round to a blackboard, PowerPoint users. It was designed for live writing as it sat at a comfortable height, unlike blackboards. And as the text was projected, one could write at normal size normally, as opposed to writing unnaturally, large text on a blackboard, holding up one’s arm for long periods.  You could use pre-printed acetates or write at will. This allowed one to take the acetate sheets out in whatever order required, as opposed to the tendency to stick to a fixed sequence in PowerPoint. Nevertheless, it is still the heir to the blackboard and a teaching technology that took teaching back, physically and pedagogically to the teacher talking and presenting to passive listeners.
Conclusion
As the dominant form of teaching technology for most of the second half of the 20th century, overhead projectors had several pedagogic advantages but in the end they were too bulky, had poor projection qualities and gave way to computers and projectors. In the end they are tools for projecting the thoughts of teachers and may be seen, like blackboards and the later PowerPoint, as seeing teaching as preaching.
(Thanks to Dick Carlston for pic and comments.)
at September 29, 2012

Donald, I remember attending a half-day seminar from 3M on designing overhead slides in the early seventies. Overhead projectors were very high-tech in their day.

Sometimes I'd throw a totally black slide onscreen and use it the way we later recorded memorable points on a flip chart.

BTW, I got back from London last night. Sorry to miss you on this trip. We got as close to Brighton as Gatwick but time ran out on us.