Techn-ology: from the stone axe to smart phones - another 50 blogs in 50 days 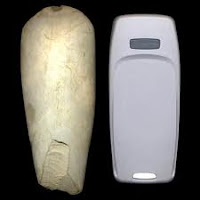 ‘Learning technology’ has been my passion for over 30 years. But even a brief attendance at a learning technology conference will show that the field is somewhat flimsy on theory. This lack of theory, on both ‘learning’ and ‘technology’, can produce fads, bandwagons and retreds, built not on evidence but on unverified, outdated or simply false theory.
Without an adequate theory of ‘learning’ much practice is misguided or blind. Similarly, without a theory of ‘technology’ much practice simply misfires. So, after 50 blogs in 50 days on ‘learning’ theorists, I’d like to turn to ‘technology’ or rather ‘techn-OLOGY’ with an emphasis on a deeper understanding of the history and science of the technology.
To this end I’m going to deliver another 50 blogs in 50 days on the use of technology in learning, from the stone axe to smart phones.
Note that my definition of ‘technology’ includes both hardware and software, as almost every piece of hardware has, as an integral part of its function or output, something  that can loosely be called software. In most discussions of technology there is a bias towards the physical, tangible, mechanical devices, but as James Gleick has shown in his excellent book ‘The Information’, many of our most important advances have been intangible technologies, such as writing, alphabet, audio, images, video, software and social media.
There are some major Kuhnian paradigms such as writing, printing press and internet but also some long lasting trends such as technology for writing, technology for reading, technology for classroom teaching, broadcast technology, personal computer technology and technology of communication.
Overall, technology has been around for as long as learning. There’s a tendency to see ‘technology’ as merely the stuff that’s been invented since you were born, when it’s been around since the birth of man.
As I’ll be pointing out, technology is not always an intrinsic good. It can be a pedagogic trap, even destructive force. This is a provisional list. My last marathon blog elicited some excellent suggestions from other experts, so please respond to this list with other suggestions. Thanks in anticipation. First post tomorrow, on the stone axe!
PS
After this I have a prospective list of 50 ‘learning technologists’. This will include technology theorists, such as McLuhan, Postman, Kelly, Kurzweil, Shirky, Lanierand and Carr. Also learning technologists and researchers such Twig, Reeves & Nass, Clark, Meyer,Gery, Gee, Prensky, Schank, Aldridge, Papert, Norman, Nielson, Cross and Hart. Then there’s the technology entrepreneurs such as Gates, Jobs,  Zuckerberg, Page & Brin, Hurley & Chen, Bezos and Zuckerberg. Also a miscellaneous lot such as Wales, Hart, Anderson (TED), Khan, Thrun, Wilson & Lee, Sperling, Wiley , Torvalds, Stallman, Lessig and Blake.
at September 14, 2012

I'm really looking forward to this series! Thanks for taking this on.

Hi Donald,
Just caught up with this series - another magnificent conception!

Will the role of libraries feature in the series?

Looking forward to it.

Yet another great idea for a series. Thanks for these great posts Donald.
Note you have Wikis twice at 30 and 47 (unless one is for Wikipedia?)
I would suggest classrooms or schools as an tool although obviously a complex one.
Amir