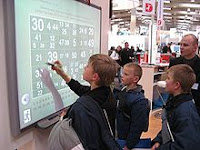 The interactive whiteboard is a rather awkward beast. Marketed as an interactive tool but in practice often used as a souped-up blackboard. It is an ‘interactive’ whiteboard but not for most students sitting in the classroom. It’s a computer but not under your control. Its primary use is by teachers, often nervous about their skills, watched by more confident learners.
The technology uses a bewildering array of infrared, resistive touch-sensitive, electromagnetic, ultrasound, even Wiimote hardware, designed  to improve teaching by taking computer content and interactivity into the classroom. Huge sums of money were spent on national programmes to introduce this expensive kit into schools, but on the basis of no clear evidence for their efficacy. Companies such as Promethean, Chaired by Lord Putnam (something, as a government adviser, he keeps quiet about ), made hundreds of millions by selling whiteboards - with high maintenance costs.
Benefits
Teachers can take and save notes and annotations, lessons can be recorded for future use by students who may have missed lessons through illness or absence. High quality curriculum content, designed for such boards, has been made available for teachers. Whole class assessment and feedback from students has been made possible through clickers that poll students or gather answers to questions, improving formative assessment. A whole ecosystem has been built around whiteboards in classrooms.
Do they work?
Studies that focus on student achievement are rarer than general qualitative studies on use and perceptions by teachers and learners. There is also a paucity of studies that are truly rigorous and comparative. One could conclude that this was a hugely expensive experiment, based on no prior evidence, with no clear subsequent consensus around its benefits in terms of attainment.
Larry Cuban, Professor Emeritus of Education at Stanford University claims that "There is hardly any research that will show clearly that any interactive whiteboards will improve academic achievement.”
The London Challenge research, by the Institute of Education, showed little significant impact on student performance in Mathematics and English and only a slight improvement Science at KS3. Even worse were the negative effects for Mathematics and Science in KS4. “Although the newness of the technology was initially welcomed by pupils any boost in motivation seems short-lived. Statistical analysis showed no impact on pupil performance in the first year in which departments were fully equipped.”
However, others, such as BECTA, show positive effects on student achievement. Their sponsored research covered  the impact of a large interactive whiteboard investment in 20 local authorities, 97 schools and 7272 learners. Improvements in attainment were measured in ‘months progress’ against standard measures of attainment and found to be largely positive over a two year period.
Marzano & Haystead (2009) in a study of 170 classrooms, also found positive results in the majority of students. However, Professor Steve Ross of Johns Hopkins University is highly critical of this oft quoted study, claims the research is flawed and that “you can't conclude anything" . Interestingly, the negative results in the same study are often ignored, where teachers polled students but did nothing with the findings or became besotted with the whizzy presentation of video and graphics.
Use by teachers
While some studies suggest positive results when used intensively, the actual use of interactive whiteboards by teachers is a huge factor in their effectiveness. Some studies, tracking actual whiteboard usage in schools, show surprisingly low use by teachers and even within these figures, they are often used to simply do what simpler, cheaper technology could have achieved. Some claim, that for many teachers it is no more than a powerful blackboard. It is entirely within the tradition of the teacher standing at the front and presenting content with many teachers using them for tasks that could just as easily have been delivered through plain projectors. Many use them rarely or not at all.
The Glover & Miller research showed a remarkable level of conservatism is their use as teachers clung onto existing practice and teaching methods. As a mere adjunct technology its potential remained largely unrealised. They found that only 10% of teachers used the technology in a transformative sense.
They can be an uneasy broker between savvy students and nervous teachers, who can feel exposed when their lack of skill becomes highly visible to the entire class. Here, the technology can undermine the authority of the teacher, even invite ridicule. So, without adequate training, it can be a destructive force for both teachers and learners.
Whiteboards can also slow the pace of teaching and learning of the teacher becomes too focused on the technology or relatively trivial forms of interaction. Even worse is the ‘taking turns’ interactivity that slows the entire learning process down. The early research suggested that it takes around two years of use before teachers became comfortable enough to use the technology with real confidence, leading to benefits for learners.
Conclusion
White has become the new black in classrooms for some time, as whiteboards replaced blackboards Whiteboards have clear benefits in teaching, albeit diminished by the lack of technology skills among teachers, but it is not clear that these carry over into learning. Despite the huge cost the jury is still out on the return on this investment.
Bibliography

Interesting stuff. As a just retired Head of French who made quite frequent use of the interactive board, sometimes genuinely interactively, I wonder whether the aim of them was necessarily to raise standards of attainment. At various stages of my career I have seen the tape recorder, television, language lab, flashcard, flannel board, CD player, mini whiteboard and so on. They have all made lessons more varied and stimulating for pupils and teachers and no doubt some of these advances have raised motivation and achievement (though, as you explain, it is hard to prove), but maybe just as importantly, they have simply made learning more fun and engaged a wider range of pupils who could not cope with chalk and talk.

Fair point Steve. Still raises the question about whether the investment was worth it.
I suppose I agree with this language teacher's position http://teacherleaders.typepad.com/the_tempered_radical/2010/02/what-id-buy-instead-of-an-interactive-whiteboard.html

So they're not well used in many cases, implementation plans have been poor, teachers/trainers have been insufficiently supported and more staff development is needed - if not a pedagogical revolution to discourage didactic bad practice. But surely they're still a useful tool and a good idea?

I can't see SMARTboards becoming the same sort of white elephants as, say, laser disk players. It seems there's insufficent evaluation going on, and plenty of scope for improvement. But are we going to chuck the baby out with the bathwater, just because they've been oversold without due consideration of their use and impact?

Nice post, Donald. I used to run the global content strategy for an IWB manufacturer and I can tell you that I got this question about the ability of the IWB hardware to change learning outcomes. From my perspective it's not the correct question to be asking. The IWB hardware is just a tool, and as Steve Smith points out in his comment, not altogether different from other tools, such as the tape recorder, television, etc. Putting poor instructional materials in the hands of an ineffectual teacher who just happens to have an IWB will be no more or less effective than if the IWB were absent. In my opinion, the focus should be on building truly effective instruction, with individualized, adaptive lessons. The IWB or other hardware is merely the delivery system.
Karen Mahon
www.karenmahon.com

Ken & Karen. Points well made. However, given the HUGE investment it is only right that we look at increased attainment. More worrying are the reported negative effects, such as slowing down teaching with lines of students taking turns. Under use as projectors and so on.

Donald, I agree that value for money should be examined. My point is only that if you do NOT find increased achievement in a classroom that has received an IWB there are too many possible reasons for that lack of achievement to place blame on the hardware.

That said, my position is that when selecting hardware for classrooms the most extensible and flexible options are usually best. Hence my enthusiasm for tablets.

As with most classroom situations, it probably depends on the teacher and how they choose to use the interactive portions of the whiteboard. I would think that kids would learn quite a bit from being able to interact and would expect it nowadays with so many computers, tablets, etc.

As with any investment the cost needs to be justified - paying for a smartboard and using it as a plain whiteboard is a waste of time and money.

You have interesting points. However, since you’ve mentioned that it would take years for teachers to get used to the idea of interactive whiteboards, I think we could reserve our judgment for a couple of years. Hopefully by that time, more schools have used these boards and more experiments have been conducted.