10 reasons why OER fails. CAVE dwellers (Colleagues Against Virtually Everything) 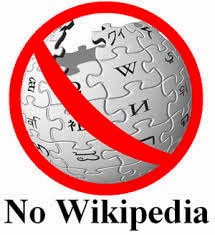 The promise was of a future where Open Educational Resources would sweep the globe and those pesky publishers would be washed away by a tsunami of high quality, free stuff. It happened to a degree with Wikipedia, Khan, YouTube, MOOCs and Duolingo but almost in spite of the institutional OER movement. In fact, there seems to have been a bifurcation in OER between the flood of publically funded projects, that tended to atrophy even die, and a successful crop of global successes. So why has OER been so successful outside, rather than inside, of education and academia?
I’d argue that this was due to several things; scepticism, institutional attitudes and a lack of awareness around marketing and sustainability in the educational community. The successes have been those that weren't held back by these barriers.
1. War on Wikipedia
Wikipedia is still being treated as a pariah resource in education. I still encounter fierce resistance and an almost visceral dislike of Wikipedia by professional educators, in contrast to almost universal acclaim by learners and users. Rather than accept the fact that it is the most used and valuable knowledge base we have ever known, and that almost every learner on the planet finds it useful, educational professionals engage in a low level war against its use, usually on the back of uninformed, anecdotal statements on accuracy. This has been counterproductive but absolutely symptomatic of the problems around OER. If it does not originate within an institution, it cannot be useful.
2. War on MOOCs
Rather than celebrate the existence of MOOCs, many educatiors immediately engaged in a guerrilla war, against either the quality of the content or the ‘privatisation’ of education. This is a shame as it was knee-jerk envy, rather than analysis. The argument about drop-out is a clear category error as completion is not the point. If the truth be told, MOOCs have had a profound effect on attitudes towards online learning. The major players have grown Coursera, Udacity and EdX. The relentless attacks have stymied their accreditation but the good news is people keep on making them and that learners keep on taking them, especially in vocational subjects.
3. War on Khan
You’d think it was Ghengis, not Salman, Khan, who gave us this fantastic set of resources in maths and other subjects. Breaking the back of the ‘talking head’ lecture, he stuck to simple narration and short pieces of exposition, putting many maths teachers and lecturers to shame. The backlash was predictable but the learner numbers, which are astonishingly high, just keep on growing. Why would we NOT want an organisation that delivers sustainable "education for anyone, anywhere", in a huge number of languages, for free?
4. Educational cynicism
Rather than promote the use of OER, teachers and academics often (not all of course) take a distant, sniping, hostile, even histrionic stance against their use. I’ve encountered far too many CAVE dwellers (colleagues against virtually everything), yet the use of OER would widen (not narrow) the experience and pedagogic sophistication of most teachers. It is OER that allows more blended learning and flipped learning. In practice, it is rather sad that the success of OER has been in learners, in their hundreds of millions, by-passing teachers and using these resources without their knowledge, sometimes defying their prohibition.
5. Free at point of access
More focus on saving costs would not be ‘managerialism’ but an honest attempt to lower the cost of education, which we know is spiralling out of control. Education (not information) wants to be free. That’s a good mantra, as it undermines the existing, incredibly expensive model based on scarcity. Sure there’s been a rise in open policies, open journals and huge amounts of debate around OER but more focus on making education accessible through lower costs is what’s needed and that is what Wikipedia, Khan, MOOCs, Duolingo and others have provided.
6. It's corporate, it's bad
YouTube is arguable the most used learning resource on the planet, from fixing something in your home to high end maths and AI, videos are accessed in their hundreds of millions by those in and outside of institutional education. New video genres, such as the 2 minute academic papers or pedagogic advantages, such as teachers who are often better than those at your own institution or the ability to stop, rewind, 24/7 availability have made YouTube a real learning platform.
7. Obsession with reusability
OER, in its early days, got bogged down in an obsession with reusable learning objects (this led to the largely hopeless SCORM standards) and a far too ‘teacher-oriented’ view of reusability. In some circles the obsession with the reuse of content by 'teachers', rather than straight use by learners, has led to an inward-looking attitude, and even poorer quality resources. Teaching is a means to an end and the most valuable OER resources are those used directly by learners. The sad fact is that reuse by educators forms a tiny, tiny part of overall use. In Wikipedia and the Politics of Openness, Nathaniel Tkacz rightly shows that so-called ‘open’ resources often contain overly hierarchical structures. This is certainly true with the reusability argument, where old ideas about quality and reusability are really epistemological arguments about control and certainty.

8. Poor marketing
OER initiatives too often lack the marketing skills to get their resources recognised and used. Poor, often confusing branding, no real marketing budget, expertise or marketing plan, results in repositories of unknown and unloved resources.
9. Social media scepticism
Another symptom of this marketing malaise, in educational circles around OER, is the failure to see social media, through links to openly licenced resources, as a primary means of dissemination. Scepticism around social media is quite simply a failure to understand how dissemination (read marketing) actually works. One could argue further that social media is an OER resource in itself.
10. Unsustainable
The failure to see ‘sustainability’ in terms of business model and funding has also been a real Achille’s Heel. Far too many projects were doomed to succeed, in the sense of being funded but not on any financially sound model beyond pilots and repositories, and therefore remained insular. The successful examples, such as Wikipedia, Khan, YouTube, DuoLingo and MOOCs transcended the traditional ‘keep it in the University’ model, to provide hundreds of millions with valuable resources. They use a variety of models but sustainable models they remain.
Conclusion
Empirically, we’ve seen in Wikipedia, YouTube, Khan, Duolingo and MOOCs, truly wonderful examples of how pragmatic and sustainable openness can be achieved. Yet these are the open resources that get the most mud slung at them. Rather than sniping, educationalists should embrace the decentralisation, democritisation and disintermediation of learning through such resources. The examples I’ve quoted, that work, have grown because they started and exist outside of educational institutions. This is a shame, as we could have reshaped higher education to become much more open and accessible without this scepticism. It would seem that the future of OER needs to be in sustainable models beyond these institutions.

We did not boycott Andrew Carnegie's libraries we got stuck in http://en.wikipedia.org/wiki/Carnegie_library

There are a lot of learners accessing all of these resources in lots of different ways.

There is a lot more that the University , College and School public and paid for systems could do for the greater public good locally and globally

Could we possibly add "Quality Assurance". I was briefly a reviewer for Merlot and the process was very difficult. This type of QA is based on the idea that experts know best what constitutes a quality learning object. It is probably more efficient to release OERs into the wild as soon as possible and let users, both teachers and students, review them (and use them). This is essentially how Khan videos rose to the top on Youtube.

Good point Brian. In that sense the Darwinian process that is the web is a pretty good filter. The numbers spaek for themselves, which is why I allude to Wikipedia, Kham, YouTube, Duolingo and MOOCs.

You read my mind. One of the reasons for the great success of the Internet is the lack of planning - lots of experiments with the best winning out - not by convincing experts but by gathering users. Darwinian as opposed to intelligent design.

I completely agree with you and Brian about "quality" In the context of OER it's a weasel word used avoid engaging. There is a good post on this from David Wiley http://opencontent.org/blog/archives/3830

Thanks very much for this thought provoking post - I've offered my extended reaction (through the lens of US K-12, which is admittedly narrow and peculiar) at: http://www.edtechstrategies.com/blog/the-fans-fanboys-and-fanatics-of-oer/

Part of the problem with OERs is knowing what they are. It is a rather vague term ... like educational technology. YouTube creates an image and expectation of what you are going to get whereas OER does not.

A valuable analysis of the problems we face in trying to encourage the 'sharing' approach — thank you.

May I add another important OER repository to your list, often belittled by those obsessed with point 7 (or confusing OER with Open Source): iTunes U. Its download-and-use-offline facility is particularly useful.

(In the interests of full disclosure: I have a vested interest, as I run the University of South Wales iTunes U site)

PS — I LOVE your CAVE acronym — I will be 'sharing' that extensively ;-) (with attribution, of course)