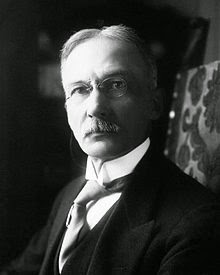 You’ve probably never heard of James Mark Baldwin. Yet, he may be the greatest learning theorist that ever lived. A 19th century psychologist, he introduced what is called the ‘Baldwin Effect’ into evolutionary theory. The idea is that learned behavior, and not just environment and genes, influences the direction and rate of the evolution of psychological and physical traits. The Baldwin effect places ‘learning’ on a larger theoretical canvas, lying at the heart of evolutionary theory. It is no longer just a cognitive ability, albeit a complex one with many different systems of memory involved, but a feature that defines the very success of our species. This is a profound and radical idea.
Note that this is not Lamarckism, as it does not claim that acquired characteristics are passed on genetically, only that the offspring of a adaptive trait (physical or psychological) may be genetically better at learning. This creates the opportunity, as it creates the conditions and successful population survival, for standard selection to take place.
Just as Darwin and Wallace struck upon the same idea at the same time, Baldwin had two Wallaces in Henry Fairfield Osborne and Conwy Lloyd Morgan. All three published the same ideas in 1895-96.
Growth of Baldwin effect
It has some impressive supporters include Aldous Huxley, Hinton, Nowlan, Dennett and Deacon. Evolutionary psychology in paeticular has had a profound influence on the resurrection of the idea. Daniel Dennett is one theorist who posits the Baldwin idea that learned behavior, especially sustainable innovative behaviours, if it is captured in substantial genetic frequency, can act as what he calls a ‘sky crane’ in evolution. Hinton and Nolan revived the idea  in How Learning Can Guide Evolution (1987) and Richard Richards who published Darwin and the Emergence of Evolutionary Theories of Mind and Behaviour, in the same year. They generated enough interest for John Maynard Keynes. to support them in a article published in Nature in the same year. But it is Daniel Dennett who has done most to popularize the idea in Consciousness Explained (1991) and Darwin’s Dangerous Idea (1995). Weber and Depew have since published an excellent explanatory and supportive book Evolution and Learning: The Baldwin Effect Reconsidered (2007).
Deacon proposed that the Baldwin effect accounts for the rapid evolution of the mind and language. As Wittgenstein showed, a private language makes no sense as meaning is use. As soon as a small number start and continue to develop language skills it confers significant adaptive advantage and confers a real runaway advantage to the users. This ability to learn new skills may be the key to our species having moved beyond fixed, genetic determinism.
More than just language, adaption to new environments, responding to climatic and food pressures and other changes that require quicker adaption through selected learning, may have played a role in the rapid success of Homo Sapiens. Dennett proposes the actual creation of selective pressure on others by sustained learned behaviour. This is where it gets interesting for technology.
Technology
Significant advantages could have been through the relatively rapid learned ability to create technology, namely the production of tools. Technology scales the ability of its producers, owners and users to avoid predation, become better predators through hunting and fishing, protect its owners against climate (needles, cloth, clothes), use fire and preserve food. Technology is the real success, especially technology that allowed us to create social groups in which learning, in the sense of teaching and learning, could thrive.
Homo Technus
My favoured flavour of the Baldwin effect, is the runaway success of learning to make things, namely the production of tools and technology. This could be the cardinal, causal factor that the Baldwin effect bestowed on our species. Note that our species Homo Sapiens, was not the only species to thrive on the success of tools and technology, all other humanoid species did so, only not with the same levels of success. The history of tool making shadows the history of our species and gives us a window into the development of consciousness. The trail of stone tools is often as significant as the fossil bone evidence. Our advantage over our nearest rivals, the Neanderthals, seems to have been based on superior minds, tools and technology.
One could go further and claim that learning, especially the development of cognitive systems such as episodic memory, gave the production and use of technology a privileged status. In its current phase, technology itself, through various network effects and machine learning has taken this to new levels. It may even transcend our very notion of what we currently see as intrinsically human.
Technology as tools, machines and automation may be the most important factor in our 'success' as a species. It has taken us to every corner of the globe, the depths of the seas, to the moon and beyond.
Conclusion


In an interesting twist of fate Hinton and Nowlan claim to have demonstrated, through computer technology (simulations) that learning could shape evolution. The Baldwin effect, may, through its own efficacy have created the technological conditions for its own proof. The brain, through consciousness, may have created a fast developing structure that in turn accelerates learning and thus evolution.
Baldwin, J. M. (1973). Social and ethical interpretations in mental development. New York: Arno Press.
Dennett, D. C. (1995). Darwin's dangerous idea: Evolution and the meanings of life. New York: Simon and Schuster.
Dennett, D. C. (1991). Consciousness explained. Boston: Little, Brown and Co.
Weber, B. H., and Depew, D. J. (2003). Evolution and learning: The Baldwin effect reconsidered. Cambridge, Mass: MIT Press.
at May 01, 2015