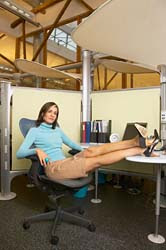 Facebook – a time waster?
Youngsters have some neat TXT acronyms on messenger for intrusive parental behaviour - POS and POMB (Parents Over Shoulder & Parents On My Back). As HR departments fall over themselves to ban Facebook, it begs the question as to whether they should ban it or build on it in organisations. It’s a little sad that supposedly, people-friendly HR departments are now seen as the social-police. But they may have a point which is the possible drain on productivity.

7 types of added value
What organisations want to know is the added-value to their organisation of social networking. First we have to distinguish between open and closed social networking. A closed network, like a Facebook corporate network only allows members to socialise with other employees. Given this distinction, what are the benefits:

spike
There’s a spike on the internet as social networkers, news hounds, gamers and ‘video snackers’ chillout from their daily grind. So the productivity slump is, I suspect, a mirage.

PS
Giving a talk on this and other social networking issues - legal problems etc at Learning Technologies on Thursday 30 Jan at 11.30.
at January 13, 2008

Donald you don't specify where you are giving your chat on Social Networking.

I agree with many of your points, my worry would in a world open to Freedom of Information Act and increasing litigation that as the line between work and social activities becomes softer, it's the employee that will get themselves in hot water.

Good training and peer moderation is critical if your vision is to work. There is a real case for a course called managing on-line;


Next generation management training should make this course compulsory !

Human Resources 'we mine resources until there is nothing left' are only friendly while they are working out how to stab you in the back.

They lost there way when they changed their name from 'Payroll'

I do personally think that Facebook is a waste of time. It hasn't done much for me apart from reconnect me with old friends (who I don't keep really keep in touch with anways).

The second most useful thing of Facebook are groups. Yet I don't use them because they lack the basics of RSS. I don't have the time to go and check for any new news.

I think there are alot better options out there than Facebook. I t doesn't mean I think banning is right though.(This just gives me an opportunity to have a rant!)

Of course there are people who feel the need to ban things, such as this Brighton University Professor.

Strikes me that any organisation that has productivity issues with Facebook et al needs to look at its recuitment and performance management rather than blocking sites. It seems to be on the lowest run on the scale of trust. And without trust what sort of company culture are you really projecting.

But, then again there is no end to which IT departments seem to be hell bent on denying the power of networking (ironically). Ours even blocks the Plan B Blog...