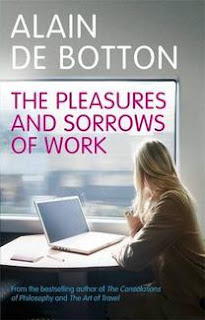 Trite slogans, such as ‘We like people who demonstrate integrity, energy and enthusiasm’ adorn walls, yet within they get on with the murky business of tax dodging and signing off the false accounts of banks. They’re a little hostile and cold towards him as they know that his curiosity is likely to result in mockery, and so it does. Auditors have made their peace with ‘oblivion’. They know they have made a choice to make money at the expense of fulfilment. The training is in the ‘laboured tone of away day seminars’ and the CEO is a cipher, spouting nothing but clichés.

Work, for Botton, is an unexamined mystery. He’s puzzled at its absence in literature, film and TV, apart from ‘cops and docs’ shows. So he follows a tuna from the Maldives to Bristol and wonders at the logistic complexity of the journey. In a biscuit factory he finds that there are five categories of biscuits; everyday, treats, seasonal, savoury and crackers. For the Design Director biscuits are a branch of psychology, not cooking. He encountered no jokes at any biscuits expense! Unfortunately he drifts a bit in the chapters on painting and entrepreneurship but the essay on electricity pylons is beautiful – honestly!

Therapy culture has also invaded the workplace and he gently mocks the psychotherapist whose advice is largely to repeat ‘I am and here only for you’ and getting them to repeat ‘I am the author of my own story’. The poor, deluded chap is a follower of that charlatan Maslow, travelling the UK staying in joyless Ibis hotels doling out meaningless personality tests.

It’s only in the last 200 years that work has been seen as a worthwhile pursuit. Before this it was slavery, serfdom and servitude. It is only recently that work needed to become meaningful (for many it remains meaningless). This is difficult as many are very remote from the final product or outcome. Above all he sees work as a distraction. People seem to need to be distracted from having to think and do things for themselves, so they delegate this responsibility to others, employers. This gets interesting. In work, time masters you, you are not the master of time. You give up responsibility to become part of an organisation.

There’s a big difference between working class and middle class views of work. The working class, by and large, work to put food on the table and have a good time at the weekend, whereas the middle class see work as a means to personal fulfilment. Nothing new here, but he cleverly takes it one step further. Unemployment for the middle classes is psychologically catastrophic, and in the current recession we’ll see lots of this.

What’s relevant here is the false assumption that everyone wants to learn and be trained. Millions see both work and learning as a necessary chore. Their heart will not be in taking the course. Work is instrumental, not fundamental. It is therefore utopian to see training as personal development, as many don’t live to work, they work to live.

HR puzzles him as it is seen as a joke department, so he shadows them in their attempts to get large numbers of people to work together in a confined space without killing each other. He has a go at their cringe-worthy, David Brent-like language and techniques, but ends up grudgingly admiring them.

A telling comment is his view that most of the jobs he observed were undemanding. They could be done by a smart 12 year old, as the essential skill is common sense. Education is relatively futile, as most of what we learn we never use. Education and qualifications are all about keeping people out of the middle class professions, they are not about essential skills. All professions are truly a conspiracy against the laity.

Alain de Botton’s is way beyond the journalistic jottings of Gladwell. I thoroughly enjoyed his book Status Anxiety where he sees happiness as equalling expectation over achievement. Apply this to work and for many work leads to drudgery and disappointment, as we realise that that we have to settle for what we’ve got, based on some odd decisions and accidents in our early lives. Work is almost tragic in its consequences.

Britain has an anti-intellectual streak, and unlike the French, doesn’t like deep analysis of everyday concepts, but Botton can certainly craft a sentence to strike a melodious chord. Of course, Botton is actually Swiss, and not short of a bob or two, but maybe this is why he can look upon the topic with real objectivity and depth. Works for me!

Does he explore the idea that often it is the only things at work that aren't anything to do with work that make work bearable?

Industrial society and industrial education are an outlier. Evolution will have it's way with them...

Exactly Andy. I saw Botton speak lst week and he stressed this need to find meaning through relatonships and social activity at work. Meetings take ages to start because people want to talk and show that they're 'human' and not just cogs in the machine. What's interesting is the way HR has to play the role of protecting the organisation from such human behaviour. It's not 'human' it's merely 'resources'.

With so many things and beliefs crumbling, there is no surety now that what we do in the name is actually work or anti-work. What all the mighty experts did-has erupted on the world as recession. The self importance that is attached to all these establishments that make decisions on economy, now don't they look like fools? If all that, which was done by these earnestly hard-working people was work, then what is sloth?
Am no authority to stress but what I observe is: we are a civilization that is in infant stage of development. The work if it is really work should have be in sync with the nature. What is work in nature? It is survival while maintaining the sustainability. We have mastered the survival part but completely erased sustainability. In this latest fiasco, had the top dogs thought of sustainability while banks doled out credits, there would have been less consumerism (yes, less bliss with plastic and exotic foods!), but there would have been a stable growth. Apply this to any model where human work is involved and you can see the greed out shining every thing else. Knowing that resources are limited, those who are coming to realize the mirage of this kid of work, even they can't go against the system. So we keep working towards a greater disaster like the recession, led by the blind head sheep.
I think I got too skeptical, nice picture Donald!And a wonderful post, never thought about work in this light earlier.

yes - let's pitch all of evolution against some policy and see which wins.

There are quite a few Futuremedia babies about - in fact I will shortly be going to get one from school, and she is far more entertaining than Statistical Process Control. If I was Peter Copeland I would be rather proud of that.

Is it a coincidence that when there was a regime change and such things were 'forbidden' LOL that the company crumbled but the babies still happened?

PS I should add that this is why facebook and twitter and things like that are great fun for work too - because they let people see the human side of you (fancy that we both like Marillion etc) - but you have to be careful because the inhuman eyes are watching.

This will all change quite quickly I think because the potential workforce of people who have talent and have not made a tit of themselves on facebook or similar will rapidly approach zero.

If someone proudly told you at a interview for a sales job, Donald, that they work to live, would you reject them immediately for not being committed enough or give them the benefit of the doubt and think that they had said it the wrong way round in the pressure of the moment!!!