Last year I had a few drinks and dinner with Steven Johnson, and he was delighted to hear that Flynn, whose data he had used in Everything Bad is Good for You had come round to his hypothesis, that new media was making people smarter. Johnson used f Flynn’s IQ data from the US military that showed a 0.31-0.39 points per annum rise over 46 years. New media doesn’t dumb down, but smartens up, he concluded. 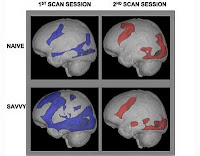 A new study has looked specifically at the impact of web use in older subjects. A fMRI-based study from UCLA has just been presented by Teena Moody in Chicago at the Society for Neuroscience, which took scans from 24 normal 55-78 year olds. It showed significant increases in brain activity patterns and increased function after just seven one hour sessions on the web over seven days. The control was the group who did no web activity.

“The first scan of participants with little Internet experience showed brain activity in the regions controlling language, reading, memory and visual abilities. The second brain scan of these participants, conducted after the home practice searches, demonstrated activation of these same regions, but there was also activity in the middle frontal gyrus and inferior frontal gyrus – areas of the brain known to be important in working memory and decision-making.

“The results suggest that searching online may be a simple form of brain exercise that might be employed to enhance cognition in older adults.” says Moody.

What’s fascinating about brain scanning research, is the possibility of identifying optimal learning techniques. For example, what type of internet activity leads to highest levels of desirable cognitive activity and improvement?

Interesting finding! But does this study compare older adults who refer to offline reading materials (books, magazines, newspapers, etc.) with older adults who surf the Web? Does the study establish that internet surfing improves IQ over offline information dissemination?

This is very encouraging! A question though - is the increased brain activity due to the fact that people are learning better because new technology helps them find information quickly or is it because the medium itself is new and involves learning of how to navigate and search for information.

I guess my question is could we get the same results if we used existing media but presented information in a different and unexpected way.