Only 60% attend lectures & plummets across semester & week – and that’s at Harvard!

Whenever I hear the word ‘pedagogy’ in HE, I reach for my gun. Again, institutions that have the ‘one hour lecture’ as their core ‘pedagogy’ need to have their heads examined, or at least read some basic psychology on attention, storage, practice and recall. In short, lectures go against everything we know about the psychology of learning. Of course, if you do question it, you need to duck as the stones from glass houses come at you like hailstorms. I know – I’ve been there. That’s why this Harvard study is a killer, but first some reflections.
University rankings are a lie
University ranking tables are perhaps the most mendacious form of marketing known to man. They are, quite simply, a lie. Why? They say nothing about ‘teaching’ the reason for most of this marketing effort is to attract students and funding (monetising). The reason they say nothing is that they don’t measure anything. It’s all proxies. The Times rankings are a case in point. They claim that their ranking scores include teaching. In fact, only 30% is based on teaching but they use NO direct metrics. The proxies include student/staff ratios (which is skewed by how much research is done) and, even more absurdly, the ratio of PhDs to BAs. It is therefore a self-fulfilling table, where the elite Universities are bound to rise to the top. There is no direct measurement of face to face time or student satisfaction. They don’t even measure how many students turn up to lectures, their primary form of delivery. Imagine a restaurant that doesn’t record the number of customers that eat its food or the film that doesn’t measure its box office numbers. This puts paid to the idea that HE is anywhere near the Big data world. It is closer to the no data world.
When you then ask why they don’t measure this stuff – the reason is clear – they’re scared. Studies on lecture attendance are rarer than dragon’s teeth. Even when you do find one, it is usually flawed by being self-reported data on both attendance and reasons for non-attendance. In addition, they are usually single courses and the selection of those courses does not eliminate bias in the selection process. In short – they’re fatally flawed.
We lecture because we always did
Schank, a major academic and learning expert, has been looking at this issue for over 30 years thinks he has the answer, and I agree. Fundamentally, we lecture “Because we always did. No one wants to change this really. We are all just used to it.”
Lectures are lazy
Beyond this “Lecturing is a lot less work for everyone….they are the lazy person’s approach to education. Both lectures and listeners agree that neither of them wants to do much work. Real work, and real doing, and real conversation, is all that matters for learning, but education is really not about learning”. Read this piece for further elaboration.
Harvard study
For once we have a solid study that covers a wide range of courses and relies, not on self-reporting but actual attendance. It’s smart, as they use a camera to identify and count the attendees. Go Pro cameras were used in four lecture halls on time lapse, with software that was verified as accurate in counting attendees. If you are in any doubt here, the count was validated against manually counted images and found to be astonishingly accurate.
Results
10 courses were studied:
1. Only 60% (average) of students attended any given lecture
2. Attendance declined over the semester, from 79% to 43%.
3. Attendance declined over week
2. Incredible variability between courses (38%-94%) 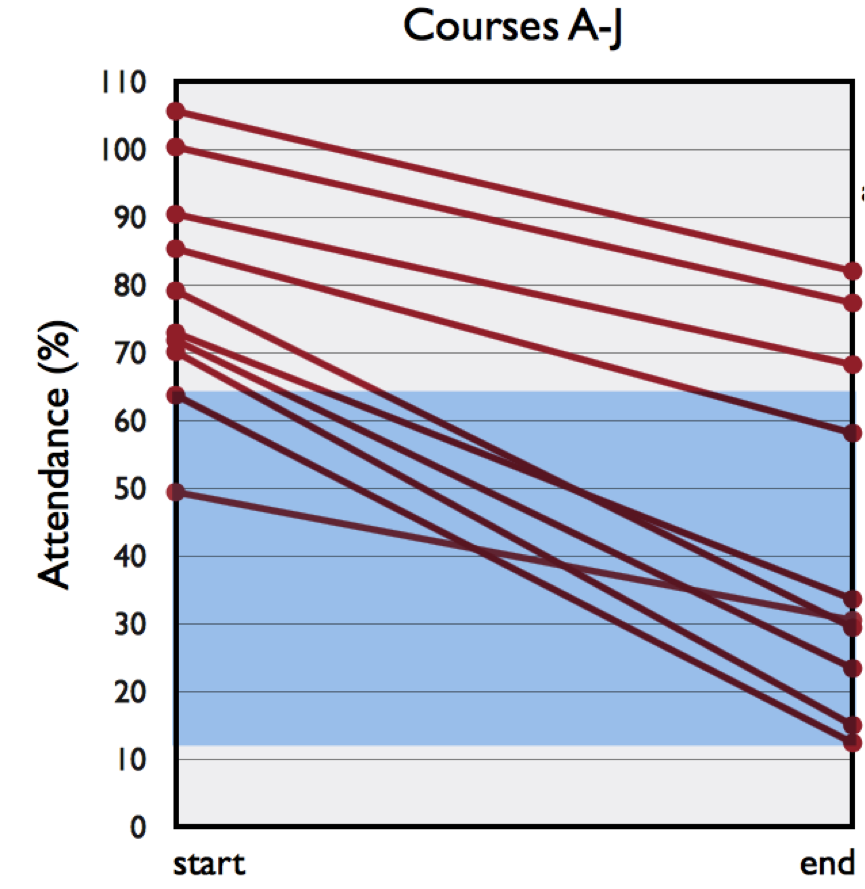 Why the difference between these two sets of courses? Attendance on the top three were graded.
Puzzle
Given the fact that Harvard has some of the best academics in the world, consistently hits a top spot in university rankings and that it costs somewhere north of $70,000 a year to attend, you’d think the students would be pretty full on when it comes to lecture attendance. If these numbers are true, imagine how bad the rest are!
at February 11, 2015

My suspicion is that this is largely replicable across institutions in the US and UK. But what's the root cause? Im not sure it is wholly "the lecture" (which is conflated here as a topic).... children go to school because they have to.... for university they don't, and many opt not to. Why? Lack of motivation, boredom, PT job (see BBC report today), too many classes, assessments. In fact many of the same reasons that people drop out of MOOCs..... if MOOCs cost money would we see the same levels of disengagement? Probably, because this is also replicated across other sectors like CPD (O god!) and fitness training. How many people sign up to a £40pm contract but not attend? The analogy is a good one to learning - yes you can supply the facilities, the personal trainer, the opportunity - but unless you put the effort in you can't expect to get fit.

The expansion of HE has led many to HE who are not independent learners and perhaps therein lies the problem - students expectations of HE are not what the sector is currently offering. So the sector needs to change but, actually, maybe some students shouldn't be there.....

P.S. And as an afterthought, couldnt agree more that league tables are a sham that say nothing about the learning experience. Many students select their "top 5" from the highest points score they think they'll get then choose based on campus and accommodation!! And as odd as it is in the UK, this is the FIRST point at which we (by and large) stream students based upon ability.

I attended a year of Engineering MAths lecturers in 1st year in 74/75 - I never attended another maths lecture for the rest of my course. I got the notes every evening and too about 80 minutes to go through each lecture at my own pace. Students may choose not to attend because they actually have better strategies.

Can someone actually define what a lecture is? I have been teaching at high level for 17 years and I don't think I ever delivered one.

Ask any student - the 50 minute to 1 hour talk (sometimes longer) without interruption delivery. It's that simple. Not everyone does this but the majority do.

A lecturer is one who talks in other people's sleep.

The results mirror what's going on in Germany, too, where lectures (in a nutshell: monologues) last 90 minutes.

"We lecture because we always did." Correct. And we actually do have data on the effectiveness of lectures vs. actually teaching a course. It’s just that the data remains where the teaching is – in K-12 institutions. There are plenty of teachers who’ve gone to teach K-12 and the lecture format worked for them because many didn’t actually learn to teach using K-12 teaching methods that included hands-on instruction with manipulatives and charts and such. Many, like my old Spanish teacher just talked and we listened. Back in the old days they could do this because they could get away with it and that’s just the way many “taught”. But the majority of the K-12 teachers I knew, mostly the ‘good’ ones, kept lecturing to a minimum. When I went to college is when I realized how poor college “instructors” were at teaching anything. And it’s precisely because they are NOT teachers and, sadly, they are proud of NOT being teachers because, hey, they are “instructors” or, excuse me, “professors,” though this wasn’t actually the case for many of my courses as many of the instructors heading the freshman and sophomore lectures were grad students with little to no experience at any sort of teaching methodology. The professors were off doing their research or publishing or maybe just out at the pub or whatever they did to justify their middle class salaries and government funded grants. Two things I loathe to sit through after finishing college – a college lecture and a Sunday sermon of more than 20 minutes (particularly in Spanish) . Pick your poison. Either will lull you into Hades.