Although I have serious doubts about putting Finland on a pedestal, and have argued that it is finished as a role model in education, and that many myths abound on teachers, class sizes and selection, they have embraced something really radical. They are moving towards a plan that may scrap subject teaching nationwide.

Roger Schank has been advocating a non-subject approach to learning, not only in schools but also in Universities, for over 30 years and I’m with him all the way. What convinced me was Roger’s historical analysis of how the curriculum came to be fixed in school and Universities – basically a ‘fix’ by a select group of self-interested subject specialists in 1892. Our system has been shaped by subject silos ever since. For a more detailed summary of Schanks work, read here.
So what are the Finns up to?
In a truly national programme, the Finns plan to introduce ‘teach by topic’, not subject. Have no doubts about the massive shift this could entail. It is a reformation in education that is taking on the subject priests in favour of more contextualized and relevant learning.
What lies behind the reform is a view of education that fouses on the learner as an autonomous agent in the real world, when they leave school. It is a bold response to the needs of Finnish society in terms of relevance, not just in the workplace but in life. “We therefore have to make the changes in education that are necessary for industry and modern society” says Pasi Silander. The world has changed, he claims, but schools have barely changed at all. It also gets educational systems out of the trap of having old, irrelevant subjects, like Latin, hanging around for no other reason than the fact that it's deeply embedded. As a strategy it has a lot in its favour.
Reboot of the system
Teaching by 'topic', or 'phenomenon' teaching, is not an new idea but no state has adopted it nationwide. But in Helsinki this has already happened for 16 year olds. A ‘topic’, such as the European Union would be used to bring in knowledge and skills around history, geography, maths through the interpretation of stats, writing skills, politics and languages. A real business problem, such as running a café, would be an opportunity to bring in maths, nutrition, as well as languages for foreign customers and soft-skills, such as communications. 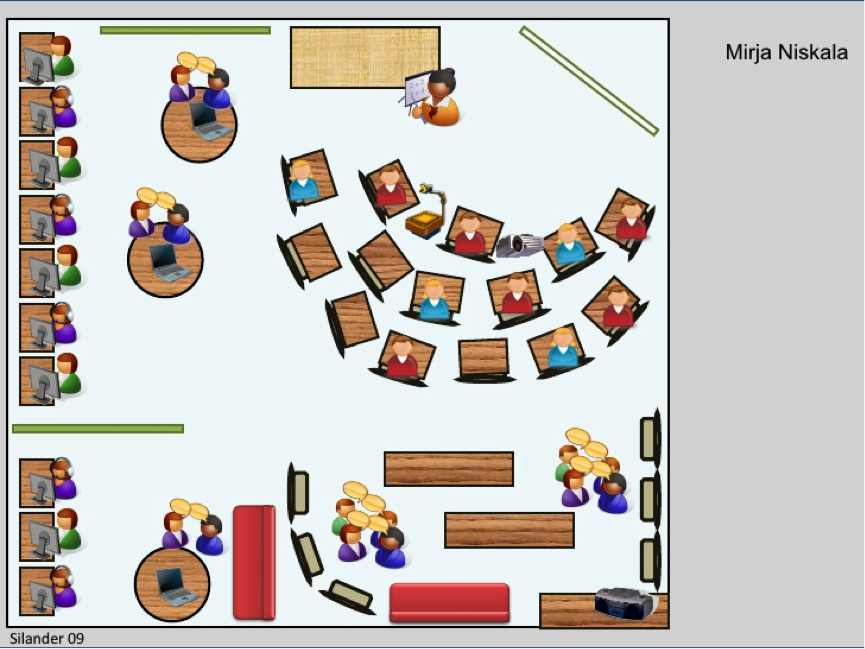 Structurally, in these sessions, there will be a lot less chalk and talk, less sitting in rows, less ‘hands up anyone' questions and much more project and group work. It involves a complete rethink and redesign of the delivery methods.
This is the start of a reboot, with relevance at its heart. The Finnish economy is in some trouble with a perfect storm of economic pressure – high public spending, collapsed Russian economy (their biggest trading partner), collapse of paper industry (internet) and collapse of Nokia. There is a sense of urgency about what they need to do – that I admire.
21st C relevance
This is not some lip service to 21st C skills, a rather hollow debate elsewhere, as schools and universities will never become more relevant by sticking to their existing pedagogic structures – period or lecture based subjects. The current debate on 21st C skills has little to do with independent thinking but merely a conceit around the idea that ‘subject’ teachers can do this using the same old, top-down methods that are currently in play. To instill these changes we must change teaching and the curriculum, not try to squeeze skills into subject silos. That will rarely work.
Teachers and teaching
In the work done so far (70% of Helsinki secondary teachers trained) Pasi Silander says, “We have really changed the mindset... it is quite difficult to get teachers to start and take the first step… but teachers who have taken to the new approach say they can’t go back.” That’s heartening. The new approach means teachers work together to plan lessons, the co-design of teaching. This helps teachers learn from each other as well as increase their skill sets.
An extra dimenion here, is the introduction of subject matter experts from outside the school. When I was a Governor at a comprehensive school I offered to come in to talk to the students doing Business Studies (I had 30 years exp) but the business studies teachers (none of whom had ever run a business) rejected the idea. I understoodd their issues, too busy, set lessons to curriculum, impending exams, but these are the sort of barriers that could be loosened up.
Students and learning
The Finns claim to have already seen improvements in learning outcomes in the trials and the project proceeds on the basis of evidence, not wishful thinking. That’s interesting and important. Driven by improving results, they hope to roll out the system nationally by 2020. This is not some little drop-in activity. The topic based projects will be substantial and go on for weeks.
Change
But will teachers and educators flock to Finland to look at this initiative? I think not. Too many vested interests. Don’t underestimate the change management problem here. Much of the sustainable innovation in education comes from small countries such as Finland, as there is a culture of constant improvement. Countries such as Singapore and Hong Kong can try things out as their domian is much smaller. You can also see this in the UK where initiatives, such as the Curriculum for Excellence, can take place in Scotland but not England. It's also to do with attitude - not just tinkering but genuinely looking for structural and long-lasting change, recognising that the people who deliver this change are not inspection regimes and auditors but the people who work in education.
Conclusion
Mark Cucher, who lives and works in Finland, makes the good point that this is, at present, a 'blueprint' from the Helsinki district, and that the roll out will happen in the Finninsh way - with lots of flexibility at the local level. Given the deep anxiety about education, teaching to the test and test factories, this is worth keeping an eye on. Let real topics drive interest and motivation, subjects often don’t. Re-energise teachers by giving them the opportunity to teach living topics which they also feel are relevant, while bringing their expertise to the party in a way that just seems so damn relevant and sensible.
at March 21, 2015

The strength of a system is its ability to renew and develop. I think this is an example of it.

What are the topics?

Update - much as I thought, this is not at all as radical as being reported. Pasi Sahlberg clarifies things very well at this link - http://bit.ly/1BqOuhk As stated, it is all about the local implementation and trust me that there are going to be teachers who fight this one and partents who are very doubtful of its wisdom.
Pity - but it is still progress, but just not really as new and radical as being hyped.