Times tables – the phony, proxy war between traditionalists and progressives

These are tablets from Mesopotania. They show a multiplication table and a practice tablet by a schoolchild. A practice that has been going on for millennia. 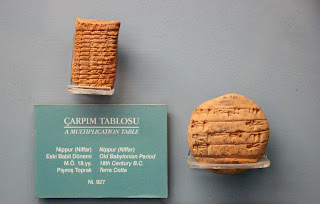 And sure enough, the ‘times-tables’ wars have erupted again. This time, however, it has become a proxy, even phony, war between traditionalists and progressives, which in turn shows that both sides are often wrong-headed. It's a litmus test for the whole debate.
Traditionalists
The traditionalist position is that there’s nothing wrong with being able to recall things and knowledge from long-term memory. This type of immediate recall is called ‘automaticity’. This is a good thing, as research shows that automatic recall, for times tables, is both faster and more accurate than other methods (counting using fingers, using tools etc.). Sylvia Steel (2004), using a sample of 241 seven to twelve year olds, showed that three major strategies were employed in this task – retrieval, calculation, apparatus. Retrieval is faster and more accurate, yet only a third were using retrieval for the basic tables. So there’s nothing wrong with teaching young people to recall a range of simple operations by recall. It makes other maths and real world problems simpler and faster to complete. (Interesting, however, that the traditionalists don't argue for division tables, as the same arguments apply.) There is one other important argument for automaticity. You may imagine that teachers always know what mental arithmetic competences their pupils have at this age – they don’t. That's why the trads want a test.
Progressives
Now here’s the rub. The progressives argue that the amount of time spent drilling this stuff will detract from the real job of teaching maths, which is far more than basic mental arithmetic. They are also right. Even mastering the task of counting up to get the answer, has its problems. Let’s say I want to add 2 plus 6. Some children start with the 2 and add the 6 using fingers or internally in their head. This is less efficient that counting up from the largest of the two numbers, namely counting up from 6 and adding 2. This is called the MIN strategy. You teach this, as it reduces computational effort. In practice, adults think they know their times tables but often use a variety of computational strategies – counting up from one they know, counting down from one they know, estimating and so on. In practice very few adults really know all (up to 12) times tables with instant recall. In fact, multiplication is far more complex than most of us imagine. Repeated addition is used by many but it is long-winded process and prone to error. Multiplication often involves a knowledge of ‘ratios’, and not simple addition and/or subtraction. I could go on but you get the point. Being able to calculate, in your head, 11x12, the progressives argue, is a more important skill than instant recall of that factoid. The trouble with maths is that it's hard to learn and hard to teach because surface phenomena hide the deeper problems. They have a point.
Also, in this decimal age one would wonder why the 12 times table is included at all (although there is an argument that some professions still use imperial measurements). The reason, of course, is just a throwback from older politicians who remember their schooldays. Beyond the10 times table, using mathematical methods (not rote) seems sensible as you have to ask at what point rote learning has to stop. On the other hand the 11 times table is a synch, so there's no great battle to be fought on that one, as most master it with ease. But why not 13 and upwards? That's when we have to think in terms of learning efficient algorithms to calculate these answers. 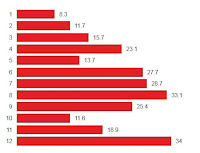 One way forward is to ask what children have the most difficulty with. As you can see, it is the 12 times table. This means that a great deal of effort has to be put into this one task. Wouldn't it be far better to focus on the cluster in the middle, namely the clear evidence that the 6, 7 and especially the 8 times tables, pose problems. Teachers and learners have limited time and bandwidth, so wouldn't it be better to get competence in this cluster, than spend a lot of time on the less used 12 times table? For a more detailed mathematical analysis of why the 12 times table suffers from the law of diminishing returns see Wolfram's detailed analysis (using maths!). 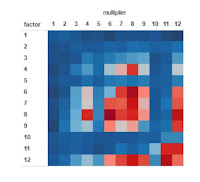 In fact we can break this down even further to show what specific calculations cause most problems. As you can see, if we eliminate the 12 times table, we can focus on the group in the middle.
On tests, the trads want a test as they claim, with some justification, that these basics are not taught properly or consistently, on the other hand, the progs argue that there's already three KS2 maths papers that cover times tables. Unfortunately they don't, as two out of three don't cover this topic, so the testing in the current system needs some work. Against this is the argument that timed tests at this age simply increase anxiety and negative attitudes about both maths and the child's ability to cope with the subject. This view is held by Professor Jo Boaler, Professor of Maths Education at Stanford.

Conclusion
This is not just a proxy war, with two sides lining up to create a false binary, it is a phony war, as both sides are right. The right balance is to climb out of the traditionalist v progressive trenches and accept that some automaticity is required, as well as some mathematical thinking. They are not mutually exclusive. In fact they are complementary. The right approach would have been to accept that tables up to ten have to be taught to ‘automaticity' (but with an acceptable error rate, where the answers can be found using other efficient methods) and to beef up the the first KS2 maths paper, hence no new test.
Bibliography
Data from Guardian Datablog which was based upon data collected at Caddington Village School (great work), subsequently written up, and freely available here for Mathematics Teaching. Thanks.

You're blogs are normally extremely well referenced, but in this one you use two unreferenced figures, one explicitly from the Guardian Datablog (http://www.theguardian.com/news/datablog/2013/may/31/times-tables-hardest-easiest-children) which was based upon data collected at Caddington Village School (Im sure they'd appreciate some recognition!) and subsequently written up (and freely available at: http://www.atm.org.uk/write/MediaUploads/Journals/MT241/MT241-14-14.pdf) for Mathematics Teaching.

As you note its the middle of the table that is hard, particularly 6s,7s and 8s. but it is quite nuanced when you look at flipping the sums, gender and time taken to answer.

Can't fault the conclusions here though - phony war is spot on.