Learning Technologies 16; the flat, the sharp & 7 things I would like to have seen

Keynotes – one flat, one sharp

Marshall Goldsmith’s been around for a very long time. I’ve seen him speak before but I’m a little weary of coachy, motivational platitudes. Don’t want to be too grouchy and I know I have to be more positive, be happy at all times, find meaning, be engaged blah blah blah. I found his SIX active questions just plain odd :
Did I do my best to:
1. Be happy?
Nope – happiness is not the state I always aspire to. I know lots of relentlessly happy people. I don’t want to be a clown.
2. Find meaning?
You’re a business coach not a philosopher – your meaning is not my meaning. There may even be no meaning in the universe.
3. Be fully engaged?
No. I often want to disengage. It’s a European thing Marshall – we don’t all want to be earnestly positive and engaged. Often we want to chill.
4. Build positive relationships?
Some of the most interesting people I have known, and know, have been misanthropic, sceptical, grumpy, anti-social and even unpleasant. I gravitate towards people who don’t always pitch their tent in the happy campers area.
5. Set clear goals?
Goals are OK but they can box you in. Many things I’ve achieved in life have been through letting go, taking risks and not sticking to goals. In fact I find people obsessed with ‘goals’ a bit blinkered; education goals, career goals, business goals, social climbing goals etc.
6. Make progress towards goal achievement?
I’d agree with this, if I knew what achievement meant. For lots of people I’ve met, it means getting a gong, like an MBE or OBE. That, for me, is playing some sort of establishment game – it diminishes people in my eyes. For others it means being a doctor, lawyer or accountant – but I would have hated being locked into career progression within a ‘profession’.
Maybe this 'keynote' thing needs a rethink. Marshall was witty but far too prescriptive for me. I’ve never had a coach and quite glad really, as I’ve made my way in the world by largely ignoring the advice of professional coaches and advisors. Get a life, not a coach – that’s my motto. 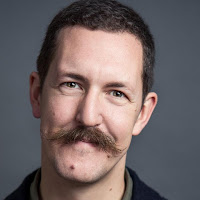 Ben Hammersly was different and most delegates thought he was sharp and excellent. I’m not a fan of ‘futurists’ who simply cull examples from the web and string them together like a necklace but his observations on AI and the rise of powerful consumer tech was compelling. This also happened to be the theme of my own talk on AI in learning, so I’m duty bound to sing his praises! He also has a nice line in direct opposition to Goldsmith, "It's impossible to be productive without being lazy at the same time," and a fine moustache –I like that.
In conclusion on keynotes, one seemed like someone from bygone days, the other seemed more focused on the future.
Conference
I’m not going to comment on the sessions, as I gave one, enjoyed the experience and everyone I saw present tried hard. Many were good, some OK.  I couldn’t attend many but the twitter feed seemed to reflect things well. One observation I would make is the format is too samey. There no real ‘debate’ where issues are thrashed out, I’d have a full on head-to-head debate at the end of each of the two days.
Exhibition
Having established itself as the most important L&D technology exhibition in the UK (WOLCE, I think, is a dead duck), what were my impressions this year? When I asked people what they thought of the exhibition, I got shrugs of shoulders and ‘nothing much that’s new’ responses. I felt the same. Before the exhibition, the twitter feed was riddled with vendor Tweets, who clearly have numpties doing their marketing. ‘Come visit Stand number XY’ (with big pic of stand), but absolutely no compelling reason in the Tweet to make the trip. That’s the problem right there. Why are you telling me to come see you? What do you have that’s compelling? Where’s the evidence that it works? Why?
LMSs
There’s dozens of LMSs. I’m not in the camp that says the LMS is dead but I am in the camp that says the LMS is not new and more than a little dull. For example, I didn’t see much evidence of xAPI being implemented (although lots of talk). Although there was an excellent session in the conference in xAPI, it remains a dark art and that’s a problem. Let’s not make the same mistakes we did with SCORM. Where was the debate about safe harbour on data that took place on the very days the conference was being held? Julian Stodd had an interesting perspective on this in his blog on LT, when he focused on the concept of big company ‘inertia’. I agree with his overall observations.
Content
Lots of people can make e-learning but simply decorating your cake with the hundreds and thousands that is ‘gamification’ is not enough. ‘Gamification’ in technology based training has been around for 30 years. Few have really grasped the importance of deep game design, many plump for patronising Pavlovian techniques. What I wanted to hear were alternative models around curation and automatically, AI-generated content. What I heard was ‘it works on every device’. Oh yeah – try it on my Apple watch then. The best piece of e-learning I’ve seen this year was by a company that wasn’t even there. The innovations around AI and adaptive learning were noticeably absent (apart from Filtered). A few had VR on the stand but it tended to be stand eye-candy. Don’t flash the tech if you don’t know what you want to do with it. I want to see ideas and applications. So, I hear you say, it’s easy to be critical, how about some suggestions, so here goes.
7 things I would liked to have seen/heard about?
1. Training levy
This will hit all of the major employers who attended but nothing mentioned anywhere. People are sleepwalking into the future. This is a serious issue and needs to be unpacked and discussed.
2. Workplace MOOCs
4000 MOOCs and 45 million enrolments, with a massive move by the major vendors towards vocational and workplace learners, yet barely a peep in the conference. That was very odd.
3. Open-source
We need a clearer presentation of open-source LMS, authoring tools and content. They exists but are often drowned out by the big vendors.
4. Microlearning
It’s not new but there’s a lively debate to be had around chunking and this form of learning. What is it really? How does it relate to the delivery of deep content etc.
5. EdTech
Maybe something on small companies where lots of 5 min pitches could be presented to potential vendors or investors. This is where the real action is.
6. Evidence not bunk
A good session on evidence-based psychology of learning, dismissing the bunk. This would have chimed in well with Clive Shepherd’s appeal for more ambition and integrity within the L&D community.
7. Millennials
I met a girl at the exhibition and she was in the crowd in the pub in the evening. She was always being paraded as a ‘Millennial’ in L&D but she had insights which we oldies have missed. I feel the need for some learner voices around devices, content etc.
Conclusion 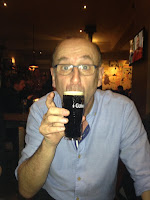 My summary has been as a critical friend, as I’m not in the Goldsmith camp but in the ‘seek, to strive and not to yield’ camp - it’s good but let’s make it better. The things I love about Learning Technologies are; meeting stacks of people, ending up in the pub and coming away with a bunch of new friends and a clutch of conversations that spark off new ideas. As always, it’s the people that matter. Oh, and the excellent Donald Taylor - who is always ready to listen.

Enjoyed this read! Was hoping you'd have seen our research on the consumer learner at work (people who pay out their own pocket to learn), which might relate to what you've covered above? Would be great to hear your thoughts: www.towardsmaturity.org/in-focus/2016/consumerlearner - email us if you fancy feeding back or have questions!