We have fetshised 'Leadership', we're all leaders now, rendering the word meaningless

We have fetishised the word 'Leader'. Everyone is obsessed by doing Leadership training and reading 4th rate paperbacks on this dubious subject. You're a leader, I'm a leader, we're all leaders now - rendering the very meaning of the word useless. What do you do for a living? I’m a ‘leader’. Cue laughter and ridicule. Have you ever heard anyone in an organisation say, We need to ask our ‘Leader’? Only if it was sneering sarcasm. It was invented by people who sell management training to fool us all into thinking that it's a noble calling but is it all a bit phoney and exaggerated and does it lead to dysfunctional behaviour?
Weasel words
When I first started in the learning world over 35 years ago ‘Leader’ was not a word I heard - ever. There was plenty of good management theory and training, and most people who headed up companies were called Managing Directors and in Education Vice-Chancellors and Heads. Then the tech bubble came along in the 90s and we all went gaga for snazzy, new US terms and everyone swapped out the sober and descriptive MD for CEO (Chief Executive Officer) (I’m also guilty here). The word ‘Chief’ is an interesting choice. You were no longer someone who ‘managed’ others but the big chief, big cheese, a big shot. It was then that another word rose like Godzilla from the depths of the cess pit that is HR lingo – ‘leader’. Suddenly, managers weren’t people with competences but top dogs who ‘Led’ people towards victory. Brian the Head of Geography was now a leader. Mike, senior manager in accounts, was now a dog of war.

Followers
Using the word 'Leader' creates a sense of us and them, a sort of feudal relationship. Leaders are now the aristocracy in an organisation, everyone else is a kulak, working serf or follower. In a sense the word infers that the people you lead and manage are followers. It sets you apart from other people, not a great quality in management within an educational institution. In fact, it is the exact opposite of most qualities you need to manage an organisation or school. Of course, leadership trainers will tell you that it’s not about creating followers, but in practice this is the effect the word creates and management trainers jump through hoops to reconcile this leader/follower dilemma. We need to connect with people not lead and follow.

Leadership courses
When the language changed, so did the training. HR bods and teacher trainers were suddenly the leading thinkers on leadership. HR and training departments saw an opportunity to big-up their status by breeding, not managers, but leaders. Middle managers went on ‘leadership’ courses run by people who had never led anything, except flipchart workshops. In practice this meant cobbling together stuff from existing management courses and adding a veneer of specious content from books on leadership. Winging it became a new course-design methodology and every management trainer in the land suddenly became a leadership trainer.

Standford Professor Pfeffer’s book Leadership is BS should be required reading for all Leadership trainers and consultants. He puts the blame for all the hubris around Leaders and Leadership firmly in the world of training, a confusion of nostrums, stories, fictions, anecdotes, promises, glib simplicities, bromides, romanticism, myth-making feel-good nonsense, His solution – realism. The real world is much more complex and messy than the Leadership theorists and trainers would have you believe. The reality of most Leadership training is that it peddles inspiration rather than real competence. Worse still, those that value a quieter approach, with some modesty and humility, are seen as not having the right qualities. Competence gets bowled away by confidence.
Leadership books

At the theoretical level, the idea that there is a body of knowledge and practice called ‘Leadership’ is laughable. It’s the word that launched a thousand bad books. Middle managers and senior teaching staff went crazy for books they’d never dreamt of reading. I’ve seen everything from Meditations by Marcus Aurelius to Clausewitz touted as serious management texts. I knew it had all gone seriously wrong when I saw a commuter, with a bad suit and combination lock briefcase, on the 7.15 from Brighton to London, reading ‘The Art of War’ by Sun Tzu. What next? Hitler, Stalin… How to reset your company to Year Zero byPol Pot?
What we find is an astonishing lack of evidence and valuation. Leadership has the characteristics of a cult or creed rather than competences. It is what gave us Trump and the Art of the Deal. Witness the greed that enveloped Vice Chancellors, when they were awash with cash from student fees. This hasn’t gone away.
Led to the abyss
Managers loved their new found status as little generals, leading the troops. They responded to the training as narcissists respond to flattery, with gusto. I don’t think it’s an accident that this coincided with the megalomaniac behaviour in the banks where ‘leaders’ fed on a high-octane diet of ‘leadership’ training, ‘led’ us into the abyss of financial collapse.  I well remember the managers at RBS getting ‘Leadership’ training and turning into the monsters they became, mis-selling, stupid strategies on acquisitions, losing touch with reality, and a huge vacuum in competences. These ‘leaders’ adopted delusional strategies based on over-confidence and a lack of reality. There’s a measurable price to pay for believing that you’re destined to ‘lead’ – it's called realism. Managers who now saw themselves as ‘Leaders of the pack’ engaged in behaviours that flowed from the word. They became driven by their own goals and not the goals of the organisation or others. It also led to greater differentials between leader and follower salaries, witness the gross gaps in income between our new 'leaders', in business and education,and the rest. Leadership has led to rising inequalities.

Conclusion
It's the language of narcissism and excess. We have seen leaders in every area of human endeavour succumb to the tyranny of ‘leadership’, in business, politics, newspapers, even sport. In finance, for example, rather than focus on competences and sound management, fuelled by greed, they focused on personal rewards and ‘go for broke’ strategies. So what happened to these ’leaders’? Did they lose their own money? No. Did any go to jail? No. Are they still around? Yes. Have we reflected on whether all of that ‘leadership’ malarkey was right? No. In education we saw Vice Chancellors and their sidekicks, on so-called Remuneration Committees, balloon up senior salaries. Let’s get real and go back to realistic learning and realistic titles. The Academy system has seen obscene salaries and an increase in corruption, all in the new 'Leadership' class. In politics (Trump. May, Boris, Corbyn), finance (most of them), sport (FIFA), entertainment (Weinstein et al) and education (Vice Chancellors, Academies), we have fetishised leaders and there has been a disastrous loss of faith, as the greed, corruption, self-aggrandisement and narcissism went through the roof. Time to call it out.
at February 19, 2016

Spot on as usual. We can't quite ignore the fact that leader in German is still 'führer'...

The leadership "thing" is like any popular philosophical sea change: There are a few legitimate players in terms of thinking and practice, and the rest is band-wagoning to generate quick dollars.

Part of the reason the leadership focus is so common now is due to the "de-verticalization" of organizations. Orgs have transferred those qualities across the organization and are now doing their best to confer those qualities to people that, 20 years ago, didn't have them.

One of the other up-and-coming human performance/training philosophies that I'm seeing more and more often is getting employees to think like entrepreneurs. That's an offshoot of the leadership movement, but at the very least - right now anyways - there seems to be a good focus on how to address failure constructively on the individual and group levels.

Thanks Donald. This is direct, and well argued - as we have come to expect. I for one am certainly not comfortable "following" anyone. Where I have come to see specific people as of special value to me in my professional life, I refer to them as 'mentors'. (But they don't need to be in my place of work - in fact it's often better if they are not...)

Welcome aboard! Thank you, What a fab blog. If you don't mind I'll quote you here and there as I torment the Leadershippers in various places. I enjoy making pseudo-serious comments (sarcasm with long technical sounding made up words) on their various social media ramblings only to sit back and watch the idiots agree wholeheartedly with crap I literally made up while typing it. My cherry on the cake is to refer to their industry as Leadershit. A small typo that says so much!

Thank you for this and every other beautiful utterance on your blog! :)

I create organizational training, and every so often people ask if I deliver Leadership Trainings. My usual response never lands the gig: “As soon as someone can define what Leadership means within your organization and how you measure it, sure.” Strangely, no one ever wants to talk about that.

Training managers to be more effective at managing is one thing, but as near as I can tell every program on "creating leadership" is built upon selection bias its premise. 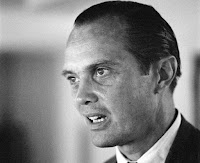