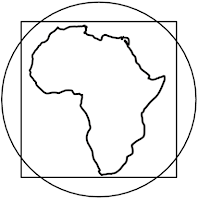 Egypt has always been fond of grand gestures, from the Pyramids to the Aswan Dam, so it was fitting that we heard from Ismail Serageldin about the wonders of the modern Library at Alexandria (he’s the boss) – but I wonder. He talked about the Rhind Papyrus, where the Egyptians showed how to square the circle. But what circles is this institution squaring? It seemed to be more of a relic of the past, with its 15 Institutes, 19 Museums and 7 Libraries. It seemed to look more to the past than the future. He did, however, have one good line; that, in Africa,  Rhetoric, Plans, Visions and Announcements are not equal to ACTION.

1. Squaring the scale circle
On that note I was far more interested in Toby Shapshak, who I spoke to later. He was looking to Africa’s future and saw everywhere, signs of innovation that need to be encouraged. He highlighted mobile banking, where even a custom’s official had asked him for a bribe via the mobile banking app M-Pesa. Interesting tale, as that is the first circle that has to be squared - scale. You have the technology, what Africa now needs is a rapid ramp up, not of buildings and institutions but scalable internet infrastructure. It needs connectivity, not concrete.
2. Squaring the education circle
Shapshak was critical of the rigid formal education he sees across Africa, archaic content, old textbooks, rote learning and poor teaching. The Library of Alexandria seemed a long way off from the innovation of Elon Musk, an African who really is changing the world. He was an outsider from Pretoria, not someone from within the formal education system. In fact he was mercilessly bullied at school and eventually dropped out of his post-graduate degree after 2 days. He was self-driven, not driven by institutional goals. And boy, what a success – SpaceX, Tesla, SloarCity, OpenAI. Throughout the conference I heard abstract presentations from academia, mistaking rhetoric for action, papers for innovation, research for action. The innovation in Africa will not come from African Universities. It will come from their entrepreneurial culture. Sure you need the bedrock of good education and educational institutions but don’t buy into the myth that this is the true path for future prosperity.
Indeed the almost obsessive focus on University education may even exacerbate inequalities, as the elite get the opportunity while the vast majority do not. At all of these conferences the academic contingent has a disproportionate voice, as they are often the only group that are funded to attend. Africa’s greatest need is for vocational not academic education. It cannot afford to make the same mistake as the rest of us and ignore vocational learning. Continuing to build Universities, without an adequate skills base, is not sustainable, as the Universities, in my view, will not be the place from which innovation comes. This point was stated to me, time after time, by the young entrepreneurs at the conference. University courses in entrepreneurship – that is rhetoric, not ACTION.
3. Squaring the geographic circle
There is no Africa. There is a landmass called Africa, but there is a huge divide between the largely Islamic, northern Africa and sub-Saharan Africa. This is causing huge problems in war zones such as South Sudan, Somalia and northern Nigeria. The very real refugee problem is one product of this fault line and education for refugees was discussed in detail. Many of the people at the conference had to travel to the Middle East, Turkey or Europe to get to Cairo, from their African countries. This is, in some ways, a divided continent. One of the problems with the African Unions’s 2063 goals, is that this is the age when 50 year plans are trumped by actual progress on the ground. The 2063 African Union goals are all very well but the rhetoric of unity does not equal ACTION.
4. Squaring online learning

Africa cannot allow learning to be totally contained within the box that is the traditional classroom. Like mobile banking, it has the opportunity to think and act out of the box, turn its problems into opportunities. This needs less attention on device-led projects such as Mitra’s Hole in the wall, Negroponte’s tablets into Ethiopian villages or OLPC. It needs to avoid ‘device fetish’ and build infrastructure. Online infrastructure, connectivity, low tariffs and wider access, will create the soil within which African innovation can grow. Grab this opportunity, to reshape education, like Tunisia, with a mandate for a percentage of all learning to be delivered online. Take the lead from Kenya, with its East African cloud-delivered content service. Focus, like Zimbabwe, on exemplary teacher training with compulsory training on the use of technology. I heard all of these policies when I was on the panel in the closed Ministerial session. These were policies I rarely hear outside of Africa. The politicians have some vision here – we must share these policies and turn those policies into ACTION.
5. Squaring the NGO circle
Another group that get a disproportionate voice at African conferences are NGOs, again because they are well-funded and can afford the travel. Don’t get me wrong they often do a great job but they are far from the solution to most problems. In fact solutions are rarely optimised as they are driven by the funding agendas of the NGOs, who often just do their own thing. Africa needs to free itself from this dependency. Of course, this is easy to say but difficult to do. Education, in particular, can become the plaything for external and religious groups, Christian and Islamic. Rather than closing young minds down, they need to be opened up to the possibilities of the future. This will only happen when education becomes well funded from within African states. NGO support may, in the long-term, simply exacerbate the problem.
6. Squaring tradition with inclusivity
We ended the conference with a wonderful debate, pitching ‘tradition against ‘inclusivity’. Formally, it was two men versus two women. Unfortunately, most of the men seemed to favour tradition, the women inclusivity. It was an entertaining debate but beneath the surface lurked the question of gender equality, FGM and poverty. Bizarrely some in the room claimed that Ancient Egypt was some great example gender equality. Talk about rewriting history! This was several thousand years of rarely uninterrupted patriarchal rule. When the occasional woman did get a chance, like Hatshepsut, all signs of her existence, statues and inscriptions, were meticulously destroyed. Progress on inclusivity on gender, gay rights and other issues, still has a long way to go. Thankfully, my good friend Maggie, from Namibia, with her Egyptian colleague, Amany Asfour, won the debate, supporting inclusivity above tradition.
7. Let’s square the circle
I have been coming to e-learning Africa for some time and have learnt one lesson from my many friends there – that in this vast continent, there is one thing that has already squared the African circle. That one thing is the internet. It gives the promise of scalable solutions for the problems which exist on a massive scale across this continent – in education, healthcare, agriculture, energy provision, water provision, tourism and resources. From Cairo to Capetown, Lagos to Nairobi, and beyond, one wonder binds us all – the internet.
Africa was where the first technology was invented – the tools and technology that shaped our modern brains, technology has come full circle and returned to envelop the whole of Africa. Mobile use is only one example of leapfrogging. Elon Musk has just announced ‘Open AI’ – I would hope that this sort of leapfrog thinking, from an African, can be embraced and exploited in Africa, in the same way. There is no shortage of eager young people, 3 in 5 are under 24, and with Africa’s population due to explode, that’s where one has to look. Not to the tired old men in dark suits but to Jessica, Toyose and Maggie. The World Bank estimate that a 10% increase in broadband access results in a 1.4 % increase in GDP. Way to go.


I’ve tried to put across my impressions without either Afro-pessimism or Afro-optimism, but with Afro-realism. Now that the circle is truly squared, let’s get on and take some action. See you all at next year’s E-learning Africa.
at May 28, 2016

It would be interesting to hear of what other signs of innovation were referenced at the conference. The successful spread of mobile banking in many African countries has almost had a negative effect on any discussion of technology in education or other arenas. It promotes the idea that leapfrogging is better than incremental change. Do we know of any other good and useful examples of leapfrogging, especially in education? It is unfortunate that large scale introduction of tablets into primary schools in several African countries (I think Kenya is the latest) is based on so little evidence.

Good point. Toby Shapshak had a ton of examples but I made your point in the Ministerial meeting - that the mobile innovation has become too easy a narrative. Hh showed lots of non-educational examples and there were plenty at the conference who were doing good things in e-learning - MOOCs and so on. Even at Ministerial level, there were policies that were fresh. However, as I say in my pice, there is still the illusion that innovation in education comes from Universities - it can but that is only a tiny part of the story.

I reaally enjoyed this post, I was at elearning Africa in 2011 and saw hiw much ficus there was on technology as a magic bullet. As well as the scalabilty issue I think there is a sustainability issue. Many projects are 2 to 5 years abd wheb funding stops thr project sponsers move on and there is no more thought given. I am glad to hear that yoy attend regularly, next time I am there I hope I have the chance to say hello.