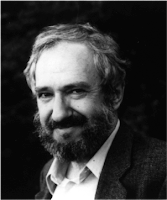 Seymour Papert was a constructionist (not to be confused with constructivist), who worked with Jean Piaget and built on his theories to redefine how education could function on a constructionist basis. The Logo programming language was a tool he wrote to support this approach to learning and he was been a stern critic of traditional schooling. Politically socialist, active in South Africa, he claimed that his work in education came from observing irrational racism and he worked with disadvantaged groups all of his life. He also cofounded the Artificial Intelligence Lab at MIT with Marvin Minsky and was a founding faculty member of the MIT Media Lab.

Constructionism
Constructionism implies a hands-on approach to learning, to learn by doing, even in abstract subjects like mathematics, where digital tools allow one to play with real world machines and build virtual models. The learner comes up with a solution to problems and makes things happen in the real or digital world. His constructionism saw learners as using the physical (or virtual) world and external objects to learn, as opposed to the more purely cognitive and mental theory of constructivism. Very much a precursor to the maker movement, where learners construct, use and code actual physical objects, such as controllers, mini-computers, robots and so on.
Technology and learning
Among the first to realise, and create projects, that saw computer technology as realising new pedagogies, he was a keen observer of how children actually learn. The technology, he claimed, would bring electronic resources, interactive video and virtual reality, allowing new forms of learning, with schools having to adapt to these changes. For Papert, computers and the web are not merely tools but ways of thinking, in the same way that writing is a way of thinking and expression.
Logo
To encourage problem solving through play Papert wrote, with Wally Feurzig, programming language that controlled a Logo Turtle. This language has more recently been used to programme the Lego ‘Mindstorm’ kits, named after one of Papert’s books. These commercial kits allow you to put together blocks with motors, gears, sensors and a computer, then programme it to do things. It is this interest in technology, put to use in education, which fascinated Papert. As a major player in the OLPC (One-Laptop-Per-Child) initiative, he also tried to take these ideas to a wider, global audience.
Critique of schooling
For Papert, school is a process of regimentation through age segregation, a fixed view of knowledge, of what is ‘right’, too teacher-led and too much focus on academic, abstract thinking and reading, pushing what he calls the ‘epistemology of precision’. For Papert, children should play and personalise their learning through play, improvisation and doing. They should be encouraged to see knowledge as incomplete and accept vagueness and imprecision.
As a mathematician he is highly critical of both ‘what’ maths is taught and ‘how’ it is taught in schools. Most of what is taught, he thinks, is irrelevant to most people. He thinks this is the result of paper-based learning – the ability to write and manipulate symbols on paper. How it is taught, is also flawed, as it does not connect with the real world.
Knowledge machine
As part of his constuctionist vision, he speculated that a Knowledge machine could be built, that takes anyone, especially children, into a learning environment, where they can interact, problem solve and develop. His knowledge machine predicted the virtual environment that appeared as the world-wide-web and the move towards virtual learning worlds. In this he was prophetic, as the web produced devices and resources that were almost unimaginable when Papert first realised his vision.
Criticism
If one does not believe in constructionism and social constructivism or the strand of educational thought that comes from Piaget, Vygotsky and social constructivists, then Papert may hold little sway. The arguments against his ideas and methods are generally those that are against social constructivism; that it can be time consuming, wasteful and can lead to disadvantaged learners losing out in collaborative work. The OLPC project has also been the subject of many trials around the globe, yet none have been shown to have led to significant increases in educational attainment.
Conclusion


Papert was deeply interested in the psychology of learning and his practical work and theorising on education was built upon a Piaget-inspired theory of constructionism, which shaped his subsequent work on Logo, Lego and learning. He was also prophetic on the use of computers and the web in learning, claiming long before it was fashionable, that every child will have their own, personal computer. In many ways he took learning theory into the brave, new, digital world of computers and has been influential on many teachers and online learning specialists, who built upon both his work and enthusiasm.
at August 01, 2016