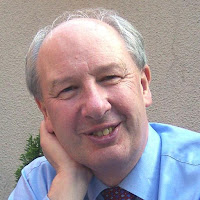 Despite the excellent Chair's instruction, at Online Educa in Berlin, NOT to replay the debate an express personal opinions, we had a caricature and patronising view of 17.4 million Brexit voters from the first two speakers who ignored his appeal. They both reran the rhetoric.
The former Head of HE for the British Council laid into Brexiters “All the correct people said it was dangerous… obvious lies" Then a French woman, who works for a French Minsitry, and had a thin as rice paper grasp of why Brexit has happened, literally showed us images of the Brexit bus and a cartoon accusing Brexiters of being stupid "They all voted on what they saw on the side of a bus" followed by a patronizing cartoon again accusing Brexit voters of being idiots. On and on the patronising slides went - basically 'Woe is me - I'm smart, 17.4 million are stupid', not realizing that the stupidity lay on their own naïve views. Thankfully, Professor Paul Bacsich, who knows a thing or two about such things, came to the rescue, as the last speaker, with some acute observations on Brexit and Higher Education. He was neither pessimistic not optimistic - just realistic. This made a welcome change from the mixture of arrogance and self-pity that seemed to hang over the debate until this point.

Research
Unlike other sectors, HE has already had several Brexit-related concessions from the British Government. One is on Higher Education research, where the Government has agreed to underwrite Horizon funding. In early August the Chancellor Philip Hammond promised, to the universities participating in Horizon 2020, that the Treasury will underwrite the payments, even when specific projects continue beyond the UK’s departure from the EU. This was, in my view, quite generous, as the overvaluation of forced collaboration was often a recipe for 2nd and 3rd rate research. In practice I feel that research comes from all sorts of sources and direct funding by the UK Government may result in more focused, high quality research than the fixed EU structures offer. I've lost count of the number of people who roll their eyes and confirm that much EU research is a total waste of time.
Student support
There was a second promise in October, that European Union students, applying for university places in the 2017 to 2018 academic year, will still have access to student funding support. The UK government has also just announced that the country’s research councils will continue to fund postgraduate students from the European Union whose courses start in the next academic year. There is a utopian view that there is some sort of equitable arrangement across Europe for students moving from one country to another. In practice, it is an unholy mess. With Brexit, it will simply be slightly less messy. The Scots, as Paul said, are likely to go it alone, with some supermarket offer to EU students, which is all about market share.
Fees
English fees are the highest in Europe, and Universities basically charge what they want, within a cap. That is a disgrace but it's a fact. This has nothing to do with the EU, as education is a devolved issue in both the UK and EU. The fundamental problem is raising fees and costs, which Universities are doing, EU or no EU. As Paul says, the real issue here is the rising costs, which needs to be addressed. The justification of very high fees for international students is not at all clear, in terms of pedagogy and services that they get. Brexit may be the jolt to the system we need to address this problem.

There is also the serious issue of EU students having racked up record loan debts of £1.3 billion, a 36 per cent increase from a year earlier. About 11 per cent, or 8,600 former students from the EU have failed to repay their loans after graduation. Not many know that EU students get full student loans from the british Government. There is no effective policy forcing them to pay when they move abroad. This, effectively, has meant the taxpayer foots the bill. That, of course, will disappear post-Brexit,
Student numbers
Visas already existed, and as Universities had to live with this anyway, Paul didn’t see this as catastrophic. There will be drops in numbers from the EU but this means switching marketing to other countries. Students will have to pay higher fees in the long run but no higher than many other foreign students and we do not have to fund their loans. Paul speculated that there might be a new "moderate fees" agreement covering the whole 'European Higher Education Area', a region which few know about but much bigger than the EU and nothing specifically to do with it, and in which the UK remains a member.
Erasmus
Erasmus projects, according to Paul, are not value for money. I agree. I feel there is little to be gained in terms of social inequality by flying rich students around Europe. These systems are always gamed as the sharp elbows of the middle class, eat into the funds. The fact that offices were set up in each and every country has made it cumbersome and expensive to administer. No great loss and if there are any merits in the system, couldn't the UK buy into a simplified version?  Does anyone know that Turkey is a full Erasmus plus country? In fact there are five non-EU countries in Erasmus+.
Conclusion


The mistake is to simply defend the status quo and fight for things that will, in practice, change. Far better to grasp this opportunity to change tack. The UK has a world class Higher Education sector, not a European Class sector. This may loosen ties with Europe but force us to look outwards to the bigger pool that is the rest of the world. For example, research and student mobility could more easily link EU countries with US and Commonwealth countries. Indeed the EU used to have EU-Canada and EU-US schemes but dropped them, due to pressure from eth EU. UK funding could bring them back.
Unfortunately, Paul didn’t see visible public signs of Universities doing much rational analysis and planning for Brexit. In fact (thankfully not all) institutions still seemed to be hoping that the whole thing will just go away. Paul hoped that the various quiet chats he had had or overheard in the last few months (continental campuses, online partnerships) and small studies (EU-Commonwealth comparisons) he had been involved in would accelerate, once Article 50 had been invoked.
My view echoes his: Don’t panic – the world will go on. Before there was an EU – we managed. It might not be easy in the next few years but we will manage.
at December 06, 2016