AI isn’t a prediction, it’s happening. How fast - what do the experts say? 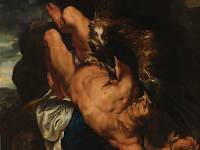 AI predictions have been notoriously poor in the past. Speculation that machines will transcend man has been the subject of speculative thought for millennia. We can go all the way back to the Prometheus Bound, y Aeschylus, where the God Prometheus is shackled to a rock, his liver eaten by an eagle for eternity. His crime? To have given man fire, and knowledge of writing, mathematics, astronomy, agriculture, and medicine. The Greeks saw this as a topic of huge tragic import – the idea that we had the knowledge and tools to challenge the Gods. It was a theme that was to recur, especially in the Romantic period, with Goethe, Percy Blyth Shelly and Mary Shelley, who called her book Frankenstein ‘The Modern Prometheus’. Remember that Frankenstein is not the created monster but his creator.
Prometheus myth, in one of the oldest Greek tragedies we have,

In many ways the rate of prediction is still largely in this romantic tradition – one that values idle thought  and commentary over reason.
There is something fascinating about prediction in AI, as that is what the field purports to do – the predictive analytics embedded in consumer services, such as Google, Amazon and Netflix have been around for a long time. Their invisible hand has been guiding your behaviour, almost without notice. So what doe the field of AI have to say about itself? Putting aside Kurweil’s (2005) singularity, as being too crude and singularly utopian, there have been some significant surveys of experts in the field.
Survey 1: 1973
One of the earliest surveys was with 67 AI experts in 1973, by the famous AI researcher Donald Mitchie. He asked how many years it would be until we would see “computing exhibiting intelligence at adult human level”. 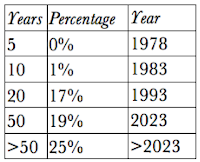 As you can see there was no great rush towards hype at that time. Indeed, the rise in 1993 turned out to be reasonable, as by that time there had been significant advances and 2023 and beyond, seems not too unreasonable, even now.
Survey 2: 2006 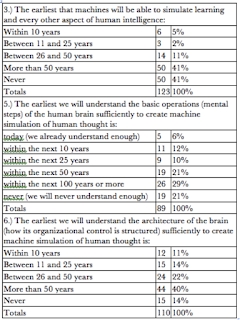 Jumping to Moor (2006), a survey was taken at Dartmouth College, on the 50th anniversary of the famous AI conference organised by John McCarthy in 1956, where the modern age of AI started:
Again, we see a considerable level of scepticism, including substantial numbers of complete sceptics who answered 'Never' to these questions.
Survey 3: 2011
Baum et al. (2011) took the Turing Test as their benchmark, and surveyed on the ability to pass Turing tests with the following results:
50% probability:
Third grade - 2030
Turing test - 2040
Nobel research – 2045
Given the fact that the Todai project got a range of AI techniques to pass the Tokyo University entrance exam, this may seem like an underestimate of progress.
Survey 4: 2014
The most recent, serious attempt, where all of the above data was summarised of you want more detail, was by Muller and Bostrum (2014). Their conclusion, based on surveying four groups of experts, was:
“The median estimate of respondents was for a one in two chance that high- level machine intelligence will be developed around 2040-2050, rising to a nine in ten chance by 2075. Experts expect that systems will move on to superintelligence in less than 30 years thereafter. They estimate the chance is about one in three that this development turns out to be ‘bad’ or ‘extremely bad’ for humanity.”
So still some way off, 50:50 on around 30 years and getting more certain for 50 years hence.
A particularly interesting set of predictions in this survey was around the areas of probable advances:
Cognitive science 47.9%
Integrated cognitive architectures 42.0%
Algorithms revealed by computational neuroscience 42.0%
Artificial neural networks 39.6%
Faster computing hardware 37.3%
Large-scale datasets 35.5%
Embodied systems 34.9%
Other method(s) currently completely unknown 32.5%
Whole brain emulation 29.0%
Evolutionary algorithms or systems 29.0%
Other method(s) currently known to at least one investigator 23.7%
Logic-based systems 21.3%
Algorithmic complexity theory 20.7%
No method will ever contribute to this aim 17.8%
Swarm intelligence 13.6%
Robotics 4.1%
Bayesian nets 2.6%
Not only is this an interesting list of promising areas of endeavour in AI, given the recent advances in many of the top six on this list, they were prophetic, if not over-cautious.
Conclusion
Putting aside the general chatter from journalists, who seem to be more driven by clickbait titles than evidence, it would seem that most experts are in the 30-50 year range for real advances. My own view is that since this last survey, we have evidence that it may be somewhat quicker. There are several reasons for this claim:
1. Success of machine learning and deep learning
2. Success in NLP
3. Alignment of major tech companies towards AI that will accelerate progress
4. Consumer electronics as a driver
1. Success of machine learning and deep learning
The success of machine learning and deep learning has been demonstrated in beating the GO champion but more importantly, there has been a rush of success in the field on the development of efficient algorithms in this area. Progress in both supervised and unsupervised learning, as well as reinforcement learning, has produced real, demonstrable progress.
2. Success on NLP
A leap forward with Natural Language Programming has resulted in significant improvements in the analysis, processing, translation and output of natural language, allowing applications to be operable in real world environments. We have now entered an age where we can, and do, speak to computers and get speech responses. Translation is getting very good, realtime translation looks doable. This brings a natural and frictionless interaction, literally in the case of Amazon Echo, to the table.
3. Alignment of major tech companies towards AI that will accelerate progress
IBM, Google, Facebook and Microsoft have all, essentially realigned themselves around AI as the primary driver in their businesses. This is also true, but to a lesser degree with Apple. Most other major tech companies, such as Cisco, Intel, Salesforce etc. are doing the same. This means an acceleration of progress, as acquired companies will be well capitalised and put in contexts that allow them to scale. It also accelerates research and development within these companies towards realisable business goals, namely products that work in the real world.
4. Consumer electronics as a driver
As well as push, there is also unprecedented pull. Amazon Echo, Amazon recommendations, Netflix recommendations, Cortana, Siri, Google Assistant, Facebook bots, VIV and a range of other services, mean that the ecosystem is complete, and that demand will also now pull supply.
Conclusion
It is important to be neither optimistic nor pessimistic but realistic. Rather than flop into dystopian visions, based on movies and misconceptions, such a AI being one ‘thing’, just about ‘robots’, all about ‘mimicking the brain’, we need to look at progress that moves across a broad battlefront, some areas making rapid progress, some not, some may even in retreat as new weapons are brought to the front. What I'd like to see is AI applied to this predictive process - AI predicting its future trajectory and timescales. It’s a complex field but I can’t think of anything more fascinating or exhilarating.
Bibliography
Baum, S. D., Goertzel, B., & Goertzel, T. G. (2011). How long until human-level AI? Results from an expert assessment. Technological Forecasting & Social Change, 78(1), 185-195.
Bostrom, N. (2014). Superintelligence: Paths, dangers, strategies. Oxford: Oxford University Press.
Kurzweil, R. (2005). The singularity is near: When humans transcend biology. London: Viking.
Michie, D. (1973). Machines and the theory of intelligence. Nature, 241(23.02.1973), 507-512.
Muller and Bostrum (2014). Future Progress in Artificial Intelligence: A Survey of Expert Opinion. http://www.nickbostrom.com/papers/survey.pdf