ResearchEd - 1000 teachers turn up on a Saturday for grassroots event.... 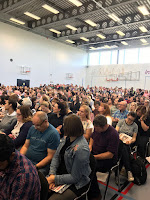 Way back I wrote a piece on awful INSET days and how inadequate they were on CPD, often promulgating half-baked myths and fads. Organisations don’t, these days, throw their customers out of the door for an entire day of training. The cost/load on parents in terms of childcare is significant. Kids lose about a week of schooling a year. There is no convincing research evidence that INSET days have any beneficial effects. Many are hotchpotches of non-empirical training. Many (not all) are ill-planned, dull and irrelevant. So here’s an alternative.

ResearchED is a welcome antidote. A thousand teachers rock up to spend their Saturday, with 100 speakers (none of whom are paid), to a school in the East End of London, to share their knowledge and experiences. What’s not to like? This is as grassroots as it gets. No gun to the head by the head, just folk who want to be there – most as keen as mustard. They get detailed talks and discussions on a massive range of topics but above all it tries to build on an evidence-based approach to teaching and learning.
Judging from some on Twitter, conspiracy theories abound that Tom Bennett, its founder, is a bounder, in the pocket of…. well someone or another. Truth is that this event is run on a shoestring, and there’s no strings attached to what minimal sponsorship there is to host the event. It’s refreshingly free from the usual forced feel of quango-led events or large conferences or festivals of education. Set in a school, with pupils as volunteers, even a band playing soul numbers, it felt real. And Tom walks the floor – I’m sure, in the end, he talked to every single person that day. 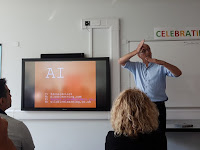 Tom invited me to speak about AI and technology, hardly a ‘trad’ topic. I did, to a full house, with standing room only. Why? Education may be a slow learner but young teachers are keen to learn about research, examples and what’s new. Pedro de Bruykere was there from Belgium to give an opposing view, with some solid research on the use of technology in education. It was all good. Nobody got precious.

But most of the sessions were on nuts and bolts issues, such as behaviour, teaching practice and assessment. For example, Daisy Christodoulou gave a brilliant and detailed talk on assessment, first demolishing four distorting factors but also gave practical advice to teachers on alternatives. I can’t believe that any teacher would walk out of that talk without reflecting deeply on their own attitudes towards assessment and practice.
What was interesting for me, was the lack of the usual ‘teachers always know best’ attitudes. You know, that defensive pose, that it’s all about practice and that theory and evidence don’t matter, which simply begs the question, what practice? People were there to learn, to see what’s new, not to be defensive.
Even more important was Tom’s exhortation at the end to share – I have already done two podcasts on the experience, got several emails and Twitter was twittering away like fury. He asked that people go back to school – talk, write, blog… whatever… so that’s what I’ve done here. Give it a go – you will rarely learn more in a single day – isn’t that what this is all about?