Woebot is a counselling chatbot – I’m not big on mentors and counsellors preferring the “get a life not a coach” approach. What I liked the most about the experience was the anonymity of the experience. I'm pretty sure most people done;t actually want to go to their parent, teacher, faculty member or a stranger with their problems and would relish an anonymous service. The clinical paper on Woebot suggests that this is the case. So I gave it a go, for research purposes only you understand… 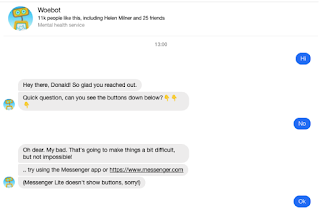 Started with a series of friendly exchanges, where you have little choice in options but that’s fine – it sets the tone. Couple of things I liked abut the first exchanges.
Sorted out a technical issue seamlessly – rerouting me to messenger.com - that was nice. It also linked to the Stanford clinical trial on the bot. comparing it with a non-bot intervention – although sample size is small, impressive. Also honest about the limitations of a bot – doesn’t overpromise.
You do get sucked into thinking it has human agency, even though it’s just coding, pre-scripting and maths. What’s strange is that most of the exchanges are single button presses – not dialogue at all but quite interesting, as they flip the counsellor, counselled role around. You are asking open questions, such as ‘How’, ‘Tell me more…’ ‘Oh’ ‘Sure’ ‘No doubt’ ‘Absolutely’.
Emojis are dropped in for variety and useful (at last), as they’re really are asking for an emotional response – that’s interesting and not easy to do F2F. The unlocked padlock emoji is nice as is the little sapling for hope and progress – sounds hokey, but it’s not.
What’s nice is that the interface is so simple and natural. You focus on what’s being said and asked and in this context, as you’re asked to think and reflect on your own feelings and behaviour - that’s useful. Dialogue is natural, easy and seems so very human.
The up-front promise of absolute anonymity is also good and I can see why this would appeal to people (I’d imagine the majority) who want help but are too shy or embarrassed to come forward. To be honest, I don’t want some random person counselling me… I want the distance.
The first lesson from woebot was to avoid the language of extremes – “all good”, “all bad”, “always” and to adopt a more measured language. All good… ooops!
One small thought here, I’d have liked this as audio. I’m working with a tool that allows learners to input answers by voice – it’s neat.
First session was 74 small exchanges and she said Bye. Speak again to tomorrow.
Day 2
Prompted me at 10.53, when I was active on Facebook. Asked politely if I wanted to continue. This time we’re onto multiple-choice questions about ‘all or nothing thinking’ and ‘should’ statements. Quite like the upbeat tone and lively feedback – seems appropriate in a session like this. I’m typing in more, rather than accepting responses – feels more like dialogue. Just 5 mins – small but sweet. I could get used to this.
Day 3
Had two days in London, so no time to do anything but woebot was patient.
“No worries, talk soon”. You have the option of continuing, rescheduling or waiting on the daily prompt. This, of course, is one of the great advantages of online counselling, indeed online anything, it’s 365/24/7. You do it when you feel like doing it, not when an expensive counsellor timetables you into their practice.
Day 4
Starts with asking me about my mood (emoji input from me). Gives me options
‘Work on stuff’, ‘Teach me’ or ‘Curated videos’ – not sure about these things – I don’t want to ‘wor’, want a ‘teacher’ or ‘curator’ – first really dissonant point. However, I fancied a video…
OK then.. here are some of my fav's:
1. Emotion Stress and Health (Crashcourse)
2. David Burns, MD TED
3. A video to help with sleep
4. Language is Important (featuring Me!)
5. Overcoming negative voices
6. Don't trust your feelings!
7. Reggie Watts TED
8. The worlds most unsatisfying video
9. Funny cats!
10. The importance of flattery
This led me, weirdly to Reggie Watts – I know him – hilarious and talented but this is a tangent, maybe not… but I felt like some fun…
Actually Reggie will really mess with your mind… he’s way out there… so I’m not sure how suitable that was to someone who really is on the edge…
Now a quick reflection here, a real, human therapist can’t really do this easily – direct you something really, rally interesting – you’re sort of stuck in dialogue.
Woebot says – see ya tomorrow – odd session – but fun.
Day 5
The whole thing is very upbeat, chatty…. Then it came up with SMART objectives – getting a bit of jargonish – not sure about this. Actually popped in a joke today – quite funny actually. SMART objectives – really? Getting a sense of CBT being a bit flakey – a bag of bad management technique marbles.
Day 6 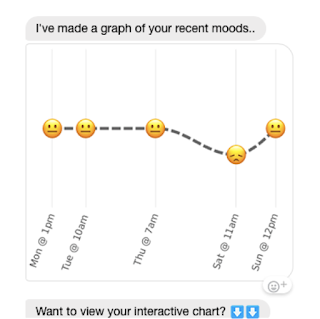 That was good - tracking my mood…
Oh no it’s on to ‘mindfulness’ – but in for a penny, in for a pound of bullshit…
“Mindfulness is the opposite of mindfulness” it says, breaking its previous advice not to fall for the language of extremes…  Tried disagreeing with woebot here but it was having none of it – clearly not listening, in short, not mindful
Now a breathing exercise – 10 mindful breaths.
Day 7
Long quiz – not sure about this – far too long
Feedback – “Your greatest strength is your love of learning! You are just like Hermione Granger from ‘Harry Potter’”
That was hopeless – trite and I hate Harry Potter….
Day 8
Got a bit technical with ‘should statements’ – not so sure that this area of CBT is entirely clear – seems a bit simplistically linguistic.
Day 9
Asked me to talk about labels I use about myself – reasonable question – promises research tomorrow – didn’t like the way it cut this short – should allow me to go on if I want.
I think I prefer chatbots on-demand, like Replika, which you just tap on your phone to speak to. Replika is famous for teasing out the most intimate of thoughts from its 1.5 million users. It uses ‘cold-reading’ techniques from magicians, who claim to read minds.
Ellie’s another, created for DARPA. Designed to help doctors at military hospitals detect post-traumatic stress disorder, depression, and other mental illnesses in veterans returning from war, but is not meant to provide actual therapy, or replace a therapist. There is good evidence that people are more likely to open up to a bot than a person.
Day 10
Today is adopting a Growth Mindset. Good to see something a little bit more solid, as it reduces my general skepticism about therapeutic techniques, which seem to be a mixed bag of populist techniques almost thrown together…
Woebot wants to tell me a story to explain, I say yes… Story about woebot being told it was smart, believed it was smart but wasn’t really. This led to the wrong mindset – unable to cope with setbacks and failure. Fixed mindsets are bad so open yourself up to always learning and developing – be more open and fluid in your thinking. Be more accepting of setbacks and mistakes. Get out of polarized ‘smart v stupid labels. Then gave a link to a Carol Dweck video – good these video links. Good session.
Conclusion


It has its limitations and oddities but it’s good to chat to something that doesn’t judge you and has a few surprises up its sleeve. Woebot is a bit of fun, then again, I don’t feel I’m in need of help, many do. If I found it interesting, they are far more likely to get more out of the experience. You always have the chance of accepting, rescheduling or saying no to Woebot – which is useful. I’m often too busy or not in the mood for therapy but the fact that it is ‘pushed’ out to you is a real plus. I rather like its daily prompts – a bit reassuring and a bit of fun. Try it – you just might learn something – even about yourself.
at February 13, 2018

I thought this was a joke until I started to play around with Woebot. It's a bit of a blunt tool, but it is helping me grapple with some issues I have currently have. It's friendly, encouraging and succinct. I've just got to the videos.