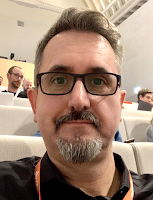 Martin Dougiamas is an Australian who gave the world Moodle, an open-source Learning Management System. His early education, through distance learning (every two weeks a plane-dropped materials and short-wave radio), from a school 1000 kilometres from his home in the desert, was formative. He found himself one year ahead of his peers in high school and learnt how to get the best out of ‘limited bandwidth’. The transition to doing education on the internet was a natural extension of this experience.

Seeing the gulf between the early internet experts and academics and administrators, he set out, in the early 90s, to use Web CT. Tired of the licence restrictions of the commercial LMS he was working with at Curtin University, he developed Moodle. The beta appeared in 2001, with 1.0 released in August 2002 and now has tens of thousands of implementations, with millions of teachers and learners.
Moodle stands for Modular Object-Oriented Dynamic Learning Environment and
Moodle.org is the community site, where developers and users discuss support and development. This had to be rationalised as the product developed. There are also many language implementations. Moodle is the most widely implemented LMS in the world, popular in Higher Education, as well as other educational institutions.
Open source is not a loose community of developers, it has a hierarchy, processes and central organisation and so Moodle has a team of core developers. This is paid for by Moodle partners, who pay royalties that come back to the trust. Partners provide services, often add-ons to Moodle, as well as hosting and other services, even content.
One of its strengths is the directory of shared plug-ins, extensions to the core product, which are available for free to the Moodle community. The Moodle Mobile App has also extended its functionality.

Dougiamas is more than a developer, he has a PhD in educational theory, on the use of open source software to support a social constructivist epistemology of teaching and learning. This has led to Moodle development that adheres to these constructivist principles.
Moodle’s course structures and features have emerged from his belief in some firm principles. He believes that everybody is both a potential teacher as well as learner, so forums allow the setup of different roles and permissions, and activity is shared with everyone, not be restricted to a simple teacher-student flow. The lines between teaching and learning are therefore blurred. The Moodle environment is also flexible and can be modified to suit different needs. There is also a focus on learning by doing, with the involvement of others, in terms of observable work.

Dougiamas has had to be tough at times, as this is a diffuse and diverse community. There have been problems with security, the interface and integration but this is not unusual in open-source projects that deliver usable tools with real user interfaces, as opposed to more back-end software.
He drives for consensus but describes himself as a ‘benevolent dictator’, as he has to make difficult decisions between different streams of development. He also successfully fought and won a patent battle with Blackboard in 2003, over what many saw as standard LMS functionality. Many admire him for this rear-guard, revoking action against what some see as an overly aggressive commercial vendor.

Some argue that this focus on social tools is at the expense of more relevant management, teacher and learner functionality, others that the ‘social constructivism’ angle is a myth, as most use it as a repository for fixed resources, used in practice, in didactic teaching. Like many open source products it can also suffer from poor user interface design, often described as clunky and even the use of ‘themes’ can’t hide the problems. Customisation has always been a problem. Although used in corporate and organisations contexts outside of education it lacks some of the functionality one finds in that type of LMS, although Totara, based on Moodle, an open source corporate LMS has had some success. Another problem is its poor reporting.

There are other open source Learning Management Systems, but Dougiamas has built the largest and most successful of these communities. He gave education an open source tool that is used on scale all around the world and really set the tone for this type of open source development in education. It has been a balancing act between core and non-core functionality, central and partner needs, as well as harnessing the effort of the many people who work and maintain the product but his influence is through direct development of a globally popular online learning tool. He can be seen as the heir to Vygotsky and the social constructivists presented earlier in that he brings social constructivism to the real world by instantiating it through open-source software. Whether that is a good thing or has been realised is another matter.