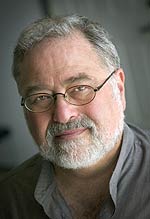 George Philip Lakoff is an American cognitive linguist and philosopher. He is a Professor of Cognitive Science and Linguistics at the University of California at Berkeley, where he has taught since 1972. Best known for his belief in the primary role of metaphor in language and thinking, he sees as the origins of much human belief and behavior in the physical and embodied mind. He has also published several books on political issues, including why people hold certain types of political beliefs, as well as the role of metaphor in political thought.

Lakoff believes that all forms of cognition and reason are grounded in emotions that are embodied. The brain takes its cues from the body, how we as bodies are situated physically in the world, how we act and move. This determines how and often what we think. Thinking is shaped and limited by this embodiment. Ideas are in that sense physical. You therefore really learn about something when you care about it. The emotional component, that is there because the mind is embodied, determines what you are attentive to.

Evidence for this comes from the relative absence of pure logical thinking and reason. When we think, it is much less clear and more complex, in terms of metaphor, often spatial and referenced to embodiment. Linguistically we often use figurative language, especially metaphor, and transfer this across to almost all subject domains in an attempt to understand, communicate and explain them. He also draws on evidence from neuroscience, motor and sensory functions.

Ideas are physical in the sense of taking place in our neural circuits. The classical view of reason as conscious and independent of emotion is wrong, as it is mostly unconscious. That unconscious activity shapes your thinking. Reason comes out of your physical and embodied experiences.

We think in frames and metaphors. Teachers and learners play roles, these are frames. As teachers and learners we also communicate, largely through language which is deeply metaphorical, with varying layers of metaphor. Stock markets rise and fall. Language is rooted in space, time and action metaphors. Metaphors are not in language but thought. Students can move ‘up’ a class. Note that we have used the word ‘move’ as motion and up as a direction. We feel these metaphors as embodied, directional acts. There is also the physiology of emotions. With anger your heartbeat and skin temperature goes up. Imagination, remembering and dreaming use the same part of the brain that sees that same action or movement taking place in the real world. We store acts as canonical actions, like hammering a nail or kicking a football, in the brain.

How does this relate to teaching and learning? Teaching is not the conveying of information, the idea that the teacher has ideas and uses language to convey or replicate those ideas in the minds of learners. It is a two way street, involving the exchange and imagining of sets of metaphors. This is important in teaching, as metaphors should then be used, carefully, to explain ideas to learners. Different types and levels of metaphorical and figurative language can be used to match the learners’ needs. Learners need metaphors to internalise. Learners can also use metaphor to assimilate ideas, explain them to themselves, generate ideas and help remember them.

He believes strongly in the importance of the arts in education and learning. Literature, music, poetry, crafts can all stimulate creative thinking. The arts nurture the ability to use and combine metaphors, improving understanding and memory. Creativity through visual and other sensory metaphors can be powerful tools in learning, using the imagination to create and therefore deeply process, understand and generate ideas.

Many regard Lakoff’s position on the role of metaphor as exaggerated, as it lacks the explanatory power to explain complex linguistic and cognitive phenomena. To use metaphors, some claim, one needs to have a grasp of the underlying reason, in other words they are illustrative and not fundamental. Many metaphors also seem to have been embedded in language by others, some may have been metaphors once but no longer, just known or memorised. There also seems to be slim evidence for ‘fixed’ frames. His cognitive relativism has been attacked by many, including Stephen Pinker as being unsubstantiated and inconsistent.

Neither is it clear that, even if metaphors are so ubiquitous, direct instruction could still use them fruitfully, even being understood and reused by the learner. It is also hard to see why art is so fundamentally and comonationally metaphorical or why it is always so prominently productive in learning. it may have no significant role in many other subjects.

Lakoff has probably had a more general and popular influence on the humanities than linguistics or psychology. It would be fair to say that his position is one of an outlier. Nevertheless, his work on the role of metaphor and the embodied mind has gained huge traction.

Lakoff, G. and Johnson, M., 2008. Metaphors we live by. University of Chicago press.

Lakoff, G. and Johnson, M., 1999. Philosophy in the flesh: The embodied mind and its challenge to western thought (Vol. 640). New York: Basic books.