Why schools are divisive 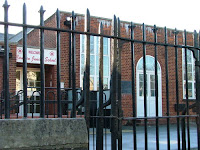 Educational policy makers love abstract concepts, especially if they’re alliterative , like ‘community cohesion’. Schools have been given a key role by the Government and OFSTED, we’re told, in ‘community cohesion’, yet another spurious concept and role to distract schools from the business of ‘learning’.

Any real community facet to a school is accidental. Kids are forced by law to go there, parents meet each other when they deliver and pick up their offspring at the start and end of the day (but at the schools gates-never going inside). In reality, schools are the very opposite of communal and could be described as divisive.

In practice ‘community cohesion’ means yet more over-written, vague policy documents. Of course, what they actually mean by community is the same old diversity agenda. The gathering of endless stats on racism, homophobic behaviour and so on. Community is being mistaken for disunity. Remember that over 60% of the parents and people in the community see school as the place they failed. Look to pubs, clubs, cafes, parks and other places for community, not schools.

Surely this varies from school to school and community to community?

The most obvious thing it does for the community (after educating children) is help kids to meet each other. Both our kids developed virtually all their early friends through school.

It is the source of many types of events such as organised sports, musical performances, plays, trips. Local parents are often involved helping organise these events and of course attending many of them.

It runs a play school which is largely run by local parents.

It offers its grounds for local events such as the annual fair.

The friends of the school which is run by local parents raises funds by organising community events.

It is one of four or five institutions which lie at the heart of the community.

I don't suppose all schools are like this. But surely the point is that many more could be?

Mark
Kids do, of course, meet at school but private and faith schools separate kids from the rest of the community and contribute to dividing young people.

School sports facilities are rarely available to the rest of the community and lie idle for much of the year, neither do they between themselves.

Parents don't largely see the school as the focus of the community. It's a place with walls and a gate - they're mostly excluded from its workings and facilities. The occasional school fete is small beer.

However, my overall point is that the 'community cohesion' agenda has little to do with the very good things you listed. It's skewed towards yet more diversity administration, when schools are already burdened with so much paperwork on these issues that 'learning' suffers.

Your comments add additional credence to a comment you made a couple of years ago regarding the fact that schools are NOT built or run for the benefit of the pupils.

The resources within these establishments sit idle for long periods of time, time that could be used to provide additional learning opportunities to our children.

Do you consider the vision of a fully inclusive school to be something that is achievable?

Paul
There are several things that could be done here:

More participation by parents in education