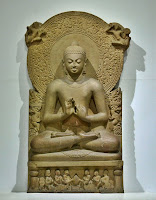 The Buddha is thought to have lived across the sixth and fifth centuries BC, although the exact dates are disputed. China contains half of all Buddhists. Outside of China are Thailand (13%), Japan (9%), Burma (Myanmar) (8%), Sri Lanka (3%), Vietnam (3%), Cambodia (3%), South Korea (2%), India (2%) and Malaysia (1%). Seven countries have Buddhist majorities: Cambodia, Thailand, Burma (Myanmar), Bhutan, Sri Lanka, Laos and Mongolia, where Buddhism plays a significant role in education through the monastic tradition and monastery schools.

Buddha as teacher
Teaching is one of the Buddha’s nine epithets as an ‘Awakened One’ but the texts show a man who is detached and hesitates to teach. There is no rush to action in his teaching of the road to enlightenment, as that would stimulate the very desires he wants to still. It should not surprise us, therefore, that the Buddha was disinclined to teach, as throughout his life, his method was largely by example. This also explains why he said so little about education and teaching. Buddhism is a practice, an inward looking practice that attempts to still the brain, not fill the mind with knowledge of the earthly word, the world of illusion, nor stimulate critical thought. However, there are parables and stories the Buddha tells that show his willingness to explain, such as the ‘Fields’ parable and use of the ‘Lotus’ as an analogous device. Bearing this in mind, one can see why Buddhism has not been a major force in educational thought but had been a force in religious, and therefore educational, practice.
What is taught
The Buddha, is seen as the route to understanding, living and ultimately enlightenment. The moral guidelines are clear with a focus on honesty, purity, truthfulness, kindness and sobriety.  Generosity and self-sacrifice are also strong traits. Above all, the sublimation of the self away from greed and selfishness characterizes Buddhist education. There is, therefore, a strong belief in cooperation not competition. This is in direct opposition to many western values of individualism and education as a preparation for an active life and for a competitive position in the job market.
In Buddhism, the mind is everything and peace and enlightenment come from within. This is not a filling of the mind with knowledge but a stilling of the mind. There is teaching of sacred texts but the Noble Eightfold Path requires one to live a life based on a right view, right thought, right speech, right conduct, right vocation, right effort, right attention and right concentration. This is far from the liberal arts tradition in the west or more recent pragmatic use of education in the East. It’s influence is more through cultural norms than its direct influence on education.
Monastic education
One significant cultural and methodological effect is the monastic tradition. The monastic tradition in Buddhism and submission to religious teachers and practices within monasteries is the mainstay of Buddhist education. To become a monk or nun is an alternative form of schooling in many in countries of South-East Asia. It was the mainstay in many countries before the modern era and still plays an important role as a supplement or alternative to state schooling.
Zen buddhism
Interestingly, the monastic tradition wasn’t taken up with relish in China, as it clashed with the Confucian idea of staying within the family, so Zen Buddhism, a more personalized form of enlightenment, linked to Daoism, emerged. Zen teacher-master exchanges are a pedagogic product of this particular tradition. ‘Koans’ are stories or dialogues that are used to illustrate or a method to practice Zen teaching. The teacher guides the student, through dialogue, to Zen enlightenment.
Mindfulness
The recent rise of Mindfulness in education is one example of Buddhist ideas influencing western workplaces and education, as the world becomes globalized, so ideas flow from one culture to another. This mix of Buddhist meditation, that took root in California in the 60s is alive and well in Silicon Valley today. It could best be described as a genuine religious practice, twisted somewhat for use for use by corporations.
Conclusion
With approaching half a billion Buddhists one would expect the Buddha and Buddhism to have had a significant effect on education but, apart from the Buddhist monastic tradition, there is little to suggest that it has had a significant effect on educational thought outside of religious teaching. It’s effect is primarily cultural, through moral norms.
at July 12, 2015