Augmented Reality is here with Microsoft’s Hololens. I’ve tried AR, but have doubts when I put these experiences up against VR. Sure they're different types of experiences but which one will become the more dominant consumer choice? Having braved wearing Google Glass in the street, which is AR of a sort, I’m not so sure that it has what it takes to conquer the world. Here’s why.
1. Dick effect
Glassholes, Bluetooth earpieces… we’ve seen this stuff come and go. We’re a vain species and don’t like tech that makes us look like fools. Now you look like a dick with a VR helmet on but you’re in there and it’s so all-encompassing that you don’t care. I’ve had people fall over on me, get up and carry on as if nothing had happened. You don’t see yourself as others see you. In this sense, VR & AR, for the moment, are limited to indoor, site specific uses.
2. Got to be better than existing devices
In all use cases, you have to ask, am I better off with just my mobile, tablet or laptop. I’m seeing precious few examples where I’d wear the Hololens. The publicity video shows a woman below her sink doing some plumbing, wearing the Hololens. Why not just use a tablet? Sure, you’re hands free, but if both work with gestures or voice recognition there’s no real added value.
3. VR overwhelms, AR underwhelms
With AR you feel as though the projected object is actually projected into your eye. It doesn’t have that all encompassing experience of VR ‘presence’. Hololens feels like a souped-up Google Glass. It’s not but it has that feel, commercially. VR is a more holistic experience and seems so rounded. VR overwhelms, AR is good but can underwhelm.
4. Mobile 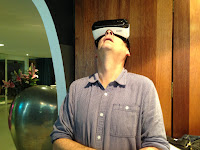 That’s me with the galaxy gear – mobile VR. VR has this link to mobile. AR doesn’t have that Google cardboard and Gear mobile application. In other words VR has several device routes to market, AR does not. You can pop a mobile into a cardboard or plastic mask and it works.
Gameplay
With VR you have this immediate application in games, where immersion is intrinsic to the experience, even enhances and creates new opportunities for new types of games, especially horror. AR doesn’t have that massive single market to make money and build upon amazing experiences. Sure you can have Minecraft on a table but that’s not enough.
5. Addressable market
Facebook (Oculus) has this 1.5 billion market to draw upon and their product is Facebook, a social tool, loved and used Microsoft’s product is an office tool. Ultimately, developers need to see a clear market and use that to spring the cash for applications. Both have that problem. But VR has the games market, simulations market and destinations market. It also has the movie and TV markets in its sights.
Conclusion


Who really knows? This all comes down to compellinging and innovative user experiences in the consumer market and practical and relevant experiences in other markets. These are two thrilling pieces of tech. Both will eventually succeed but my initial analysis suggests that VR will succeed quicker than AR.
at July 10, 2015