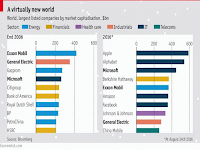 As the evidence builds, AI is seen as a serious threat to millions of jobs. My own view is that this has already happened. If we look at the top companies by market cap in 2006, then 2016, we see that the tech giants predominate. But they employ far fewer people, and at the same time, destroy jobs elsewhere. If they don’t destroy jobs, they almost certainly create underemployment. Some argue that the hollowing out of the middle-class has already taken place, via automation, hence the current political disillusionment and Trump.
Basic Minimum Wage
If, as most agree, the net result is far fewer jobs, or at least less time at work, we need to turn our attention to the political consequences. This is primarily a moral and political issue and the Basic Minimum Wage has been touted as the obvious answer. But I’m not convinced. The desire to get on in life and be productive seems like a too powerful a cultural force to give way to a supported life of leisure through taxation and pubic expenditure, even if it were possible. A more likely scenario is one where our needs for growth and development are also satisfied.
Basic Education Rights
What is more likely, is the need to educate and train people to do many different things in this new AI-infused, smart economy. This is hardly likely if the costs are at their present levels, and rising. This is not about the ever-expanding campus model. If we keep to the idea of education as being on campus, in institutions, always delivered by expensive ‘teachers’, then there will be an impasse. This quite simply cannot happen.
AI creates as it destroys 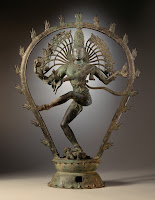 Shiva destroys as she creates, so it could be with AI. AI also needs to be applied to education to bring the same productivity efficiencies that it brings elsewhere. There is nothing unique about teaching and learning that make them immune from AI. Teaching is a means to an end – learning. If that can be done through AI, then we should grasp the opportunity. If we are facing a future where many people do not have a job or have more leisure time or need to be trained in newer skills, AI may then be a partial cure for the very ill it creates. If applied to education, teaching and learning, it may right the lifeboat before it gets a chance to overturn.
Forward to the past
It seems likely that we face a return to a human condition that last existed before the industrial revolution, when machines automated and stimulated the global economy, also before the agrarian revolution when machines destroyed work on the land. It is a return to an age when people did not work in factories or fields but prepared the land, sowed seeds, waited and harvested. Work was far more episodic in those times, with long periods, not of leisure, as a long winter with meagre food should not be romanticised. But there was certainly more time.
Scalable education through AI
In our technological age, when the communications technology we have both entertains and educates, it may also provide opportunities, on scale, to educate us for this new future. It could, just as it has in robotics, reduce the costs of education so much that we can all, including those in the developing world, benefit from its scalable dividend.
It is right to worry about the future, as recent events portent great dangers. Trump has shown that people are angry at losing the gainful employment and lives they once had. In supposedly prosperous Europe, the southern countries have massive adult and youth unemployment. Even in countries such as the UK and US, where there is relatively low unemployment rates, underemployment is a problem. Graduates, saddled with debt, are now struggling to find work that matches the supposed promise. And, of course, unemployment is rife in the developed world, leading to hugely disruptive migration. Climate change will almost certainly exacerbate all of this.
Create the future
But to react to technological change by taking a stand, as either a technophobe or technophile, rather than exploring and considering alternative possibilities would be a mistake. We can surely see the glass, not pessimistically as half empty, or optimistically as half full, but realistically as an opportunity to create a future that is centred around our real, human needs.
I’m not convinced that those needs were ever the drudgery of fields, factories or offices. If technology has freed us from using our bodies to do menial tasks, from the planting and harvesting of crops, to the repetitive tasks on a factory floor or in the drudgery of an office, so be it. Having freed our bodies from manual tasks, can we not also free our minds from repetitive and mind-numbing cognitive tasks? Aren’t there better things to do with our minds than adminisrate, process and manage?
Bodily, we may be better off, as we can keep ourselves fit and healthy (AI helps), even have superior help (through AI) in our old age. What we desperately need, I feel, is a rather old-fashioned view of human nature as being nurtured by learning. Where education is about autonomy, developing young minds to be curious and open, then seeing a lifelong learning as a possibility and not a clichéd conference phrase. Learning takes time, and rather than being rushed in bursts in schools, institutions or on corporate courses, we may be able to free learning from the tyranny of time, place and costs.