Is research-driven teaching in HE proven or doing more harm than good?

I spoke to a guy who had been taught by Nobel Prize winner Peter Higgs this week. He described how he was “incapable of teaching and scored the class at an average of 8/100”. Eric Mazur, who teaches physics at Harvard, described the Nobel Prize winning physicists he works with as being no better than dinner party commentators when it comes to teaching and education. The proposition that teaching in HE should always, even mostly, be delivered by researchers has always, in my view, been open to question.
1. Skills mismatch
A comparison of good researchers is unlikely to match that of good teachers. Research skills focus around the systematic thinking, attention to detail, understanding of methods and analysis. Teaching skills demand social skills, communication skills, the ability to hold an audience, keep to the right level, avoid cognitive overload, good pedagogic skills and the ability to deliver constructive feedback. My contention is that the personality types necessary for teaching are very different and, statistically, do not largely match those of researchers.
So where’s the evidence? The major research and text is Astin, who studied longitudinal data on 24,847 students at 309 different institutions and the correlation between faculty orientation towards research and student/teaching orientation. The two were strongly negatively correlated. The student orientation was also negatively related to compensation. He concludes that “there is a significant institutional price to be paid, in terms of student development, for a very strong faculty emphasis on research” and recommends stronger leadership to rebalance the incentives and time spent on teaching v research.
Note that this is not to say that some researchers are not good teachers, nor that some teachers are not good researchers, only that there may be a large statistical mismatch. Note, that this is also not to decry either researchers or teachers, simply to point out that there is neither correlation nor proven causation.
2. Student evidence
So let’s up the stakes. Do we have evidence for poor teaching, linked to the inexorable rise in the research agenda? In HE, hard evidence for the efficacy of teaching is hard to come by but one can go for hard data in lectures, easily the most common and dominant form of delivery worldwide in HE. 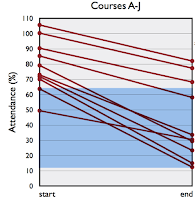 A recent study from Harvard, over ten courses, showed that only 60% of students on average even turned up. In any other area of human endeavour, when one has paid tens of thousands of dollars up front for high-quality teaching this came as a shock. Similar studies show similar results in other institutions. If we were serious about evaluating teaching in HE we would measure lecture attendance, most don’t, which is like a company not measuring its margins.
Another source of evidence in the UK, out this week, is evidence from students themselves. In the current survey of over 15,000 students from HEPI and HEA, all paying the maximum £9000 per year fees, the organisation responsible for accrediting academics who teach, a worrying 32% were disappointed by their teaching. 30% thought there was too little structure to their courses and 29% reported poor teaching. 29% reported too little interaction with academics and 29% too little feedback. This narrow range points to a pretty substantial and solid group of students who feel that teaching is poor.
3. Swing away from teaching
The argument that teaching should be driven and taught by researchers is not the result of any research into effective teaching or learning. It has been driven by external forces, namely the increased drive away from teaching towards research over many decades, in terms of funding, status and rewards,
Jenks and Riesman noted, nearly 50 years ago, the shift away from teaching to research in universities.  They reported on the rise of salaries and funding for research to the detriment of teaching and the real reduction in teaching time for researchers and an increase in the graduate to undergraduate ratios. In other words the shrinking effect on non-research oriented faculty. Massey & Zemsky report an academic ratchet towards non-teaching activity where teaching time was literally replaced by research and other professional activities. They called this ‘output creep’.
4. Research may damage teaching
I have no argument against research being injected into teaching in HE but not idiosyncratic research from existing or newly minted post-grads. Academic research, by its very nature, has a huge mother-load of unloved, not cited and unread 2nd and 3rd rate papers that should not be injected into undergraduate teaching. By all means bring research to the teaching experience but bring world-class research, not your dissertation or article. Don’t let quantity outshine quality in undergraduate teaching.
Universities are now geared towards producing the next generation of academics, namely researchers, not students who leave to enter the workforce. This is explicit in the researcher as teacher agenda, so undergraduates are taught scholarship, not the subject at hand. This is catastrophic in some subjects, for example, mathematics, where the research is largely unintelligible to undergraduates at that stage of their development. Put aside the fact that maths profs are famously poor teachers with their backs to the class and long sessions of chalk work.
5. Incentives not there
To be fair, academics are now largely judged on research not teaching. Too much effort in teaching can hamper your career. It rarely enhances your prospects.
The dramatic swing away from teaching towards research was tracked by Boyer who identified year on year abandonment of teaching commitment towards research. In the UK we had the massive expansion of research when Polytechnics were turned into Universities and now every institution wants to ape the top research universities, a ripe ground for the thriving ‘publishing’ virus.
6. Researchers want to do research not teach
Good researchers therefore often don’t like or don’t want to teach. This is far from being universal but common enough to be worrying. This expresses itself as often poor lectures/teaching and a disdain for acquiring teaching skills. Derek Bok, ex-President of Harvard noted the naïve attitudes of faculty towards teaching, believing that you don’t needs to be taught any skills to teach. A tendency towards blaming students, more recently for lacking the ability to concentrate, has long been a substitute for honest reflection on the quality of teaching.
7. Neither necessary or sufficient
Being a researcher is neither a necessary, and certainly not a sufficient, reason for being a teacher. We need to recognise and reward teaching as a skill in itself and be more active in taking poor teaching researchers out of lecture theatres and other teaching duties. We all know that people who should NOT teach are allowed to go on doing real damage in institutions. This should surely mirror the process of not allowing poor researchers to continue researching.
Conclusion
This is not a plea for abandoning the role of research and researchers in teaching. I also acept that it would be difficult to find the right level of subject matter expertise to teach at post-graduate level. However, the vast majority of students and courses are at undergraduate level. It is a plea for a more realistic blend, where research is not seen as a necessary condition for and inviolable link to teaching. It's time for the separation of the two, structurally and in terms of incentives. I'd add that this is precisely what technology does.
Bibliography
Astin, A. W. (1993). What matters in college?: Four critical years revisited. San Francisco: Jossey-Bass.
Harvard Study (2014) http://hilt.harvard.edu/files/hilt/files/attendancestudy.pdf
HEPI survey (2015) http://www.hepi.ac.uk/2015/06/04/2015-academic-experience-survey-2/
Jencks, C., & Riesman, D. (1968). The academic revolution. Garden City, N.Y: Doubleday.
Massy, W. F., Zemsky, R., & State Higher Education Executive Officers (U.S.). (1990). The Dynamics of academic productivity: A seminar. Denver, Colo: State Higher Education Executive Officers.
Bok, D. C. (2006). Our underachieving colleges: A candid look at how much students learn and why they should be learning more. Princeton, N.J: Princeton University Press.

I have some sympathy with your arguments. But surely it depends on what level you are teaching at. For 3rd year and postgraduate teaching, at least in my area, it can be hard to find enough teaching-only people who have enough grasp of the subject (especially the more mathematical parts) to be able to teach at that level.
This was part of my reasons for proposing a two-stage university system: first an ordinary degree at a place that specialised in teaching. And then, for those who wanted it, an honours/postgrad course at a research-intensive place, see http://www.dcscience.net/2015/02/01/what-to-do-about-research-assessment-the-ref-a-proposal-for-two-stage-university-education/

I agree with your point about post-grads but statistically,this is a relatively small cohort. My arguments are aimed at the great bulk of teaching to undergraduates, where appropriate levels of subject matter expertise are required. Note that this is not the same thing as research expertise. the evidence would suggest that those with a strong research agenda do not make the best teachers, as it instills a different setb of motivations and a disregard for teaching skills. There are structural implications here, which I know you agree with - two-stage system.