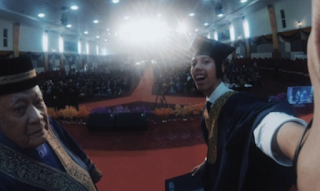 This selfie and story have gone viral in Malaysia. It’s the perfect image of the gulf between the old and the young, or more accurately the old and the new – the grumpy, old academic, bamboozled by what’s happening and the excited young student, ready to celebrate his achievement. 21-year-old photography student, Muhammed Radzi, took the selfie at his graduation but has been suspended by the University for being disrespectful. The lad was confused, "I thought what was the harm in recording this moment after working hard for two years in getting my diploma…
I really did not know that it was not allowed, and no one told me." He in no way meant it to be disrespectful. In fact he thought, as a photography student, that it was appropriate, a sort of celebration of his achievement. "I thought it would be appropriate for a photography student like me to make a symbolic gesture in taking a selfie”. Interesting
Clash of age and culture
For the elderly academic, photography is all about posed images for weddings, official functions, officials, group graduation pictures and brochures. He has no idea that photography has now largely migrated to the capture of real life events and online delivery. But there’s something deeper at work here. Malaysia has a mixture of Confucian and Islamic cultures, both of which have deeply-embedded principles of deference, for age and authority. Confucius and Mohammed both had an enormous and still massively influential influence on education. There’s bigger issues at stake here.
Internet – child of Enlightenment
The internet was born in the west, in an open, post-Enlightenment culture, where freedom of speech and critical thought are admired and seen as fundamental to academe. Don’t assume that this is true elsewhere. Similarly in education. Many countries have adopted the robes, mortar boards, degrees and structures of the European University; they have not adopted its principles.
1. Not a liberal-arts agenda
Many countries in the Far East, Middle East and Africa, have NOT adopted the liberal-arts agenda and why should they? They are happy to adopt the trappings of academia but not what they see as the principles of free thought, open debate and critical thinking. Their main purpose is personal and societal economic progress; not personal intellectual development. We assume that our enlightenment values should be adopted globally. This has not happened.
2. Knowledge transmission
Knowledge is seen in many institutions as a commodity to be passed down from academics to students. In Confucian cultures, despite the fact that there’s a great deal of pedagogic sophistication in Confucian texts, the master-pupil transmission, or what Freire called the ‘banking’ model of teaching and learning is still the norm. The model in the Middle East is often a literal process of rote learning, memorisation and recitation, that mirrors that of religious learning (Koran literally means recitation.) This is changing but slowly.
http://donaldclarkplanb.blogspot.co.uk/search?q=Confucius
http://donaldclarkplanb.blogspot.co.uk/search?q=Mohammed

3. Critical thought is not the point
Few who teach, either there or here in the west, dispute the fact that it is difficult to get many students engaged in asking questions, critical debate and a culture of free expression. I myself have experienced this in work I did for the World Bank online into China and lecturing to students in Malaysia, where the only questions came from foreign, Western students. Their mindset is different and they’re there to get the job done. I’m not saying this is bad but it is different.
4. Culture of deference for age
This is a noted principle, not only in Confucian and Islamic cultures but in many other cultural contexts. We are far less submissive in the west and see the young as not only having a voice but our duty being to encourage them to develop that voice. The rise of teenage culture in the West was not mimicked in every other corner of the globe.
5. Culture of deference for authority
Deference for political, religious and institutional authority is still a potent force in many countries. We may see our University years as being one of free thought, reflection, even rebelliousness. That is not always tolerated elsewhere. In fact, students may be seen as submitting to the regime of the institution, be diligent, study hard and question little.
6. Business of education
Witness the fact that few students from the east come to the UK to do courses beyond the utilitarian; business, IT, engineering and medicine etc. This is about status back home and making money, not critical thought. Of course, the Universities in the west are glad to keep this hidden under the mortar-board, as they need this revenue for survival. Many are now dependent on this income stream. When it comes to the crunch this side of Higher Education is in the ‘business’ of education. It’s a shady world of marketing, agents and less than rigorous admissions.
Them and Us?
Far from being a ‘them’ and ‘Us’ issue, it has become an exchange. Students today are much more global in outlook. Many have taken the trappings of our system but not the culture or entire curriculum. We are increasingly copying their more ractical, utilitarian view of Higher Education. Funding has been increasing in STEM subjects at the expense of the Liberal-Arts agenda, driven by a political perception that we’re in catch-up mode with eastern economies (and PIDA). Far from copying Finland, we’re more likely to be following Shanghai. This may be seen as heresy but why should they copy a system that is going through crises in costs and relevance?
Conclusion


Both systems are imbalanced and both have a lot to learn from each other. There is an assumption in Academia, of a homogenous worldwide network of Universities, that have all adopted the liberal views of western academe. This was never true in most parts of the world, outside of Europe and the US. They’re milking us for our structures, processes and expertise but have no intention of necessarily copying our values. Nevertheless, what the selfie story shows is that this Culture War still has a long way to go. The next generation use, communicate, contribute, collaborate and live a good deal of their lives in that other vast global territory – the internet. They may well have their say. On the other hand that ‘say’ may be the rejection of the Enlightenment model. The digital genie is out of the bottle but the jury is also still out……
at June 10, 2015