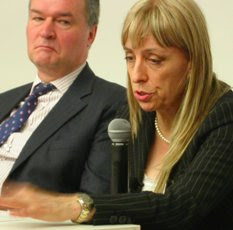 Despite the complete lack of scientific evidence for learning styles it seems to have gathered force through recent efforts on 'personalised' learning. This is suicidal. The whole education and training world continues to present itself as half-baked and gullible on theory.

I presented the Coffield research on learning styles at a coaching conference recently and received an abusive email from Peter Honey (who was in the audience). After an exchange of emails on the scientific evidence on learning styles he went strangely silent. He did admit, however, that there was no scientific evidence to back up his theory - the famous Honey and Mumford model.

Here's another serious, qualified and sensible voice in the telegraph attacking their use in schools and training.
at August 12, 2007 1 comment: