Trump tragedy has its roots in The Apprentice and Leadership BS 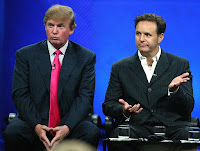 
I dearly hope that he doesn’t win on 8th November but I fear he will. I will be there, in Washington, and will take no pleasure in either of them winning. Why? One is a dangerous demagogue, the other is a dynastic democrat – neither are there on merit nor suitable for the challenges ahead.
at October 16, 2016 No comments:

Response to Stephen Downes on 'diversity'

I've put Stephen Downes commentary here, along with my responses. Some good challenges but it gets very, very odd right at the end...
S
Donald Clark appears to be settling into the role of the voice of the closed society. His latest foray into this is his recent column arguing that diversity is "wrong-headed". Leaving aside the question of which monoculture we would settle upon were we to do away with diversity (I'm thinking Hopi, maybe, or perhaps Maori) his argument is based on a short-sighted and narrow interpretation of what diversity means.
D
You’re making a lot of ‘wrong-headed’ assumptions here Stephen. I am a libertarian and this critique is from the left, as is Adamson’s. I just don’t think that the 'diversity' movement, as it manifests itself in policies and training helps. I get the idea that a diversity of views on diversity is not to your liking? I don't regard myself as part of a monoculture. I'm with Mill on this, a plurality of views and feredom of expression. Neither do I see this critique as 'short-sighted' or 'narrow'. It's a considered piece with some practical suggestions at the end. In any case, I'd rather engage in the debate than get all personal and accusatory....
S
Clark's point of departure is Goran Adamson’s TheTrojan Horse. It is naturally not available as open content, so we have to rely on additoonal sources to look at the argument. An earlier report of his, Immigrants and Political Participation, he argues "successful assimilation of immigrants mainly is achieved by downplaying the exotic implication of group-based difference." (p.40)
D
“naturally not available as open content” Why the dig? He’s an academic who has published a book. I use a ‘diverse’ set of sources Stephen. Ever thought of buying the book? It’s rather good and in my opinion the best I've read - well researched and well argued.
S
Terri Murray summarizes, "multicultural ideology makes a fetish, like the racial theories of yore, of ethnic diversity... the multicultural view of immigrants doesn’t treat them as individuals who have a basic human need for self-determination; rather, 'the immigrant' is an abstract type, a species, a race." Worse, writes Murray, "When it comes to ethnic groups themselves, the rights of dissenting minorities within these groups are rarely defended. That’s because the multicultural agenda treats ethnic subcultures as homogeneous groups."
D
Adamson does indeed argue this case, like Scruton and many others. So do I. To widen the net somewhat Peter Wood's - The Invention of a Concept, Rumy Hasabn's Multiculturalism and Yehudi O Webster's Against the Multicultural Agenda are also worth considering, as there are many more arguments than this  'fetish' argument.

Clark takes this one step further, addressing diversity training. He writes, "Major studies from Dobbin, Kalev and Kochan show that diversity training does not increase productivity and may, in fact, produce a backlash. Most don’t know if it works as evaluations are as rare as unicorns"

Clark makes his case in ten points, and we'll address them in turn. The headings are Clark's, not mine.

1. Ideology of Diversity
The case in both Adamson and Clark is that the choice is being force upon us between individual freedom and the rights of a culture to assert itself. We'll revisit this theme many times. But to begin, the argument in favour of diversity is itself being presented as an ideology, against which no dissent is allowed.

Let's stop right there for a moment. The concept of 'meritocracy' is deeply flawed and almost universally misapplied (this is the other part of the argument from the previous section). There are numerous arguments against the concept: it presupposes we can measure merit, it presupposes that merit reflects a person's worth, and it presupposes merit reflects an individual rather than their social of cultural background.
D
You may think that ‘meritocracy’ is flawed. I do not. Neither do I think it is the only measure of a person. You box the concept in to make your case. I believe in meritocratic recruitment - see my practical ideas at the end of the blog, that strip out gender and cultural indicators. That, in the end, I think will produce equality of opportuntity and a more 'diverse' workplace, not diversity training.
S
Moreover, meritocracy is morally wrong. As David Freedman writes, "Smart people should feel entitled to make the most of their gift. But they should not be permitted to reshape society so as to instate giftedness as a universal yardstick of human worth." Moreover, it is the gifts one has received in life that contribute to whatever qualities we call 'merit' - and luck does not convey any sort of moral primacy or quality of judgement. One only needs to observe the behaviour of the wealthy and gifted of British society to see that.
D
I find your definition of meritocracy as 'giftedness' astonishing. This is an absolute jumble of assumptions and an argument that defines meritocracy as some sort of genetic gift. I do not hold and have rarely heard this view. The idea that the wealthy and gifted of British Society believe in meritocracy is, of course, laughable.
S
Where Clark is correct is that diversity brings with it difficult choices. As he observes, "From a feminist point of view, diversity may tolerate attitudes, cultural norms and behaviours that may prevent gender equality." Quite so. Nobody is automatically right in a diverse society. Every form of difference needs to, and has the right to, make a case. Ultimately it's about choice and deciding for oneself.
He also writes, " It prevents us from taking a secular view of the world, as we give in to relativism and acceptance." This is not true.I take a secular view of the world, as everyone knows. I also encourage those who wish to pursue a religious view of the world to do so. What 'diversity' means is that they can't force me to be religious, and I can't force them to be secular. Indeed, it's even a matter of bad taste to even try.
D
Re – secular. The diversity agenda drove the creation of faith schools in the UK - started by Blair and continued by the right to this day. In concrete cases such as religious schools (we have them in the UK) and religious instruction in schools (compulsory in the UK), the secular is under attack. I’m not forcing anyone to be secular, one should be free to believe in Gods if you wish (I'm a libertarian remember), but I do believe in secular education, as in that case I want the opening up of young minds, rather than closing them down with single belief systems. I’d much rather teach the diversity of philosophy.
S
"The group trumps the individual," he writes. "It pits the poor against the poor. Ultimately, it is the dull traditionalism of conservatism." It does so only if we view these as struggles in which one or another type of diversity must ultimately prevail. But this is unreasonable. Nobody thinks that it is 'diversity' to hold that Sharia law ought to apply in all cases.
D


Complex one this. I do, however, think that one ideology of diversity has prevailed, the group over individual definition and the argument based on productivity. On your last point, this agenda has led to the appointment of Sharia judges in the UK, something I strongly disagree with.
S
The people who oppose diversity are the ones pitting one group of people against another; they are, indeed, the ones who are representing them as groups in the first place.
7. Diversity does not lead to increased productivity
This was the major point raised by Adamson and others, and yet it begs the question: who said the objective of diversity was to increase productivity in the first place?
D


A 'sham'! What an arrogant ending. For a man who supports 'diversity of thought' this suddenly gets all too personal. You’re better than this Stephen. Always had a lot of respect for you but I really do think you’ve fallen into replacing ‘diversity of thought’ with arrogance and insults. "not worthy of the little effort it took to write" that's a shameful expression of arrogance that flies in the face of everything you've said above about diversity of thought.
at October 10, 2016 1 comment:

Higher Education is exacerbating, not fixing problems, in teaching - much of it can be automated