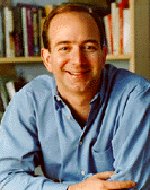 What do the founders of Google (both of them), Amazon and Wikipedia have in common? Like Alexander Graham Bell, Thomas Edison, Henry Ford, Mahatma Gandhi, Sigmund Freud, Buckminster Fuller, Leo Tolstoy, Bertrand Russell, Jean Piaget and Hilary and Bill Clinton before them, they all had early Montessori schooling.

Sergei Brin and Larry Page both attended Montessori schools. Indeed, they both credit their Montessori education for much of their success. It was the Montessori experience, they claim, that made them self-directed, allowing them to think for themselves and pursue their real interests.

Jeff Bezos's mother tells of his single-mindedness at his Motessori school, being so absorbed in the tasks he chose that they had to drag him off to give him a change. This same self-directed, single-mindedness was a feature of his Amazon adventure.

Jimmy Wales was educated in a one-room schoolhouse. Although not home-schooling, it was close as he was taught in a class of four by his mother and grandmother, who ran the school. The school was significantly influenced by Montessori methods and he had the freedom to study what he liked on his own terms.

Note that all three have made significant contributions to increasing access to self-directed knowledge and learning.
at March 12, 2006 8 comments:

Web 2.0 is getting closer as Google buys a web word processor. They seem to be gearing up to offer a rival web Office suite, with full data storage online. Could this really rock Microsoft who only seem to offer more features at greater cost.

All this Web 2.0 stuff will also affecting learning. With blogs, wikis and loads of other Web 2.0 productivity tools, knowledge is being created by users, edited by users and shared by users. This brings real bottom-up knowledge into workflow. The prognosis for training - get into this now or lose the battle to have a meaningful say in the management of knowledge in your organisation. This stuff is user-centric therefore learner-centric. It's also cheap and easy to use.
at March 12, 2006 No comments:

Love this Wikinews story. A survey by SonicWALL, a Sunnyvale, CA, based company, reports that 10% of worldwide telecommuters are nude while working, finding 12% for men and 7% for women, respectively. A gender gap also exists for showering on work-at-home days, with 44% of women showering, while only 30% of men did. The survey also found that 39% of both sexes wear sweats while working from home. The survey also covered less racy topics, including opinions on productivity. 76% felt that working at home increased productivity. The number of telecommuters has increased sharply in recent years. For example, 43% of U.S. government employees telecommute, at least part of the time; up from only 19% one year ago. Posted while naked!
at March 09, 2006 5 comments:

The growth of 'grey gamers', backed up with with recent neuroscience research, has led Nintendo to release 'brain training' games for the elderly. It's a package of workouts designed to reduce your brain age. This is big business with a heft £2 million advertising campaign in the likes of Saga magazine . The research comes from Ryuta Kawashima, a professor of neuroscience at Tohoku University. It'll be in the UK in June.

And here's another.....The Fischer Family Trust has produced a report on the exam results of 105,163 Year 11, a total of one in six students who took their GCSEs. Over 105,600 year 11 students from 1006 secondary schools were analysed in an independent report which proves that using e-learning to prepare for GCSE exams really does improve grades. The report takes into account the results of one in six students who took their GCSEs and found that pupils who used e-learning for as little as 10 hours achieved 4.7 per cent more 5+ A* to C GCSE grades than expected, based on prior attainment. The value added gain was 2.1 capped points per pupil, which is the equivalent of one-quarter of a GCSE grade per subject. Improvement, in terms of overall GCSE points score, is greatest for students in middle and lower prior-attainment groups. In terms of attainment of 5+ A* to C GCSE passes, improvement is greatest for middle prior-attainment groups, particularly where levels of use are above 10 hours. For pupils in the lowest prior attainment band, using e-learning for 10 hours or more achieved gains of nearly half a grade. This is the equivalent of 50 per cent of students achieving one grade higher than expected.
http://www.fischertrust.org/ict_main.htm
at March 06, 2006 1 comment:

People are always crying out for proof of the learning efficacy of e-learning. Here's one from secondary education. A series of Independent Reports from different countries all reach the same conclusions. The graph shows the link between SCHOLAR and attainment. Those with no or low use of SCHOLAR achieved the same or a lower grade at A2 compared to AS level. High users of SCHOLAR achieved the same or a higher grade.
There have now been three SCHOLAR pilot programmes in the UK, one in Scotland, one in England, and one in Northern Ireland. All three have been evaluated independently using different approaches, yet all three have identified the benefits of this approach. The improvement in exam results between AS and A2 level is particularly significant. Analysis revealed that there was a positive correlation between the number of SCHOLAR pages accessed by a student and the difference between their AS and A2 grade. The more pages of SCHOLAR accessed by a student, the more likely they were to improve a grade between AS and A2.
http://www.interactiveuniversity.net/programmes/scholarengland/evaluation.aspx
at March 06, 2006 No comments: