I had no idea. In fact I had the wrong idea. I never ‘got’ it. Why would anyone want a dog? Then I got one… and ‘got’ it. It’s been one of the deepest and significant learning experiences of my entire life.

First up is the emotion. Now I’m a bit of an old Calvinist, Scottish to boot, and as PJ Wodehouse said “It is never difficult to distinguish between with a Scotsman with a grievance and a ray of sunshine.” But from first grasp, holding that tiny thing, as it looked into my eyes, I was, as they say… smitten. It only got worse. I became besotted.

People, who have known me forever, will tell you that it made me calmer. It also, and I say this with no evidence whatsoever, made me more empathetic. You have to work with a dog. It doesn’t speak, so you need to get into its mind a little – which is clearly a mind that is free from most human concerns. Doug knows nothing of good or evil, heaven or hell. Socrates said that "the unexamined life is not worth living”. I look at Doug, and think, “the over-examined life ain’t all it’s cracked-up to be either”. I honestly think a dog can make you a better person.
Of course, you start out with high hopes – that your dog is so smart that it may just squeeze out a GCSE or two… then you realise that it is, well just let’s say cognitively capped. This had a sort of philosophical effect on me as I became more aware that we humans are most likely in the same predicament. You learn humility.

Yes, there’s the exercise, getting out more, nice walks and meeting people. I met a big, hairy-arsed builder who told me that when he comes back after a hard day’s graft, his teenage kids ignore him, his wife nods and seems tired of him, but when that first crack of the door opens, his dog greets him as if he had just won the dog lottery – every damn day. There’s the lovely Ethiopian guy, who recued his Huskie from China. Apparently there’s a growing middle-class who buy expensive breeds but can’t handle them in their little apartments, and dump them on the outskirts of the cities. There’s the teenagers who are happy to talk about school and sometimes… their hopes. 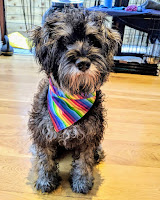 Then there’s the dog talk – tons of it and I can tell you I love it. I’m becoming quite the dog-man. My grandfather had a Jack Russell and was called Jack Russell – both, I hear, were characters. He was a stand-up comedian back in the day and used the dog in his act. I’ve learnt that Corgis were bred to herd cattle – they snapped at their heels apparently.
Brings your family together. We gather around Doug, take him for walks together. Talk about him. Buy him stuff - loads of stuff. Actually it's not that he brings your family together he is your family.
Most of all there’s Doug. He’s there all the time, prancing around the house, sleeping, bringing his soft toy (replica of a rat) and wanting to play. But the greatest joy is when he comes and sits next to you or better with his head on you. It would melt an obsidian heart.
So there it is… I flipped. I learnt that you can change your mind on something – big time. What it takes is not reading about dogs, researching dogs, going on a course about dogs – it’s about getting a dog. They say you can’t teach an old dog new tricks but you bloody well can. Thanks Doug. You don’t know it but you sort of changed my life mate.