Spent a day listening into a wholly online training ‘learndirect’ service on basic numeracy and literacy where there is ZERO face to face interaction. You sign-on online, get a telephone call, do a diagnostic online, choose a course and get online and telephone tutor support. TESTMYPC checks their PC operating system, browser etc and the learners also get support from others where experiences are shared.

What struck me about the learners was how grateful they were for the service. They mostly want to get some basic qualifications to get a job and clearly had a bad time at school. This is their second chance and they’re motivated.

The tutors are excellent and know how to motivate and help with problems the learners experience. This is the way to go. Why get people to turn up to institutions at place distant from their home at specific times that may not suit them? In this service mothers with young children do their work at all hours. They like the fact that they’re not getting loads of face-to-face stuff. There’s even specialist tutors for those with problems such as dyslexia.

The only time they see a real person is when they have to turn up to an assessment centre to sit the exam, and it’s this that causes most fear. The assessment process is primitive and does more damage than good. Rather than accepting a more continuous form of assessment, it’s all down to this exam in a centre that can be up to 30 miles away. Curiously it’s this one face ton face experience that causes most problems.

University of the People 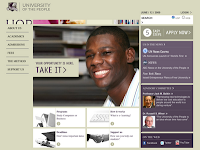 Power to the people.power to the people right on...... people of a certain age will know that tune. We’ve had the Open University and the School of Everything, (let’s ignore the UKeU and NHSU for a moment) but now we’ve got an idea that could be truly revolutionary, and global. The University of the People.

How much does it cost?

Nothing. That’s right – it’s free. It’s the world’s first TUITION FREE university with its first crop of students coming from 49 countries aged from 16-61.

Where is it based?

Nowhere and everywhere. It’s the internet baby, so it truly is the first global university.

When can one join?

Enrolment is on a rolling basis, with five terms and therefore five start days, avoiding the stupid traditional model of a ‘once per year’ start. They can do this by having a solid orientation programme on ‘Computer Skills for Online Learning’ as well as 'English Composition' (as all courses are currently in English). The first cohorts will be around 300 students.

Drift to the free

This is exactly what the web leads to in terms Chris Anderson and Kevin Kelly’s drift towards the free model. We saw it with knowledge. First it was holed up in elitist, expensive books, libraries and institutions, then published as ‘encyclopedias’ (Encyclopedia Britannica), then half-baked business models like Microsoft Encarta and eventually the free Wikipedia. The democratisation of education will follow the same road.

It still has all the hallmarks of a US driven initiative, with US holidays in the calendar and the usual stuff that US people think is global but is actually local. However, it has all the hallmarks of a successful initiative; vision, global reach, free and online. Someone’s going to crack this and it sure as hell ain’t going to be the Donald Trump University. Good luck to them – they deserve it.

eBook for every child 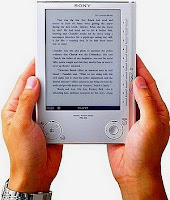 Nice little paper from the US on the benefits of eBooks in schools. It’s this simple, ideas approach that we need in the UK, not these tedious long-winded reports from quangoland. Real progress is being bogged down by tedious inclusion debates, obsessions with classroom fixtures like Whiteboards and a chronic case of talk, talk,talk and no action.

This well written paper focuses on one piece of technology, explores the benefits, has clear recommendations and sets you thinking.

Texts updatable, paper books are not

Huge numbers of classics can be available for free

Thanks to Andy Black for this link.

This is directly relevant to the current debate on CRB checks, which some regard as overkill and others as overdue. A total of 3,850,000 checks were made in 2008-09 and the total cost so far is an astonishing £600 million. It’s amazingly inefficient with people having to reapply every time they work with another public body.

On the other hand the system has supposedly stopped 98,000 people from working with children in the last five years. Supporters of the system point to the suffering prevented, rather than the cost. But, at well over £6000 per block, this is expensive. Then again, the deterrence effect will have prevented many more from trying. Interestingly the number of people actually convicted of crimes against children was 616 in 2002 and has risen to 1, 175 last year. A worrying statistic one could say, but as most of those charged were relatives or those known to the children and their families, the CRB checks would have been of little use.

So is this a huge piece of costly public bureaucracy or a valuable public service that really does protect children? My own view is that, despite the fears, the CRB service (ISA) has become bloated and is not looking at simpler and more cost-efficient ways of providing the service. It has become the biggest vetting service in the world, and is heading towards covering 1 in 4 adults living in England, NI and Wales. Bodies like this tend to evolve into having their own growth as an objective, rather than the public good and the costs of a search, through computer databases, seems excessive. It also puts people off volunteering. The tone of voluntary service is now one of guilty until proven innocent. It also increases the distrust children have in adults, normalising a dysfunctional view of adults. This can’t be right. Then there’s the problem of malicious accusations, sometimes used as a weapon by children and others against innocent adults. The ‘false memory’ scandals that have arisen out of the therapeutic industry have been scandalous. Another reason, and a clincher for me, is the support given to the agency by Esther Rantzen!

Someone comes along and says, “I’ll fund the publication of the largest respository of human knowledge ever, make it available, and searchable, online. On top of this we’ll put $125 million into an independent registry, so that other deals can be done. Authors, readers and publishers will all gain”. Sounds too good to be true. Well that’s exactly what Google are doing, albeit, with a meander through the courts in the US and Europe. They’ve already passed the 10 million book mark in over 100 languages (aiming for over 32 million), with authors and publishers receiving 70% of the revenues.

Google want to play global Bernardo’s to the ‘orphan’ works, that are locked up in difficult to reach libraries. They took the risk, invested the money, digitised the books, even when unsure of the legal outcomes. Compare this to Microsoft, one of the main critics of the project, who abandoned their scanning project Live Search Books in 2008. Why? Cost and legal worries.

Readers have most to gain, as libraries have proven, inadvertently, to be the enemies of knowledge and progress. The great libraries have locked away knowledge in inaccessible vaults, with over 90% of books, tens of millions of them, out of copyright and even when in copyright, out of print. What’s more, books are going out of print faster than in the past, due to the business practices of publishers. All of this leads to books being less, rather than more, available. The library system never got round to doing it for themselves, so why blame Google when they want to realise such a brilliant idea.

Authors also have lots to gain by having their books republished. Most of the books under the settlement are out of print, namely the majority of books that exist, books before Jan 5 2009, as books go out of print faster. Inter-library loans are expensive, slow down research and the researcher can’t really gauge its worth prior to ordering. Paper production is expensive, polluting and contributes to global warming and books disintegrate, are expensive to store and are non-searchable.

Encyclopedia Britannica was created by a private publisher in 1768 and has continued to be published by private companies for nearly 250 years. In fact, the vast majority of books have and continue to be published by private companies. Google’s effort is simply the market working efficiently to satisfy demand by moving beyond the physical storage and distribution of paper books. They stepped up to the electronic publishing plate with a bold initiative, in line with their stated business aim. There is now way that the public sector would or could have achieved this goal, as it would have been mired in ‘not invented here’ jealousies and weak management.

Guess who’s against? What a surprise; Microsoft, Amazon and Yahoo (all part of the oddly named Open Book Alliance), the Author’s union and some reactionary librarians, who would dearly love books to be imprisoned for all time in the vaults of their paper palaces. In any case. the deal is not exclusive as the Book Rights Registry will be free to do other deals with the existing 25,000 publishers and others. Even under this deal

While the fight between interested parties rumbles on, the main argument seems to be suppressed, that there is a huge social good at stake here. Access to knowledge which is, at present, inaccessible, is a good thing, especially for those with disabilities or distant from one of the few major libraries. Then there’s the debate around the searchability and suitability of what’s being called ‘The Last Library’, making it truly useful in advancing knowledge and research.