Thought I'd try the new stuff from the BBC as I have kids at the right age. Confused from the start. Menus that bounce up and down on the screen may look good but the designers need some serious help on interface design. Basic design errors abound. For example an icon with a tick on it is the confirm button, yet the meaning seems to be ‘you got it right’. You have to press exit twice from each section, one would have sufficed. There’s also too much loading time, this was disruptive with endless countdowns and waits. Some just didn’t load at all, with no explanation.

First episode is a few cartoons – linear and next to zero learning. The second is video broken down into phrases, but some edit points are in the middle of words! Identifying the parts of the car was fine, although the vocabulary (windscreen wipers, licence plate, gears etc) seems a little advanced for this age. In another you have to identify words as you hear them, but this is just identifying what’s said, divorced from the meaning of what’s said. In some interactive exercises when you get things wrong there’s no formative feedback to tell you why or what the right answer is. The ‘make your own comic’ is fine, but is an exercise in sorting sentences and takes too long to navigate and complete. The DJ game is simply to identify masculine, feminine and plural, this is OK, but the vocabulary is too complex at this stage.

Nothing changes, this was a problem with ‘A Vous la France’ (BBC), where a crew seems to have simply gone out to film, then someone had to build a language programme around what was shot. It was, in fact, impossible to learn French from that package.

The whole thing is VERY clunky and clumsy in navigation, style, interaction, vocabulary and learning. “I was fiddling around with it for ages and nothing happened. It was just a movie. It was crap. It’s confusing. I didn’t know what to do. I felt like it was, like, I should have been getting involved more as I was getting a bit bored. I thought it’d be better cause it’s BBC.” Carl (12 years old). Oh dear!
at January 31, 2006 37 comments: 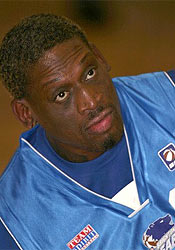 In local paper today (Brighton Argus) - I was interviewed at the Dennis Rodman (Big Brother) basketball game (season ticket holder at Brighton Bears). "It's a big bonus to see him here...I think Dennis is a Brighton kind of person with all his cross-dressing etc." I love basketball and one of the most exciting learning presentations I‘ve ever seen was at TechLearn 2002. Dave Hopla, a top US basketball coach, put 110 out of 111 shots through the hoop, astonishing, as he was also giving his talk to a couple of thousand people. He even shot backwards and over his head from 6 yards and still scored! 'What's this got to do with e-learning?' His message was pure - learning is about memory so practice matters. Ebbinghaus did the groundbreaking work and people like Roger Schank keep reminding us that the 'sheep-dip' experience is wildly unproductive, without follow-through and practice. This is why informal learning is so powerful, one learns through repeated practice.
at January 31, 2006 4 comments:

The Curious Incident of the Dog In the Nightime gave a unique insight into Asperger's Syndrome, related to autism, where people have problems in understanding other people’s thoughts and dealing with social interaction.

John Lester, from the neurology department at Massachusetts General Hospital in Boston has used MMOG Second Life as a learning tool for those with Aspergers. He bought an island, Brigadoon, essentially a world within a world, set up within Second Life. "I want to give people an environment where they can practice their socialisation skills and learn more about Asperger's, and help them help themselves," he said.

The residents create their atavars, kit out their homes and communicate with each other. Groups get together regularly and suggest meetings on the island. The many social misunderstandings, a feature of this condition, are then managed through reflection and discussion giving people informed support. It’s all about a virtual environment where people can safely learn from their peers, experiential learning without the harshness and consequences of making those mistakes in the real world.

The learning is a three stage process, first getting better at communicating with others on the island and making friends with people they’ve never met, then taking that experience to improve communications in the game at large, then in the real world. Many with Aspergers/Autism are already highly computer literate and active in online communities. They are also used to altering their physical world to cope with the real world, so this opportunity to build a virtual world and deal with others online makes sense.

If you have any doubts about how wonderful this idea is, read the following blog, largely with entries from people with Aspergers/Autism. Who said that games are socially isolating phenomena?

Just given talk at Learning Technologies on aforementioned subject. Gareth Jones from the BBC followed, with some excellent examples of blogs, wikis and Web 2.0 stuff, and showed that at least one major organisation in the UK is making the effort on this front.

Thought - Why spend all our budgets on formal learning when we know that most learning is informal?

I don't want to pit formal learning against informal learning. It's simply a matter of balance. We have far too much time, money and effort spent on the formal side, while the informal side receives little or no attention. It's not that there's a lack of ideas and opportunitiess at relatively low cost.

Seven Wonders of the Digital World

This came up in a chat with my 12 year old son Callum as we were leaving the Great Pyramids at Giza, the only remaining Wonder of the Ancient World. He suggested 3 of the 7.
1. Wikipedia
Biggest democratically built, growing repository of knowledge ever.
2. Napster
Radical and simple idea that changed the world of digital distribution for ever.
3. Toy Story
Perfect integration of story telling and digital graphics that charmed everyone.
4. Linux
Free software struck at the heart of the big vendors. Set the pace on open source.
5. Doom
Groundbreaking first person shooter. Still echoes through games and movie world.
6. Google
Mother of all search engines. Simple front-end and hyper-powerful back-end.
7. World Wide Web
Easy to forget the big-bang idea that spawned the digital revolution.
Any alternative entries?
at January 19, 2006 15 comments:

Mind blowing opportunites for Learning 2.0 in games like Second Life. These are simulated worlds where you create your own avatars and environments. Could this be an opportunity for affordable online multiplayer simulations? There's already loads of courses being run in second Life, along with a training environment for medics in emergency management. Businesses abound showing that business sims. There's even a market in the virtual currecy. 'Linden dollars' trade higher than the Yen!

Hoodies and happyslappers are being wooed into playing games by Edinburgh police. Thirty 13 to 14 year olds took part in the contest over five weeks in the local library, cutting youth-related crime by half. Nice reversal of the 'games incite violence' rap.

One of those ideas that’s bound to work. Who doesn’t have problems with project management? Forget Microsoft’s PM. Here’s some free project management tools. These guys rightly focus on communication and collaboration. All the charts, graphs and guff are also there. Assign to-dos and tasks. Post messages, gather feedback, simple scheduling and permissions, share files internally or with clients and track people's time. Over 100,000 sign ups and rising.

TRULY easy to use. No downloading, installation.

Love this site. TaDa is a web service for your ‘to do’ lists. Forgotten your new year resolutions? How about a list of books or movies you want to read and see this year? Make a list, check 'em off. Ta-da makes it easy to keep track of all the little things you need to get done, make lists for other people (pupils, students, co-workers, friends, family), share lists with the world ("My favorite movies of 2004") and subscribe to your lists in RSS so you're always on track. A truly fab site for Web 2.0 fans. Oh yeah, and Ta-da is free!

Fast Track: Why we hate HR

Jay Cross put me onto this Fast Company article which caused huge waves in the US. Tighten your stomach muscles - he pulls no punches.

The guy attends a couple of HR conferences and confirmed his worst fears, that ‘HR people are, for most practical purposes, neither strategic nor leaders’. He berates HR for having the wrong people, the wrong goals and the wrong attitude and has a hard hitting conclusion,’most HR organizations have ghettoized themselves literally to the brink of obsolescence’.

Learning Technologies 2006 - giving a talk on informal learning but in a quandry. How formal should I be ? Should I use PowerPoint? Dress down? The gist of it all is the idea that informal learning has always been more important then formal learning and that Web 2.0 leads to Learning 2.0, with Google, email, messaging, blogs, wikis, blikis, podcasting, feeds et al pushing formal learning further and further into the background. This is where the real action is on e-learning.

All styles no substance

I always wince when I hear people warble on about Learning Styles. Roger Schank thinks educationalists are simply confusing personality with the flaky, faddish idea of ‘learning styles’. Frank Coffield proved him right. Through Learning and Skills Development Agency research, he found a ‘bedlam of contradictory claims’ with a ‘proliferation of concepts, instruments and strategies’. In total they uncovered 71 competing theories. All were found ‘seriously wanting’ with ‘serious deficiencies’. Many were downright dangerous as they ‘over-simplify, label and stereotype’. But when did serious research ever affect the behaviour of the education and training world?
at January 17, 2006 2 comments: