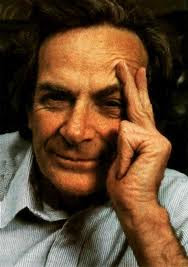 My son, who’s at a sixth form college, attended a lecture today, on chemistry, at his local university and the lecturer's first words were, "This is going to be a bit boring but there we are...." As Callum said, "It was about entropy and it just sort of fell apart". Glad youngsters have a sense of humour! But there’s a serious problem here. These sixth form students were visiting to be enthused about chemistry, not subjected to a third rate lecture.

It reminded me of the reflections of that great scientist Richard Feynman, a Nobel Prize winning physicist, regarded as a great science teacher. His lectures in physics are still best-sellers. When I gave my ‘Don’t lecture me!’ lecture to ALT last year, several people tweeted claiming that Feynman was the counter-example to my thesis, that straight lectures are largely a waste of time, claiming that Feynman was the ‘man’. Now I actually showed a picture, during my talk, of Feynman and the cover of his book ‘Lectures in Physics’. I did this because he was deeply critical of the ‘lecture’ as a teaching method. It only goes to prove that even academics don’t seem to realise that memory during a one hour lecture starts to fail.

In his autobiography ‘Surely You’re Joking Mr. Feynman!’ he writes cogently about his experience in teaching Physics to students in Brazil, where he stood up in front of the students and faculty (at their request) and said, ”The main purpose of my talk is to demonstrate to you that no science is being taught in Brazil”. His point was that the students were being taught to memorise techniques and formulae for passing exams, not understanding physics, “it’s not science, but memorising, in every circumstance”.

But it is in the 'Preface' to his lectures, written long after they were delivered, that his reflections on his own work matured. When he arrived at Caltech he was dismayed to find that the students who arrived full of enthusiasm for physics were being bored into submission by ‘stultifying’ lectures. He tried his best, including '3 problem solving lectures in the first year, mixing things up, introducing advanced but interesting content earlier than usual. So what were his thoughts?

First, ”one serious difficulty….there wasn’t any feedback from the students to the lecturer”. This, as a lover of the experimental method, was a “very serious difficulty”. He compares it to an experiment without any measurable output, a complete shot in the dark. And his general conclusions were clear, “My own pint of view is pessimistic. I don’t think I did very well by the students….I think the system was a failure.” He quoted Gibbon, “The power of instruction is seldom of much efficacy except in those happy dispositions where it is almost superfluous.”. In the end he admits that what is necessary is a more student-centred approach to learning physics through discussion and reflection, “It’s impossible to learn very much by sitting through a lecture”. Incidentally, these lectures are still worth reading, and I say ‘reading’ deliberately because one can stop, reflect, re-read and go at your own pace, a necessary approach to learning physics. The short version 'Six easy Pieces' explains the fundamentals of physics, but the longer lectures are also available.

As Samuel Johnson said, "People have now-a-days got a strange opinion that everything should be taught by lectures. Now, I cannot see that lectures can do so much as reading the books from which the lectures are taken.”

In an odd article, in the Spectator, Toby Young, who seems obsessed with Latin, recommends it as a compulsory subject in state schools, with a string of ridiculous anecdotes. He describes how a friend used Latin on an easyjet flight to communicate with others on the plane. “If I’m on an EasyJet flight with a group of European nationals, none of whom speak English, I find we can communicate if we speak to each other in Latin,” says Grace Moody-Stuart. (I’m checking the passenger list next time I fly easyjet, just in case the awful Grace sits next to me!) Young even claims, with no evidence whatsoever, that Latin would help inner-city kids speak better, as they’d practice unusual word-endings!
He does, however, produce one piece of academic evidence, which he claims gives us “chapter and verse” on the subject, a 40 year old study by from the journal Phi Delta Kappa, where a group taught Latin was compared to another similar group and positive effects found.
Latin is not the cause
Of course, he simply trawled back through the literature to cherry pick a study that fitted his case, ignoring the more recent, superior, work In Search of the Benefits of Latin by Haas and Stern (2003) in the Journal of Educational Psychology.
In a review of the literature, they found that Thorndike “did not find any differences in science and maths in students who learned Latin at school and those who did not”. And in the Haag and Stern (2000) follow up study, to the study quoted by Young, two groups of comparable students, where one studied Latin, the other English, were assessed after two years, “No differences were found in either verbal or non-verbal IQ or grades in German or Maths”. In general, they found an absence of transfer effects of learning Latin in reasoning. This had been predicted by Thorndike decades before, namely that transfer needs common ground in the source and target.
Now for the bad news: Latin makes it worse
The problem with understanding Latin is that you need to pay close attention to word endings; case markers on nouns and time markers on verbs. But in English and Romance languages word order and prepositions are more important. Endings play a minor role.
What Haag and Stern found, predictably, was that students who had learned one Romance language first found it easier to learn another Romance language, than those who had learned Latin. But it gets worse, as Latin caused incorrect transfer, such as the omission of prepositions and auxiliary verbs in Romance languages. In other words, learning Latin was detrimental to the learning of the new language.
They took two groups of German students, one who studied French, the other Latin as their second language. Both groups were then given a course in Spanish and the results measured. When the results were analysed by a Spanish assessor (who didn’t know who had taken French or Latin), the assessor found no group differences in verbal intelligence.
However, the French students made significantly fewer grammatical errors than the Latin students. As predicted the Latin students wrongly transferred the rules of Latin to Spanish. For example “misconstructions in verbs emerged to be either highly reminiscent of or identical to Latin verbs”. The French group turned out to be much better prepared to cope with Spanish grammar. Psychologically the Latin students had suffered from negative transfer using false friends in their new language. The fact that the grammatical similarities between modern Romance languages are much greater than that between Latin and modern Romance languages, means that the defenders of Latin are flogging a dead horse.
Incidentally, if you’ve heard the argument that Latin helps medical students learn and understand the considerable amount of medical vocabulary that has to be learned in medical schools. This also turns out to be false as shown in Pampush and Petto (2010)
Conclusion
This is not an unimportant or esoteric debate. Our state education system is in danger of being hijacked by minor celebrities, wannabes and TV chefs. Much of the debate is purely anecdotal, and worse, the anecdotal memories of a small clique of inner-London types who want to impose their worries and idiosyncratic ideas on the rest of us. It is important to counter this nonsense with the real evidence. The plural of anecdote is NOT data.
at February 16, 2011 31 comments: