It hit a Covid nerve because the people doing all the heavy lifting were the low-paid carers, nurses, supermarket staff, cooks, bin-collectors, bus and delivery drivers. Goodhart has written an unusual book, that should be read by all educators, at all levels – schools, colleges, Universities and workplaces - that exposes the straight-up hypocrisy behind an economic system that rewards knowledge workers at the expense of all others. Educational stratification has not created a better world, it has divided us and rewarded people unfairly. Inequalities have stretched societies to breaking point. 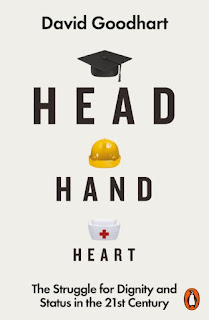 His is a plea for something I’ve fought for all my life, the rebalancing of society, economics and rewards away from the Head (cognitive work) towards the Hand (making and manual work) and Heart (health and care work). We have reached what he calls 'Peak Head' (which shouts out for metaphorical use!), the focus on funnelling everyone towards University degrees on a single route towards a single, cognitive elite. Many of the innovations in our past, such as the spinning jenny and steam engine were not driven by the University system. Entire economies in the east, China, South Korea and Taiwan, were built, not on a University system (they came later) but by a more rounded approach to development.

It is not as if this elite has served us well. We saw their disastrous foray into Iraq, the financial crisis that nearly ruined us all, Brexit, Trump – we’re witnessing the fall-out. The danger he sees, is that this elite will suffer badly when technology replaces their work, quicker than it may replace the refuse collector or child-carer. What he recommends is policy built around the Heart, Hand and Head triumvirate.

Our educational system is hopelessly lop-sided towards the University sector. I spent years as an unpaid Director in The University for Industry trying to deliver basic skills, set up a £55 million charity for vocational learning, was a Trustee of City & Guilds, sponsored a youth football team and have always felt an affinity towards the talent that is squandered through straight snobbery and self-interest. It’s one of the reasons I voted for Brexit.

Goodhart explains how this hideous hostage taking of society, property and money has evolved and backs up arguments by Caplan in education, that too much money is completely wasted on signalling in Universities and that alternatives have to be found, even just on the basis of avoiding social unrest. Trump, Brexit, the gilets jaunes; all show that there is deep dissatisfaction among people who did not go to ‘Uni’. This deification of HE has been at the expense of the majority who do not go there. In my travels around campuses, here and abroad, you don’t have to walk far to find homeless people sleeping in the doorways of student accommodation.

As we emerge from Covid, at last we have a book that has some ideas about the future. I don’t agree with everything he says, and would be much more radical, demanding blended learning and blended working as the default. But he’s pretty much on message for me. Note that this is not a page turner. It’s well written but analytic.

His The Road to Somewhere was a precursor to this book and one of the few books that actually explained why Brexit happened, naming the University system as one of the problems. This second book asks us a much more serious question. What are we going to do when Covid is over? Back to school with the same old satchels? Back to slabbing out lectures in exchange for crippling debt? Back to inhuman commutes and boxy offices? Back to flying here there and everywhere? Or a better sense of the common good?

He contrasts the centrifugal forces of hyper-globalisation stretched supply chains and the free movement of goods and capital, with a more centripedal set of ideas around the local, social stability and solidarity.

We seem to have lost the ability to create our future differently and fairly. It’s all groundhog day nostalgia for a past that was now clearly dysfunctional. Head, Heart and Hand – remember those three words when you put your bins out, buy something in a shop, order a takeaway and go out into the world, especially when you vote. I know, it's all a bit polemical but in serious times, you need to do some serious reading.