Many moons ago, Gil and I went to Vietnam on a whim. It wasn’t long after the end of the Vietnam war. We saw people cooking pho in GI helmets on the street, purple hearts were on sale in junk shops, crashed helicopters in gardens, the signs and wreckage of war were everywhere. Some images from Ukraine reminded me of this. The folly of thinking that full armoured divisions and helicopters will defeat a more determined army.

The Ukraine is, indeed, starting to look like Russia’s Vietnam. As the war continues, a highly motivated, agile, local army continues to out-think and ambush the invader at every opportunity, not with heavy armour but local support and surprise. The body bags keep piling up, angering folk back home and an increasing use of conscripts is being used as casualties (circa 20,000) continue to rise. This is a much faster casualty rate than either Vietnam for the Americans or Afghanistan for the Russians. It will take its toll.

Putin is even starting to look like Nixon, lost in his own peculiar Alice in Wonderland fantasy world of uber-long tables, sitting in big Baroque chairs (dictators adore these) in big white rooms, having Mad Hatter tea parties with expressionless guys in big brown and red military hats and epaulets. What worries me is the possibility that he turns into Kurtz, who takes that Marxist historicist, dialectical materialist BS and turns his thesis and anti-thesis, into the final nuclear synthesis. Historicism has a bad habit of becoming deterministic, driven by what he, and Marx, perceived as destiny. I thought that shit had died in 1975 with Pol Pot. It hadn't, the flame still kept alive by mad dictators and hapless academics.

For the present, however, despite his delusional bombast, Russia lost the Battle of Kiev, lost their flagship Naval vessel, a week later they have made no progress on their new fronts, are fighting clearly subversive fires on Russian territory and, unbelievably, Mariupal is still not completely conquered. Like the US in Vietnam, they have responded by simply bombing the hell out of the place. That’s desperate, it’s also morally despicable.

In truth, like the US, they had lost the war the minute they invaded, as the damage they inflicted in trying to win was sure to destroy most of the country. The means had become worse than the end. Their troops are most likely exhausted, demotivated, poorly supplied and want this to end as quickly as possible, just like the GIs at the time.

The sad truth is that this whole exercise, like Vietnam, seems ‘doomed to succeed’ in that Putin, once he had started, couldn’t back down, even though he has unleashed forces - militarily, economic and political - way beyond his expectations. They’re now stuck in a global quagmire, having made more enemies than friends. The US had the economic clout to pay for Vietnam and recover, Putin may, single-handedly, have created a second Soviet Union collapse, similar to that of the 90s. Lloyd Austin said as much yesterday “We want to see Russia weakened to the degree that it can't do the kinds of things that it has done in invading Ukraine. It has already lost a lot of military capability… we want to see them not have the capability to very quickly reproduce that capability.”

The similarity doesn’t end there. Within two years Kennedy was dead (we tend to forget that it was a very popular President Kennedy, who escalated that war but that’s another story), LBJ rumbled on and Nixon was eventually kicked out as the country turned against him. War does funny things to so-called leaders - both good and bad. 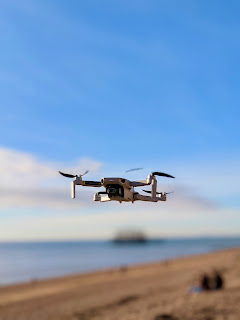 I've been droning on about drones for some time. In 2018 I was in Rwanda, where I got to meet a number of drone companies, delivering blood, doing crop mapping and so on. I came back, wrote a lot about this technology, bought one, gave talks at conferences on the topic and on 27 March had a punt here on Facebook, saying that “Ukraine is a drone war. Ukraine may be the first ever drone war.”
I have a consumer drone. The DJI Mavic 2 Pro can fly up to 8 km (4.3 miles) and will return to your feet with the press of a button. You can see what it sees on your smartphone and the stills and video quality are superb. When you use one, it is not difficult to see its potential in war.
Drones are being used in the Ukraine for several purposes

The Ukrainians have employed small autonomous teams, armed with drones, anti-tank and anti-aircraft missiles and beaten off the supposed might of Red Army. Turkish Bayraktar TB2 and the US-made Switchblade are attack drones that have been hugely effective. Swicgtblades are small, less than 2 foot, collapsable drones that fit in a rucksack, and are armoured. There's a larger 50 pound version. These are being sent in the hundreds to Ukraine.
My friend Peter O’Shea sent me a military article explaining why ‘finding is better than flanking’. Find and destroy, by drones, negated the need to risk flanking as it has the immediacy of surprise. A whole range of drones with lethal payloads have been used to good effect. They have even been used as distractors. The pride of the Russian Navy was sunk after being distracted by drones while a Neptune missile was launched.
A feature of drone tech often missed is its propaganda value. We are watching this war through the eyes of drones. Drone tech is tech that has changed the world without us realising it. We are barely aware of those thousands of drone shots we watch in films and box sets. Spectacular and cheap, it has changed the whole aesthetic of film. Those shots of Mariupol and tanks being taken out are often from the sky, recoded directly and downloadable from a smartphone. We see tank turrets fly, Russian soldiers running in fire. This war is Baudriallardian in that we see it from the sky. We’re there. There is nowhere to hide. All of that video is, of course carefully curated and released. Ultimately, wars are won by hearts not heads. The Ukrainians have won our hearts, hands down.
What we now see is a clapped out Red army, fighting an imaginary war from some old World War II manual. Their Putinesque centralised, command and control structure has been out manoeuvred by small teams with little drones, backed up with payload drones and a population with smartphones that pinpoints the position of every one of their clumsy tanks and trucks. All they’re left with is artillery. Even Mariupol has not yet fallen, with a small group holding on for weeks against the supposed might of the Red army. It’s prized naval ship was sunk after being distracted by a drone!
This clapped-out, old bandwagon has caused chaos simply because of its size but it is being wiped out, vehicle by vehicle. It’s a short drive from the Belarus border to Kiev, less than London to Birmingham and they still couldn’t get near the city, never mind take it. They have depleted their army, embarrassed themselves, turned Europe against them, strengthened NATO, lost their largest export market and will go through a second economic collapse, shunned by decent democracies.
Russia has already lost this war. Its army is being decimated. Its reputation is in the toilet. It has lost all of its bordering states and will lose more. More than this, it has strengthened the West. The only two countries left in Europe that are pro-Putin are Serbia and Cyprus, which is basically a Russian bank.
So where next? The same direction of travel. The EU needs to get its 27 fingers out of their bumholes and contribute to the defence of their people with a 2% of GDP commitment. They need to wash the dirty money out of the system and continue with strict sanctions until Putin and his cronies go.
Oh... and invest in drones. We don't know the half of it in drone world. Truss talked about Phoenix Ghost Tactical Unmanned Aerial Systems, which are armed drones. They are designed for open, flat country, so perfect on the new Eastern front. Phoenix Ghost is a low-cost, single-use suicide drone that behaves like a loitering munition — flying around an airspace before ramming itself into a target. My own view is that long distance, bird-like drones are already being used with incendiary payloads to start fires in key buildings. Insect size drones for surveillance also in action. I suspect these have already been in use and that drones will continue to play their key role, if not winning role, in this war.
at April 23, 2022 No comments: