Flipped learning: training got there first with flipcharts!

Flip one’s lid
We’ve all been there. That collaborative event where you’re forced to sit at round tables and asked to select a chair The trainer then poses some questions which you’re expected to answer with the Chairs of each table feeding back to the group as a whole, while someone writes it up on flipchart sheets and pins them on the wall, so that it can be collated and sent out to everyone.
What actually happens is that the extrovert quickly volunteers to be the chair (or becomes chair by default as no one else can be bothered), the table spends too long deciding what the ill-formed question actually means or shoots off on obscure tangents, the question forgotten. The chair then feeds back their own thoughts, ignoring all other contributions. Sure the flip chart pages are pinned up on the wall with bluetac, ruining the paint work, but you never, ever get the feedback sent to you afterwards.
This is what passes for collaboration in training, an tired-old ritual that is generally a waste of time. It’s illusory learning, pretend collaboration and just one of those awful things that only happen on awful training courses. I really do want to flip my proverbial lid when these sessions are suggested.
Flipside
OK, the flipside of flipcharts is that they do have their uses. They’re a bit boring, but big enough to be seen by small audiences and small enough to be used by a presenter and a little more small scale and human than a massive projection. For small group brainstorming and sport’s coaching, they can be useful.
Of course, they don’t require batteries or computer technology, so many trainers see it as a safe bet. Unlike PowerPoint, paper is designed to be written upon, and so you can capture the thoughts of learners. Its popularity among trainers is due in some part to its suitability to small audiences in courses with fixed content.
Some flipchart tips include; writing straight by ruling faint lines before you start, write words or images in faint pencil and amaze learners with your free-flowing sketching skills or write faint notes to keep you on track.
Conclusion
Not much to them really but I do like this spoof entry under Flipcharts in Wikipedia,
“Recently, scientists have developed a digital self-writing flip chart which writes word for word everything it is instructed to record. The disability action group "Armless" has stated that this is a significant step forward for disabilities groups to have conferences with people without disabilities. Also being released into public sale is a flipchart which is self-heightening. This system is known as the POGO system.”
at September 30, 2012 4 comments:

Lecterns: technology of teaching or preaching? 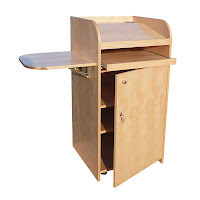 Educational furniture often has the whiff of pomposity and the ‘lectern’ stinks of the stuff. That most visible symbol of that disastrous carry-over from church to university, the lectern, speaks volumes about the pedagogic poverty of the lecture. It’s a phoney pulpit from which teachers play at being priests. What it encourages is the view that knowledge is fixed. The books that lay on the lectern were meant to be read aloud, the fixed scripture of the Bible, Koran or Torah. The lectern says “the book which is laid on this altar is holy and must be believed, or thou shall go to hell, or worse, fail thy exams”.
Lectures
What lecterns do is encourage dry lectures. That padded out, one hour (Babylonians had a 60-based number system) of relentless speech that has far more to do with lazy preparation than pedagogy. Give people who are inexperienced at teaching a prop and they'll use it and use it to literally prop up themselves and poor teaching, whether it be lecture notes or text-ridden Powerpoint.
Stand and deliver
The lectern fixes knowledge but it also fixes the speaker. It roots them to the spot and encourages that insidious practice of reading a lecture from notes or worse, verbatim from sheets of paper, or even more ghastly reading out a published paper. This destroys teaching in Higher Education, and kills conferences stone dead. Generation after generation of students get spoon-fed, or worse bored rigid, by this repetitive reading. When the lecturer lectures from a lectern, profession, practice and pomposity all meet on this one spot.
Speak don’t read
My heart sinks when a speaker stands stock still behind this wooden palisade, scared to come out and show themselves, fearful of the reaction. My heart sinks even deeper when I see the glasses go on and the sheaf of notes appear. I know I’m soon to experience psychological distress as the nodding movement from paper to audience casts the spell of indifference across the entire lecture or conference hall.

I’ve seen people step behind a lectern and say, “Good morning, my names is (glance down) Nigel Jobsworth, from the Department of Regurgitation or University of Dullsville, and I want to speak to you today about (glance down) this very exciting subject… (reading from paper). I’ve seen speakers reduced to sweaty, quivering wrecks because their notes have ended up in the wrong order. Without the written word they’re confused mutes. I’ve seen a Russian Professor at a UN conference talk for a full hour (to the minute) in a monotone voice, ignoring even punctuation, from her notes, announcing at the end that she was a Professor of Communication (I kid you not) from the University of Moscow. So hypnotised was I by this act of absurdist theatre that I neither understood nor remembered a single word.
Death of oratory
Academic and political oratory have been dealt a death blow by the steady retreat away from speaking honestly from your own mind, towards speaking literally from notes. In the case of politicians, it is notes written by flunkies, who strip life away leaving nothing but the banal bones of written prose or what they think are soundbites, but sound like the clichés they are. Just as bad are the academics who seem to think that lectern delivery exudes academic seriousness. It doesn’t. Reading is not teaching.
Conclusion
The lectern is only any good for holding a laptop. It’s something to walk away from, to avoid. Think TED and you can’t go far wrong.
at September 26, 2012 1 comment:

The Interactive Design Institute was a revelation when I visited. These guys deliver degree courses, accredited by an English University, to both UK and foreign students (full and part-time). The fact that you can deliver a real academic course with strong vocational ‘learn by doing’ components, online, is interesting, but the real story here is the fact that their students outperform the campus-based students doing the same course. Why?
I spent some time going through a learner journey and this, I think, is why they do so well.
1. Multiple intakes. IDI does three intakes a year, giving more flexibility to students and earnings to tutors in the academic ‘off-season’. This breaks the back of the archaic one intake a year model and makes teaching and learning a year-round activity. Not radical but necessary.
2. Superior feedback. Considered, detailed and constructive feedback is the pedagogic potion that makes them special. They really do follow the advice of Black and William through clear, point-by-point feedback designed to take the student forward. I’ve worked through their tutor feedback, which is brilliant and thorough. Nothing like the cursory, general, not written and recorded and therefore often forgotten advice in many face-to-face sessions.
3. Asynchronous feedback. ALL feedback is asynchronous. This is interesting. They have abandoned Skype, webcasts, videoconferencing and other synchronous, real-time forms of feedback in favour of asynchronous feedback, which they regard as superior. First, it takes away the awkwardness of academic/student face-to-face interactions. Second, it’s archived, giving the student and tutor a good audit trail to check, read, re-read and respond to. This is important, as the feedback si very detailed and needs a point-by-point detailed response. Verbal feedback is too transitory.
4. Exemplary content. Good course material, software tutorials, exemplars and other forms of useful content lie at the heart of the course, allowing the student to proceed at their own pace and get relevant teaching and help, whenever needed. Far too may University courses rely on thin, out of date content delivered in lecture series. The content is also kept bang up to date by dedicated ‘content update’ staff. Give the students access to good content, with strong tutor support and feedback, and they will learn.
5. Quality tutors. Given the quality of the content, the tutors can focus on what they do best – teach. Free from the constraints of lecturing, designing content and departmental politics, they can focus on feedback. It’s that simple.
6. Student support. Students need to be encouraged, helped and even rescued during a long course. IDI have a dedicated person, who really gets to know the students and cares about keeping them on track. She’s proactive, looking for signs and symptoms of fatigue or worry. It’s a vital safety net.
7. Lower costs. What’s surprising is how small their premises are, no sprawling campus, no lecture theatres, no monument building, just minimal administration and year round use. Given the low occupancy rates of most University buildings the savings are ENORMOUS.
Conclusion
What impressed me most about the IDI was the dedication of the staff to their students. This is a private sector organisation with the best of public sector values (they mostly came from that background). What they deliver is superior in many ways to the traditional campus degree, with real scalability, in several senses. First, it allows access to foreign students to complete courses with UK accreditation, free from VISA restrictions. Second, it copes with year round intakes. Third, it provides more flexibility for students. Fourth, it has much lower basic costs, where the money goes towards good teaching, not capital expenditure and the upkeep of expensive real-estate. Every University that has a design degree should consider using them. Given the demand and high costs of HE, this is surely the way forward.
at September 07, 2012 4 comments: