Reality + is a unique book from a unique thinker. David Chalmers made his name in philosophy, with Andy Clark, on seeing the mind or consciousness as extending further than we think – what many now know as Extended Reality. I included them both in my series of 200+ Learning Theorists.

Here, Chalmers tilts his lance at what most regard as fake knights, but is quixotic enough to see both windmills and knights as ‘real’. A modern Descartes he pushes us towards a view that every virtual world is a new reality – hence the title Reality+.

More than this, he thinks that such virtual worlds can be as good as the world we think we know. He takes his considerable conceptual sword to that other pub philosophy topic, whether what we are living in is a simulation. The results may surprise you.

This is not a casual read, philosophy never is, nor is it a short read at 462 pages. Nevertheless, it is a key text for anyone interested in the big ideas behind VR, AR, AI and the Metaverse. Another word of warning, a lot of it is counterintuitive, philosophy usually is but that is what makes it so exciting, so stick with it! The good news is that he is a good writer, way better (also philosopher) than Bostrom. He also lightens the saddle by bringing in science fiction, movies and games.

In presenting the idea that virtual minds are genuine minds, he takes us through a philosophical journey from Socrates, Plato and Aristotle, through to Descartes, Berkeley, Hume, Kant, Bentham, Mill and Frege to more modern philosophy of Moore, Rawls, Nozick, Putnam, Dennett and Baudrillard, cutting deeply into problems such as ‘What is real?’ He doesn’t shy away from ethics, not the superficial twaddle one sees most of the time but actual moral philosophy.

This is a book that matters, as the time is right for a deeper philosophical text around these issues. It is not a book for the beach, it is a book that will make you think deeply about technology and what is about to become a reality. 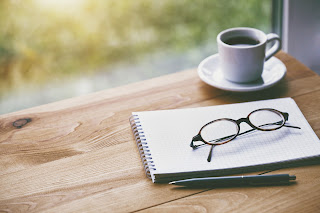 What is the most widely consumed psychoactive drug in the world? Coffee.
Hardly surprising but what effect does it have on your performance, memory or in preventing demenitia and Alzheimers? Beyond this does it have any other benefits? What was and is its role in learning?

We are still not entirely clear about how it works on the brain but a paper this month suggests that regular coffee drinking improves the signal-to-noise ratio during information encoding, in other words it improves memory and therefore retention.

In fact, there is now lots of evidence that coffee improves short-term memory and reaction times by acting on the pre-frontal cortex. Researchers from the University of Innsbruck in Austria, in a group of 15 volunteers given 100 mg of coffee, then scanned and tested, showed distinct improvements in memory in the caffeine fuelled group, "those who received caffeine had significantly greater activation in parts of the prefrontal lobe… These areas are involved in 'executive memory', attention, concentration, planning and monitoring."

A study from the University of Arizona, published a trial in Psychological Science, showed that in 40 participants, given 250 mg of coffee or decaffeinated coffee, the group that were given caffeine showed no decline in memory across the day in contrast to the decaffeinated group who showed significant decline.

In another French study researchers compared women aged 65 and older who drank more than three cups of coffee per day with those who drank one cup or less per day. Those who drank more caffeine showed less decline in memory tests over a four year period. The study, published in the journal of Neurology, raises the possibility that caffeine may also protect against the development of dementia.

Indeed, a trial from the University of Florida showing that coffee, more accurately caffeine, both prevents and reverses symptoms of Alzheimers in mice. Sure, mice trials don’t always transfer to humans, but these mice had the relevant human genes transferred. It suggests that caffeine both blocks and attacks the plaque that causes Alzheimers and memory loss. The University of Florida used 55 mice and gave one half doses of caffeine, similar to around five cups a day for humans, and the other half water. What was astonishing is that after two months the dementia mice had recovered their memories and were the same as the mice who showed no signs of dementia. The results were astonishing. What’s more, these mice had a 50% reduction in the beta-amyloid protein, which forms the plaque that causes brain dementia.

Since that first Yemeni goatherder observed his goats frolicking after eating coffee beans, coffee grew in popularity in the Middle East. It allowed Islamic Sufis to get through long nights of prayer and Islamic students found they could keep awake to recite and learn the Koran. The port of ‘Mocha’ eventually opened trade in the 16th century, through Constantinople, into Europe. As a habit of hospitality, it encouraged meeting socially and conversation, especially in an Ottoman Empire that did not drink alcohol. 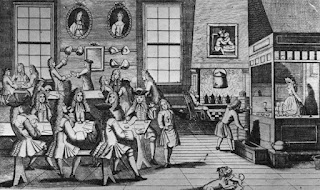 Trade across the British Empire into the Levant, led to the first London coffee shop in 1652, right by the Royal Exchange. It was an immediate success and within ten years there were 83 coffee houses in London, fuelled by Puritan attitudes, where alcohol was frowned upon. By the late 17th century coffee shops charged a penny a cup and were called ‘penny universities’, as they were such powerful places of cross-disciplinary debate. Drinkers sat around one long table, so you sat next to and opposite people, which encouraged conversation. Pamphlets and newspapers were also available. By 1739, London had 551 coffee shops, many hives of intellectual and business activity.

They became hothouses of political debate, which is why Charles II wanted to shut them down. Edward Lloyd’s coffee shop became Lloyds of London. Jonathon’s Coffee House in 1698 listed stock prices, which eventually became the London Stock Exchange. Similarly in New York, a coffee house became the New York Stock Exchange. Coffee houses were also seen as sharpening the wit. The Tatler (1709) and Spectator (1711) link the periodical with the coffee house, drawing content from that source. So we have then coffee stimulating thought and cultural output. Pepys goes to coffee house three or four times a day. Voltaire drank 40 cups a day!

Urban, corporate coffee chains, and now more artisanal small coffee shops, constitute a global revival. Starbucks and its imitators, picked up on the digital revolution, popular mobile laptop workers and students, offering free wifi. They have now become focal points for meetings and working. Many have people deep in thought, writing, coding, emailing and doing their jobs, stimulated by coffee and the general social environment of a warm and inviting place. WiFi in coffee shops has given them a real lease of life.

Quick and easy to make, with psychoactive qualities, coffee was also incorporated into the workplace, as a break from work but also a method of keeping awake and getting through the working day. At conferences we stop for coffee breaks, a social ritual which encourages social networking.

The drink of a coffee in the morning as a wake-up experience, then after meals to combat post-prandial lethargy, is now an established social ritual. Espressos, an Italian habit, came with the machine compression of water through coffee, making it quick. The in-out coffee culture developed because there was a tax on service, hence service at the bar, standing up.

Coffee has long fuelled learning, whether it be through the direct stimulation of the brain, increasing attention, improving memory, preventing dementia or providing a social context for debate and work. Coffee has more recently re-colonised the world, through a global coffee shop culture, in the workplace and at home. Fascinating drink, fascinating culture.