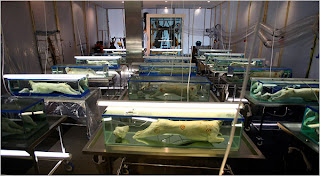 It’s a mock classroom with three ranks of 29 students as dead, decapitated, skinned sheep in formaldehyde. A single shark lurks at the back of the class. At the front is a huge towering tank with 10,000 litres of formaldehyde. Inside a white dove flies within a metal cage. On either side lie two halves of a sliced cow, some sausages, an old leather armchair (also in formaldehyde), cabinets of pills and drugs and an open umbrella. All bought for $10 million.

So what of modern British art and school?
Art is usually reactionary and irrelevant when it comes to education. Books, with their Harry Potter, Enid Blyton, Just William imaginary boarding schools, a million miles away from the reality of school for the huge majority. (93% to be exact). Theatre is just as bad with the awful The History Boys, replaying that old public school tale of extraordinary master and his boys. Imagine if the pederasty in that play had been included in a play set in a comprehensive. The movies are not much better with Dead Poet’s Society. The notable exception is the wonderful Ferris Beuller.

Hirst’s is a working-class lad, with an ‘E’ in A-level art, rejected by every college he applied for he eventually got into Goldsmiths. His punky credentials are better than his education, a close friend of Joe Strummer and general bad boy himself, he really is a 21st century artist.

Class war
I think he’s got this nailed. The loss of identity, uniformity, submergence and deadening of life the classroom. The sheer tedium of it all – an 11, soon to be 13, year minimum sentence. The religious imagery of the caged dove as the teacher caught in a pseudo-religious preaching role. The shark is the lurking bully and the ever-present air of frightening violence that is typical of the school experience. Like the students the teacher is merely a larger trapped, farmed animal. The classroom is the mortuary of lost desires. The search for knowledge only emerging after you recover from its leaden effect.

Only a Hirst, a young working-class guy, could get under the skin of school in this way. If you’re in go see it – illuminated 24 hours a day and visible from the street.

I wonder had Hirst been reading John Taylor Gatto...