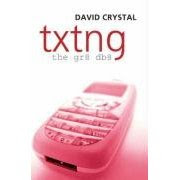 This is the title of a new book by David Crystal. Its enuf to snd Lynne Truss and John Humphries rnd the bnd. An increasing amout of evidence is emerging from Professor David Crystal, Beverly Plester and research I blogged about in June 97 from the University of Nottingham, that shows texting to be a useful accelerator in literacy. Far from turning people into illiterates, it helps with reading, writing, vocabulary and spelling skills.

David Crystal, author of the excellet Cambirge Ecyclopedia of language is one of the few serious linguistics academics to look in depth at texting and the impact of the internet on langauge(s). His 2002 book, where framing in emails, hyperlinks and other phenomena are examined was a good start. His observations on blogging are also interesting. He sees the internet as a window on raw language i.e. language as it is actually used. Not since Chaucer has this been the case. All sort of variants in terms of spelling, punctuation and expressions can be studied in this ‘real’ environment.