Cognitive overload – why we’re in the forgetting not learning game 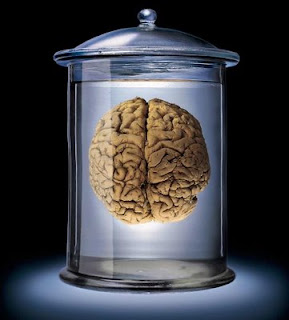 Victor Hugo went on holiday after publishing Les Miserables but couldn’t help writing to his publisher to see how sales were going. He wrote a letter with just one symbol ‘?’ and his publisher replied ‘!’. I love this story as Occam’s Razor is my guiding principle (the minimum number of entities to reach your goal).
On an academic note, Itiel Dror gives some fine talks, and if you’re lucky, he’ll bring his ‘brain in formaldehyde’ along, and pass it around the audience. It’s to force the point that the brain is the focal point for all learning, and that without knowing how it works, you’ll be a massively inefficient teacher and/or learner. He’ll also take you through some exercises to show the severe limits of your working memory.
Brain is a filtering and forgetting machine
Cognitive overload usually results in a loss of psychological attention. We all know the signs, drifting into other thoughts, feeling confused.... The brain is a highly selective organ and has some heavyweight filters. The first is sensory input, the second is our working memory, and then there’s a whole battery of processes that can aid or hamper encoding, deep processing and retention in long term memory. In other words, we have evolved to learn only what our ancestors thought was useful to us and ditch the rest. The brain is not a learning machine; it is a filtering and forgetting machine.

Cutting consciousness down to size was the subtitle of Tor Norretranders excellent The User Illusion, a book devoted to mapping out the limits of consciousness. Every second we ignore and discard millions of bits of data and the tiny residue is consciousness. Most people have no idea about how perception and the representation of the external world works in consciousness – but the illusion is that it is about what we need, not what actually exists. Out of the eleven billion bits of sensory information from eyes, ears, smell, taste, balance and touch, we experience a tiny fraction in consciousness. Unbelievably we seem to process about 16 bits a second and even then it passes quickly into the past and forgetfulness. Then upper limit seems to top out at 50 bits per second. Learning is about catching things in this fast panning spotlight and encoding them in such a way that they can be remembered. This is like juggling a never-ending series of balls and occasionally, and deliberately, popping the relevant ones into your pocket. On top of this we tend to operate with only one or two modalities at a time, sight, smell, hearing etc. making consciousness a process of selection and rejection.

Even worse consciousness is full of deceit and deception. It is always trying to get you to do things other than learning. It’s a dangerous world out there and we’re genetically disposed towards getting our rocks off, so placing young men and women in a crowded classroom with a herd of close proximity mates is unlikely to promote psychological attention.

Much of the effort in education and training is wasted as it results in instant or near-term forgetting. We know that working or short-term memory is severely restricted, and without adequate rehearsal and spaced practice, little or nothing is learnt. This is why chunking and the parsimonious presentation of content is essential, not just desirable.

Courses are bloated
Many courses are bloated with material that is quite simply unnecessary. It’s common practice to load up a course with stated learning objectives at the front, followed by an overlong introductory session on the history or background of the topic. You see this at conferences where experienced executives spend 5/10 minutes opening their presentation with slides about their organisation; IBM, Microsoft, Cisco – as if we didn’t know that they’re big, have loads of employees and operate in lots of countries!

In e-learning you see it with overlong animations, animations that are illustrative and not instructive, over-written text and spurious graphics that simply match the nouns in the text. Almost all e-learning programmes have text that has not been adequately edited. Interfaces are not consistent or fine-tuned and screens are too busy. Then there’s the absurd text plus identical audio. Note that in 3D worlds I think this is different as your avatar increases attention and forces actual performance. Consciousness is a simulation and that’s why simulations work.

In many courses, subject matter experts load the content up with over-long explanations, examples and legal stuff, as they don’t know anything about learning. If the content has been passed through ‘legals’ it will have gathered a lot of messy unreadable moss.

Delivery designed for dumping
Courses offer the illusion of learning through their breadth and depth of content. In reality, a tiny fraction is retained by learners and even then, our memories demand that this knowledge decays rapidly, without practice. Traditional learning delivery therefore seems to be designed for forgetting – talks, lectures etc. In addition to being too ‘knowledge’ based – because it’s easy, there’s a dearth of learning by doing, spaced rehearsal and practice. We’re a profession who are stuck in ‘teacher-mode’.

Online/offline overload
Now I happen to believe that cognitive overload, although common both online and offline, is commoner offline. That’s why I’m in favour of more online education and training. It’s an observable phenomenon among all ages. I’ve been wholly absorbed in games, programming, research and writing for up to 8-10 hours, almost without a break. My ‘flow’ experiences on this scale are largely online. This is especially true for children who find it difficult to find the intrinsic motivation to stay focussed. It also gives us the ability to implement spaced rehearsal and practice, by both reminding us that it is necessary and delivering the relevant content or practice.

Epilogue by Picasso
A man on a train once asked Picasso why he didn’t paint people as the way they are. When Picasso asked him what he meant by this expression, the man took out a photograph of his wife. “That’s my wife” he said, and Picasso replied “Isn’t she rather small and fat?”

Great summary. I've posted this to the eLearning Network's designers group forum and will be stealing from it without conscience.

I found this fascinating. From my perspective, as a lecturer in an arts-based subject, however, there is a problem with the model: it seems to be predicated on the idea that learning is primarily about acquiring information and processing it efficiently. Much of what I want my students to do involves analysing texts, so they need to be creatively interpreting them. Moreover, they need a certain knowledge before they can use their analytical skills. So, if I want them to respond to a sonnet, they are not going to be able to do so adequately without a knowledge of the history and context of the form. They will need to apply that knowledge to demonstrate their understanding. So they need the information, but that's just the basic tool they need before doing the real work. That's why I find it difficult to avoid the introduction to the background of the subject that you find so unnecessary (though I would agree that in the examples you give, it's clearly pointless and counter-productive).

In this case the historical context is the core learning. I agree that an analysis of say the Reformation is essential for an interpretation of the Dutch Masters.

A more interesting point is learning critical analysis skills. This is rarely achieved through lectures and direct teaching. It is a skill that has to be acquired through practice and a lot of formative feedback.

I blogged a post about Holbein's Ambassadors recently that was sparked by my lunchtime visits to the National Gallery, genuine curiosity and some active research in a book and on the internet.

I didn't feel the need for a lecture and suspect the analystic skills in your subject could be successfully taught without lectures.

Yes, I read your post about The Ambassadors with great interest. I'd previously investigated it myself as part of my teaching of a novel by Gilbert Adair, called A Closed Book, and it was fascinating to see how it resonated with that very clever postmodern work.
I also agree about the need to practice skills. One thing I've been encouraging my colleagues to do is to get students to write more in class - messy, not-to-be-submitted, formative writing. It is difficult sometimes, though, when students (and some staff) have such an intrumental view of what learning is.
I think you are right about the lecture, though I think there are possibilities in a more dynamic, interactive form of lecture. The traditional lecture is moribund, I'm sure.

Note taking and writing are, I think, essential in class. Two studies show that they increase retention by up to 30%, if notes are not just verbatim. I think every student should be forced to take notes and get writing. It's where the real cognitive action is.

We aren't information processing physical symbol systems, and so the concept of 'cognitive overload' is in some important ways misleading.

This, for example: "Every second we ignore and discard millions of bits of data and the tiny residue is consciousness." Is literally not true. Every bit of data informs a part of our neural processing; it is filtered through layers of neural nets until it activates, or becomes a part of, background neural activity.

It is only our *representation* of the cognitive function (*as* a type of data processing) that 'discards' the bits of data. When we represent our visual perception explicitly, for example - when we observe attention-based phenomena or the phenomenon of 'seeing what we expect to see' we are *depicting* it as an information loss, but that's an artifact of the depiction, not the perception.

The role of consciousness is, of course, a complex philosophical question, but empirically, the degree to which, for example, working memory,encoding techniques, rehearsal and recall are effective, is measurable.