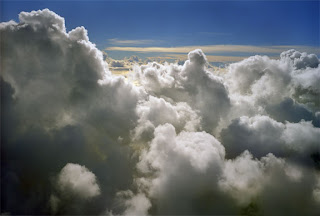 What goes up doesn’t come down

This is my new rule for web applications. All applications, pieces of software or media , eventually migrate upwards towards the cloud away from an offline or client seated environment – and they never come down.

My web mail is entirely in the cloud as is my calendar, blog, Facebook stuff and Twitter messages.

Microsoft are also promising Office in the cloud.

Games were bought on disc or cartridge and millions of players have now migrated online, some with plug-ins, but many now through shockwave and flash, truly in the cloud.

Video was on tape, then DVD then on-demand TV then downloadable through bitorrent and is now streamed from iPlayer or YouTube in the cloud.

With peer to peer file sharing the cloud is our own PCs. Millions are already creating the cloud.

The always-on, wireless-everywhere vision is starting to shape up. It really is useful to have a wireless device on you at all times, as there’s enough lily-pad networks to make it worthwhile. In this sense wireless access is becoming a utility, like water, electricity and gas.

Heads in the cloud

When you have our heads in the cloud, you may find yourself experiencing unexpected blackouts. I experienced this in Egypt in December 08 when the whole country experienced a loss of internet access due to a severed underwater cable. It’s frightening. We have to accept that we’ll have utility blackouts when the service is down for technical or natural disaster-type reasons.

The cloud may also rain down on us mercilessly with thunder and lightning . We have an increase in crime, hacking and general maliciousness on the web. Phishing has become a massive problem along with spam, scams and malware. Nigeria, as a nation, is now best known for its online scamming merchants.

Then we have the danger of political dog fights in the cloud - cyberterrorism. The Gaza conflict has sparked a real online war between Israeli and Palestinian sides, taking down each other’s sites and generally disrespecting Article 19 of the Declaration of Human Rights – the right to freedom of speech. This is now being routinely ignored by major governments.

The cloud is not benign

It hides all sorts of hidden dangers, and before trusting ourselves to a totally online world, we’ll need to know what dangers lurk in this model. Perhaps a better analogy is the ‘mist’ or ‘fog’ which can hide all sorts of nasty phenomenon.

With Lord carter's announcing an intention to bring Broadband to everyone through an industry fund, these issues are closer than ever. Look forward to the full report in June.