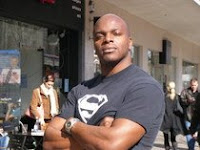 Shaun Bailey’s breezes into debates like a tornado, turning things on their head and challenging orthodoxies. As the black Conservative candidate for Hammersmith with 20 years experience in working in tough environments, he has earned the right to fight the next election on issues on which he knows a great deal.

He goes for the throats of the teacher unions, blaming them for betraying the students in state education by introducing undemanding environments in schools for the very people that need demands made of them. Unions deliver benefits to teachers, not students and parents. This parental involvement is a common theme among the people he speaks but they are largely excluded from the equation. It all starts in the home – damn right it does, so why do schools ignore or patronise parents so much?

As a youth worker for 20 years he sees that nobody is being really honest with the kids and parents he knows. Middle class types molly-coddle people which leads them towards almost certain failure. Lay it on the line – tell them and their parents what the consequences of educational failure actually means. Don’t pander to their every cultural need. It’s not about immersing people in the destructive side of their culture – a strong believer in sport and competition, he regrets the culture of dependency that is rampant in his community, making young black kids less, not more, independent. He says to the boys he works with, “I’ll do nothing for you but anything to help you.”

In education he is full on when it comes to classroom discipline and home-school agreements. He sees state sector education as having dropped the ball on these issues. Make sure the parents sign a document making it clear what their responsibilities are. I’m with him here. Our home-school agreement is written in that vague institutional style and says nothing about actual responsibilities. It even includes jargon that only an educational professional would understand. Schools are ‘educational’ establishments, not holding pens. He doesn’t really buy the idea that schools are the key to Community Cohesion and every fashionable social theory that pops up.

Much as I disagree with his politics, he’s a good guy and we need people like him to stimulate an otherwise moribund debate. His straight-talking style and honesty is what’s badly needed in parliament.

If you are unemployed and there are 50 people for every job, then frankly you are fucked. How do I prevent 50 billion quid being wiped off the stock market and my sevices cut in response?