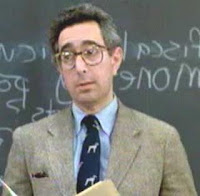 Saddened today at the news of Film Director John Hughes death, aged only 59. Ferris Beuller’s Day Off is my favourite ‘school’ film and I’ve shown the famous ‘teaching’ clip from this movie hundreds of times all over the world. It always raises a laugh, because he absolutely nailed the single, most absurd problem in education – boring teachers/lecturers, boring people by just talking at them. Ben Stein (left), a former teacher, plays the role perfectly.

“In 1930, the Republican-controlled House of Representatives, in an effort to alleviate the effects of the ... Anyone? Anyone? ... the Great Depression, passed the ... Anyone? Anyone? The tariff bill? The Smoot-Hawley Tariff Act? Which, anyone? Raised or lowered? ... raised tariffs, in an effort to collect more revenue for the federal government. Did it work? Anyone? Anyone know the effects? It did not work, and the United States sank deeper into the Great Depression. Today we have a similar debate over this. Anyone know what this is? Class? Anyone? Anyone? Anyone seen this before? The Laffer Curve. Anyone know what this says? It says that at this point on the revenue curve, you will get exactly the same amount of revenue as at this point. This is very controversial. Does anyone know what Vice President [George H. W.] Bush called this in 1980? Anyone? Something-d-o-o economics. "Voodoo" economics.”

Why my favourite film on education? Well I positively hate the whole private/boarding school thing that has dominated school films in the UK, especially the whole Harry Potter boarding school thing (including the books). It makes me wince when I see adults reading this tosh. I ahve a similar feeling when I see young minds being similarly polluted, but don't those middle-class mums just love this stuff. A tiny number of kids went to these schools, but as our culture is often defined by the people who went to such schools, we get it shoved down our throats. It’s repulsive, unrealistic and divisive.

Ferris Beuller showed school as it really is, OK at times, but on the whole rather boring. My other favourite scene from the movie was the long ‘taking attendance’ scene, again played by Stein, "Beuller, Beuller, Beuller....”. It goes on forever. The empty chair said it all. Bunking off school is likely to have been one of the most exciting experiences in a young person’s life. It was thrilling and the freedom exhilarating. That in itself says much about school.

Great clip and the premise is supported by the BECTA/Mori research into what kids say happens in classrooms throughout the land...ie the majority of time is spent listening to teachers talk or copying from a book or board(interactive? ....dont make me laugh!)

For what it is worth Donald,as an ex PE teacher, I think the Brian Glover scene from Kes is my favourite

Bob
An absolute classic - I'm laughing as I recall it in my mind - it's that funny (and stangely touching)!

Dick
Laughed again at this one!

Agree on this. Except the English teachers who made Shakespeare fun, other teachers just came and went filling up the blackboards with things no one understood. The fun part was removing chairs as the kids stood up to greet the teacher and slither to my own seat, to innocently watch the fat kids crash land on floor.

An interesting conversation among two brits,I like the nose picking you tube clip, just stumbled on this : http://groups.google.com/group/soc.culture.indian/msg/b62a98a9fe0bcb6b

Just a shame that Stein has gone on to be a creationinst loon. See more here: http://en.wikipedia.org/wiki/Ben_Stein#Views_on_evolution_and_science

So maybe an even deeper/better example of education than you could have hoped for?