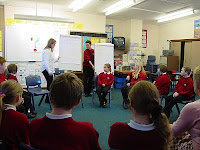 “Look, matey, I know a dead parrot when I see one, and I'm looking at one right now.” Four years ago I blogged about the disaster that was Teachers’ TV. This DfES initiative at a cost of staggering £20 million a year, had a cost per viewer ratio that would make MPs expenses look like a rounding error. Even then, it was considered a basket case, having "failed to reach the majority of its target audience...".

Then there was the ridiculous defence that the channel was ‘difficult to find’. Surely teachers know how to use a remote control? Then there was the brouhaha about it being too close to the sex channels You couldn't make this up! Were those poor teachers in danger of being too easily distracted or indoctrinated by lusty lessons on Playboy TV or Spice Extreme?

In thrall with TV, government has been slow to grasp the significance of the internet in learning while propping up the broadcast model. Teachers TV was a bad, ill-timed shiny new balloon that deflated from day one under the lack of viewers. It didn’t so much die as just fade into obscurity. Even a Damascene conversion to online couldn’t save it. Perhaps the brand Teachers.TV was the problem!

There were several flaws in the idea:

1. Wrong medium. Why spend so much money on TV? Locking content into an obscure TV channel was just plain crazy. It locked the content into the ‘broadcaster’s’ mindset, producing second-rate content.

2. Synchronous is stupid. For busy professionals a synchronous medium is the kiss of death. To subject teachers to the tyranny of time is just plain stupid. They’re busy, usually whacked out when they get home and while on holiday like to forget about ‘teaching’.

3. Dull, dull, dull. With limited budgets they cranked out cheap (in both senses of the word) discussions and documentary style programmes that failed to have real impact. The headmaster at my local school, hit the nail on the head in the press, "even when our own kids are on it I can't be bothered to watch it". It was dull, dull, dull. Most of it feels like the cheap TV it is, or a bad school lesson.

4. TV is a one trick pony. Video is relatively expensive to make and broadcast and fails on a whole range of learning tasks, especially those that require detailed understanding or attitudinal change. What is needed in this complex environment is a range of appropriate media – text, graphics, reusable resources, audio and video.

5. Asynchronous is good. It was mind-numbingly obvious, from the start, that online resources would be better. So why start with TV?

6. Broadcasters often poor at online. Broadcasters are often ill-suited to online production and fail to make the transition to online production. This came to pass, but even that contract was given to a TV production company, compounding the original error. It went to Geldof’s Ten Alps, a company with no appreciable expertise in this area – oh how London government bods love some celebrity contact. Even that eye watering £10 million a year contract has gone, leading to a collapse in Ten Alps share price.

7. Why a TV channel? Why do teachers feel they need a dedicated TV channel? Other professions don’t have it, so why teachers? Why not a dedicated channel for primary and secondary school learners?

Have we learnt nothing from Teachers TV, BBC Jam, C4 Education, and scores of other ‘broadcasters in learning’ initiatives? They are inevitably poorly managed, cost too much, and are doomed to extinction (Tecahers TV), disaster (BBC Jam) or a long, lingering, slow death (C4 Education). Let’s just embrace the medium of the age – the web, as it offers all media, collaboration, sharing, downloads, innovative pedagogic techniques and huge amounts of free content. In any case, it’s gone and I don’t suppose many people noticed.

Twas a Great idea when Trousers had flares with yellow bottoms and shirts had penny round collars, communication is axiomatically bi-directional! My fear is that we will see the assets moved onto YouTube and claimed as a triumph of technology.

The mindset remains _broadcast_ forget Teachers TV much educational use of the internet continues to use the internet in this way. The much praised BBC website is about as interactive as a brick, yes you can get the local weather but as my dad said when I built a weather station aged 11 (you could look outside the window )

Donald: I'm happy to say I agree with every single word. Good riddance!

I rather enjoyed Teachers' TV. I was able to downlaod and watch at my conveneince.

If you go over to

there is a bit of a debate going on, with plenty of people defending TTV.

What is really sad is that, by and alrge, those who are glad to see the back of it don't give your reasons, Donald.

The reasons they give for not wathcing it are (broadly): they have better things to do with their time; only sad people watch it and it's part of a conspiracy to get teachers to work even longer hours.

Not the most principled of 'arguments' and vaguely adolescent.

If they are typical of the attitude of teachers to professional deveopment then the reaosn for TTV 'failure' may not lie entirely in its design and delivery.

Spare a thought for poor old Sir Bob Geldof though, je could be a few quid worse off now: http://bit.ly/cDulC2

I read this on The Guardian Blogsite I mentioned earlier.

On the value for money delivered by Teachers TV:

Teachers TV is a cost effective means of delivering Continuing Professional Development (CPD) to the schools workforce. Six hours (24 programmes) of CPD material delivered by Teachers TV costs approximately £13 per person (it typically costs £300 to take one teacher out of a classroom for a one-day CPD course with six hours of instruction, including the cost of a supply teacher).

The total of 4.7 million hours watched by the English schools workforce is equivalent to 783,000 training days per year. At a rate of £300 per day, this volume of training would cost £235m if delivered through external courses.

Broadcast dividing broadcast hours by potential audience to reach a value for money figure totally omits any measure of effectiveness.

I agree training "away days" are not VFM but to have spent 10.2 million (and I suspect that this value is a bit on the low side)is bizarre.

How much better to have put them on youtube and create at least a façade of interactivity.

Thanks Francis. Several comments here. First it ignores the fact that the channel was started in 2005 with a £20 million per year costs, with scandalously low viewing figures. It only switched to being purely online in September 09. So that was £60-70 million of invested costs.
4.7 million hours watched; I don’t buy this. Web stats like this are notoriously deceptive. It’s like YouTube hits; people dip in and out of programmes, and if low quality cut out very quickly. The clue is in their own figures. They claim that 4.7 million hours were watched, the equivalent of 18.8 million programmes. In other words, every programme was watched in its entirety. Not true. I, for one, rarely watched entire programmes.
The ‘equivalence’ argument is also odd. Watching TV is low grade CPD, with little interaction and awful levels of retention. Would a teacher find it acceptable to sit classes down to hours and hours of TV per week? Of course not, but that’s the pedagogic model behind Teachers TV. (Actually in my school that’s exactly what supply teachers do – a survey of the kids by Governors uncovered this all too common scandal in schools. The Governors report was quickly squashed by the senior teaching staff.) What the report also shows is that they missed their viewer targets by a mile, that’s why zero bonuses were awarded.
Don’t we have a set numbers of INSET days per year? If Teachers TV is so good, why don’t schools simply sit teachers down in front of it during INSET days? In fact, they do. In a MORI poll, 50 per cent of Heads surveyed said they used Teachers TV content at school or for training purposes. 49 per cent of teachers surveyed use Teachers TV content at school or for training purposes. This is interesting as you’re paying for the costs per day, supply teachers and Teacher’s TV costs, A double whammy. To be accurate in this comparison, you’d have to identify what amount of Teachers TV was watched in schools, as opposed to the home.

My point, like Dick’s, was that the core cost could have been much, much lower, with better results if they hadn’t been stuck on the TV commissioning model. The web is not TV. For this money or a great deal less much more could have been achieved. The bottom line here is that you can put all of these programmes on iTUNES or YouTube for free.

Dick: Re 'They Would say.." Well, I believe that philosophers call this the subejct/motive shift. But Donald can probably clarify this one.

Donald: Well, many good points made. I feel that the channel has its fans. Many programmes are short and quite useful to start some discussion. I don't think the idea is to sit and watch all day.

Perhaps they can shift to You Tube. I believe they had a business plan in preparation for this eventuality but got taken by surprise.

Regarding supply teachers and TV. In my last school we had to leave detailed plans if we knew we were going to be off. We also created some generic lesson plans, different for each year group, which we left with our subject leader in case we were off without notice.

I think the leadership at your children's school leaves much to be desired. Perhaps I could act as a consultant once my redundancy comes through!!!

It seems that TTV has come in for a fair bit of punishment on these pages. I would like the teachers who post here to spare a thought for EFL teachers (well we're not really 'teachers') and other teaching professionals working outside the UK.

You can, if you know how, download materials and videos from teachers tv - yes, even if you're outside the UK. Some of these training materials are invaluable for educators working in less well-resourced enviroments or where teacher training is a lot more academic and a lot less practical. During my career as an EFL teacher, pre-service training and in-service training are woefully inadequte, so anything like Teachers TV that fills this gap is really appreciated.

I know that my classroom practice has really developed as a result of watching teacher's tv, and it is a really important resource.

Fair enough, but that's not what it was funded to do. EFL is largely private sector and needs to pay for itself.