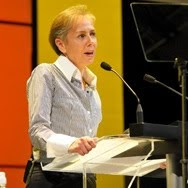 Jackie Orme is fast becoming the Fred Goodwin of personnel and development. Just released accounts see her pocket a 400k salary. Her £85,000 bonus, is up by 49% from £57,000 last year. Not bad for an organisation whose commercial revenue has plummeted (down 23%), research down and ridiculed (down 57% & report pulled), magazine imploded (down 83%), investment returns bombed (down 74.7%) and membership angry and alienated about a command and control culture that leaves them with less services and starved of cash. A curious position for the supposed leader of the Chartered Institute for Personnel and Development, the main professional body for HR and training!

Forever twittering on about ‘leadership’, the CIPD is a rock-solid case study in poor leadership. All Orme has achieved is fiscal failure, while awarding herself a £400,000 salary and obscene bonus. This is a manager whose rewards are truly in inverse proportion to achievement and performance. On top of this she’s awarded herself a nice little 6k on top of her base salary, and don’t forget the 13k of benefits in kind – whatever that means. Then there’s the pension. She’s also creating a culture of greed through a dramatic 50% increase in the number of staff on £60k plus from 14 in 2009 to 21 in 2010. There’s no end to this gravy train. What are the remuneration committee playing at?

From her written text in the Annual Report you'd think the CIPD had had a bumper year. Despite its aggressive push into commercial activities, using an acquisition and its brand to squash commercial competition, its revenues are down by 20%. This is all the more surprising as they bought a consultancy i.e. bought income this year. Take away this acquired income and you have a drop in commercial revenues of 23.7%. Revenues from the branches are down by 45.6%, revenue from investments down by 74.7%. Of course, this all means that there’s been a lot less spent on membership services, education, research and branches. So much for measurable KPIs!

Bridge Communications: a bridge too far

Then there’s the odd acquisition of a consultancy, something that has been widely criticised by members. Surely the CIPD, as a charity, is in the business of supporting its members, not competing against them for business. The sum paid (£3.8 million plus a £900,000 earnout) seems massively overpriced. In any case, it’s not right to buy an advantage in the market which you’re supposed to serve. If I had a HR consultancy, I’d be none too pleased that my subscriptions have gone into buying my competitor.

The CIPDs house magazine (a dull, bi-weekly recruitment rag) has gone into almost terminal decline under her watch, with an 83% decline in revenues - yes 83%. Feedback suggested that almost everything was wrong with the magazine; low on features, lack of innovation etc. It's going to be relaunched, apparently but you can't relaunch a shipwreck.

Much is also made, by Jackie Orme, of the CIPDs research activities. What she didn't mention was the huge PR disaster, when they published a research report attacking the spend on Quangos in Education and Skills (seen as a thinly veiled attack on rivals). Tom Richards, the young researcher responsible for the report had nowhere near the depth and experience to do this type of report, so it was sketchy and wildly inaccurate, so factually wrong that several CEOs wrote public letters decrying the document, eliciting a groveling apology from the CIPD and it was pulled from their website. Then there’s the opinion pieces, that are overtly political, promoting, for example, a bonus culture in the public sector (wonder why?). Oh, and by the way, revenues in this area plummeted by 57%. Success - I think not.

Under Jackie Orme, the CIPD has managed something quite unique; collapsing commercial revenues, an expensive acquisition, reduced services to members, disastrous magazine performance and poor quality research. Serious questions were asked about her qualifications and ability when she was appointed. Those questions have now been answered. The AGM is at 13:15 on Tuesday 7 December 2010 at the Royal College of Physicianson, open to all members. Go along and ask a few scary questions.

Brilliant blogpost Donald. I wrote on Personnel Today a year or so back about last year's annual report. Seems like things have got worse. I'm sure the press office will trot out a line about "reward for stretching targets", etc. Fact is she is in charge of a failing organisation. Keep it up

We could always protest by storming their new building and occupying the roof!

Thanks Donald for this mind numbing tale of greed knowing no bounds. One suggestion though, not all of your readers (especially the foreign ones like me) might not know what is CIPD. Yes there is always Google, but why break our chain of thought!

Good point Vilu - I'll amend the post. It's the Chartered Institute for Personnel and Development. What makes it worse is that they're the main professional body in the UK for HR and training!

Good stuff as always Donald - but I think there's a wider issue here tan just the poor management of one membership body. Can you think of a single one that's actually relevant these days?

These things don't need good management, they need amazing, world class management, to turn them into organisations that can actually be of use to anybody.

Either that or they should just wither and die, and let their members create a Facebook group instead.

Good point Dave. The whole "Chartered Institute of...." is an old 'guild' model. Think of the real benefits to members of a lively, innovative community, largely online that really delivers innovation and change.

I'm no fan of the way that the CIPD is run and I've had my bust ups with them in the past (not least over the Think HR campaign). That said, I have a sense of unease at the way in which you single out Jackie as being singularly responsible. I know a lot of leaders in "institutions" struggling against cultures of ineptitude. It is always easy to attack the guy at the top, but I don't have enough information to comment about Jackie's performance per se.

As for the reward issues, to suggest that she has "awarded herself" any kind of remuneration is factually incorrect. My guess is that the Board of the CIPD are responsible for remuneration, so more importantly we should turn our ire there not only on this, but on a whole lot of other things too.

I don't disagree with the criticism, just the way in which it is presented as a personal attack.

Fair comment, but I disagree with some of arguments.
The evidence is in the annual accounts. Charities are forced, by law, to publish these accounts to make them 'accountable'. The failures I presented took place under her watch. She is richly (I'd say obscenely) rewarded for what she does and is personally responsible for the performance of the organisation. The buck stops with there. I was the CEO of a PLC and strongly believe that rewards should reflect performance, especially at the top.

You make a good point about the other 'singling her out' but I did also point out that senior managers in the organisation, that's why I pointed out the dramatic rise from (14 to 21) of senior managers on 60k+. None are named in the accounts. They are also, in my opinions, accountable for the failures. I have, on a previous blog, criticised the new Chairperson, who must also be held accountable for this mess.

I don't know Jackie Orme, and have never met her, but people who run charities should be accountable for their actions. I have spoken to many members over the last couple of years who are genuinely disgusted when they hear about these rewards. They keep this very quiet and the HR press doesn't really do 'real' journalism, so it's left to bloggers and others to point these things out.
Thanks for the comment.

Don't disagree Donald....I think we are on the same side!

Other commitments meant I missed your talk for the CIPD last week. However, I don't feel I've missed it having delightedly read your blog on Orme's performance. (And probably implicates similar behaviour from her predecessor, given how short a time she's been in the job). As you say, what's the remuneration committee's been up to?
I'd naively assumed that CIPD CEOs attracted big salaries because they did jobs commensurate with similar salaried jobs in other organisations.

I'd love to see wider questioning about both the efficacy and value for money of professional institutions. Could the next one be mine, the Chartered Institute of Public Relations? I've just had a look at their website - 40 people employed there, and they are still recruiting!

In my experience, they're all pretty much the same. Rather than forward-looking organisations they're populated by 'old-school' types who do little other than fossilise practice and defend the status quo.

I too am amazed. I have met her and reckon about £80k tops would be fair for a Charity CX. But as they say 'Bull Shit baffles Brains'

Many in CIPD Branches have made noises but the Centre do not listen.

Just another organisation hitched to the gravy train at the expense of its members who see little in return for their subs.

Thankfully, many senior managers/directors in HR have woken up, seen the light and are no longer stipulating CIPD membership as a prerequisite for employment.

Personnel have done a reasonable piece on this post http://www.personneltoday.com/articles/2010/11/22/56976/cipd-defends-chief-executive-jackie-ormes-pay.html

Interesting - One of the problems over remuneration within those sectors where greed seems to have taken over is that CIPD member HR Directors appear not to be providing some form of restraint and leadership in one of our own professional areas of expertise.
The CIPD should be leading in this field of responsible reward management instead of helping to feed the bonus frenzy.
It would be good to see our profession lead by example, instead of demonstrating weakness and rewarding average failure.

Mike. That's exactly the point. Of all the institutions in the UK, you'd think the CIPD would show some leadership. This is why I was so 'full on' in the post. Remuneration committees in the UK are weak and often in the pockets of the senior management. In this case the rem committee has the wrong mix.

Well done Donald for this fine piece of analysis and comment, especially as plain-speaking is one of the characteristics not normally attributed to people in the HR field. In my experience, HR people have always excelled at spin and machievellian behaviour - I mean, just reflect on the last time you got a straight Yes or No from an HR manager and you'll see what I mean.

In the UK we have a culture of 'every man for himself' which far pre-dates the big city bonus culture which people often complain of. It is not surprising that once people have risen to the top (whether through effort or otherwise) that they then do their utmost to maintain their lofty position. It takes integrity and humility to behave otherwise; these are attributes that are sadly lacking in the vast majority of leaders in this country, whichever function they represent. And ethics is considered by most people to be a tedious and irrelevant subject which has no place in the modern world. What we need is more leaders to show a bit of humility and set the example by doing 'the right thing', rather than just feathering their own nests.

I must admit that it makes me seriously wonder whether or not I'm going to renew my membership this year. The CIPD is becoming increasingly incidental to what I do as an L&D writer, and if much of my money is going towards paying huge salaries there's little incentive for me to keep paying out. I