"hello , this is Imogen , Jan's daughter , just to warn you if you are meeting up with her or due in work from her or whatever - she is in hospital after a stroke on monday night so will not be able to do anything for a while."
Jan Morgan, a well known e-leaning professional, had suffered from a stroke. (This message came from her 12 year-old daughter. How brave and mature is that?)
iPhone lifeline
It wasn’t long before the redoubtable Jan started to post from her iPhone in hospital. At first the posts were a little scrambled, and the spelling amusingly idiosyncratic. But as she recovered the spelling got better, the humour kicked in and she was soon posting about the awful food, asking for all visitors to bring a Starbucks and my favourite, “Nurses telling meboff for playing with my phone too much”. What was interesting was the way the staff kept complaining about her using her iPhone, yet as she says “it is my lifeline and link to the outside world hugely reassuring”. Then this lovely message “It would appear that I am sending bizarre messages as my spelling is atrocious and I'm not noticing before pressing send so apologies to everyone jan”.
D-Day
Among lots of updates on her progress, including several on the slapstick process of physiotherapy, a genuinely moving moment, “Had a few blubbery moments over the weekend... I miss Imogen, I miss my home and I've had enough of this game can I stop now please? ... But I've made such a fuss about the food and gone on strike as I just can't face it anymore ...” But D-day was not far off, “20th December -my discharge date... I'm going home hip hip hooraaaaay:):):)thank you everyone for your support these past 11weeks”. The lack of stimulation in hospital was clearly annoying her, “Given that the only entertainment offered by the hospital is Wednesday "art&craft" classes- currently making Xmas cards and looking like a morning at playgroup or Friday morning bingo classes.... Watching kettles boil would provide more stimulation!”
Now if you’re fortunate enough never to have suffered a sudden unexpected deterioration in your health or spent an extended spell in hospital, this was an extraordinary series of posts over several months. Jan is currently writing a book about her remarkable experience. (if there's any interested publishers out there - contact me.) What was fascinating was the way she overcame the isolation of the hospital experience by posting on Facebook. She was humblingly honest, frank and downright funny about her own recovery. Listen to this, on hospital food,“Salad today consists of grated carrot, cress - slices of orange and lemons.......truly weird”. We all experienced her progress by proxy and it was always fun to see Jan post yet another reflection on her predicament (often in weird spelling). It was truly life affirming. This record, of her posts during recovery must be a mine of useful information about the early stages of cognitive recovery. Then a gear-shift. 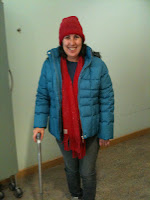 “I went home this morning:):) gosh! My stomach has been burbling since 6 am and ive been shaking - bit like stage fright, a few tears too. I managed the stairs up& down and the front door step. Only need grab rails by front door and additional support rail at the bottom of the stairs so minimal. I failed on the coffee test though as my legs were shaking so much I couldn't stand, so Imogen made instead:)” We were living this realtime journey with Jan, always posting replies, not just out of sympathy, but out of sheer admiration for her gutsy refusal to get downhearted.
Benefits!
Finally Jan got home and started to adjust to the life she temporarily left. Again her posts were full of laughs as she struggled with the simplest of tasks. But it was her adjustments to the benefits system that were fascinating. The realisation that she had now to survive on a greatly reduced income hit home and I’m sure it was a dose of realism for all of us. Benefit cuts seem very abstract unless you know someone who relies on them. It was a laughable, at times harrowing, description from inside the Kafkaesque world of the DWP, disability benefits, disabled parking permits, phone calls, form-filling.
“They don't do home assessments and if I miss the appointment I will need doctors written statement saying why! No they cant see the medical information already held by DWP due to Data Protection... How often is the Data Protection Act misused and misunderstood ? Meanwhile I stiill only receive £65.45 per week”
‎”... I have to have a DWP formal fitness to work assessment - study scheduled my appointment for 8:45 next Thursday, in Birmingham- I was supposed to make my own way there on public transport …I can't even walk as far as the nearest bus atop yet.”
Again, it was a window to a world few of us know much about. The labyrinthine processes and exhausting complexity of the benefits system was a revelation. Then arranging care and support. How do I find people? How much do I pay?
Scans 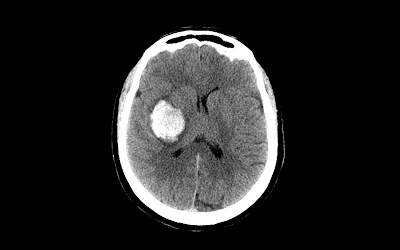 In a truly remarkable act, she posted her own brain scan, showing where the artery had burst. This was merely another post with a minimum of fuss. I can’t say how much I admired this small, matter-of-fact post. It said volumes about her as a person. What we witnessed was her cognitive recovery, day by day, as the spelling got better and the messages more coherent. I have no doubt that the iPhone and Fecebook contributed greatly to diminishing her sense of isolation by keeping her in touch with the outside world. A bolder claim, and one which I hope she discusses in her book, is the claim that it helped her re-learn and recover that much quicker.
Thanks
So thanks Jan (and Imogen), for your bravery in sharing what was clearly a massively traumatic event in your life. Thanks for your honesty and humour. We’ve all grown through this experience.


PS
This was written with Jan's oversight and permission. Here's a message from the lady herself....
"You may say i have been an inspiration or whatever but from my perspective it was you and all my other fb friends sending me messages and just getting on with your daily lives that inspired me to get better - the world was still turning out there and I wanted to be included. One year on and attempting to live on less than 18% of my former income, there are moments when my hospital bubble suddenly seems attractive (apart from the food)"


"Adjusting to my new normality is all an ongoing experience, but this time last year my future was bleak. Now I have a future and it is going to be a damn good one and I'm going to have  fun:)"
at October 07, 2011

Great post Donald...all so true. The funniest bit about the food, although I can't remember specific combinations, they were almost always pretty outlandish to say the least for example..evening meal would consist of boiled egg, mashed potato and coleslaw. I do remember she was so outraged that she posted photos on FB. We did however manage to get the the bottom of the problem. Jan's brain was not functioning at its best and when the food order card came round, she ticked the boxes for things that she liked. When the staff asked her if she was sure, she got a little bit indignant insisted that she may have had a stroke but she knew what she liked. Then when the food arrived she used to be horrified at the combinations she was being given....looking back it was so funny when the penny actually dropped that she was only getting what she asked for. I suppose the staff could have been a bit more insistant, but that may have been difficult as Jan is a determined person and its that stubborn determination and single mindedness that has seen her through a very difficult year. Without it, I doubt she would be making such an amazing recovery...

PS even when the food combinations were sorted, it was still crap and I was one of the regulars who used to brink in Lattes and White Magnums!!

Great story Lesley. Made me laugh out loud.

It made us laugh....Same thing happened with physio...Jan used to absolutely insist that she hadn't had any, then point to plan that she said was not being implemented. That penny dropped when I called in to visit one evening and she was at physio so had to wait for her to finish...when I called in a couple of days later she told me she hadn't had any physio all week! At that point we decided that writing things down would be a good plan! Which she started doing and all helped with recovery! Jan is absolute proof that Ebbinghaus forgetting curve is a reality. Her short term memory was really affected by the stroke, however FB contact with friends through her iphone gave her friends the ability to respond to her messages and once we realised that she was forgetting, we could either post reminders, message her or call her up. Something she would not have had without contact with the 'outside' world.

I enjoyed reading this post. It was rare to find this type of post that will make you happy,laugh and touch. Bravery is something that most people do not have and I'm really glad that even I don't know Jan Morgan I still manage to know her a little through this blog. Hope that she recover completely.. Hospital foods ugh! I'm not a fan of it..

We learned of Jan's stroke via LinkedIn. She was posting there as well and receiving messages from peers and friends. It was great to get a reply from Jan and being across the pond in the US, it was how I kept up with her progress. Her humor and sunny attitude served her well and she has come a long way on her road to an amazing recovery. She has inspired many with her determination and spirit. Wishing Jan the best on her book it will be a great read and a lesson in perseverance.