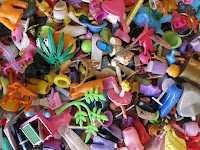 OK, if you have a spare grand or so for a 3D printer. Are they the ‘next big thing’ or merely an expensive way to produce lots of ‘small, useless, plastic things’? Apart from adding considerably to planetary waste, what impact will 3D printers have in learning?
Not a game changer
Technology is unpredictable. When Gutenberg produced his 2D printing press it led to massive social and political changes, and a shift towards putting learning literally in the hands of learners. This was to drive a religious reformation, scientific revolution and a rich cultural life based around writing and reading. In education, books and text remain the mainstay in most subjects.
Could the 3D printing press have a similar result? Well no. Books had been around for 12 centuries in learning prior to being printed. Little plastic objects have also been around for a long time but are not used that much in learning. Sure, there will be some applications in learning but this may not be a game changer.
What’s available?
Technology starts out expensive, experiments with formats, then prices plummet as the technology settles and becomes an affordable product. Laser printers, when invented  1969, were $20,0000but are now around 0.5% of that price, $100. This already happening with 3D printers. Sure, you can buy a $20,000 professional HP 3D printer but a $1200 3D printer is already available.
First came Cupcake  and Thing-o-matic then Makerbot Replicator with a single or dual head so that two colours or two different materials can be used in one object. Repraps such as Prusa, Mendel, Darwin etc are hacker designed using open source. Ultimaker, originally a student Msc project in Holland is now a viable $1194 machine. Makerbot, has had $10m VC funding, and its Replicator2 comes in a box. The market is still young, with a wide price range, different types of technology, using different materials producing different levels of quality.
How do they work?
Depends. Some squirt molten plastic or resin from a nozzle in layer after layer as both a table and nozzle move in three dimensions. Others use powder, ceramics even metal. Formlab’s laser plus resin is $3000 but resin is expensive $150 a litre, three times the price of plastic. Plastic around $50 per kilo but you can make hundreds of objects
Printers can print themselves
This is exaggerated, but it is true that some of these printers can print off some of their own components. The more they can print the cheaper they will be to replicate in other locales. More interesting is that the technology has benefited from the open source movement, in both software, hardware and the sharing of3D objects.
What do you do with them?
You can clone, create, prototype, share and replicate objects. Clone objects using a 3D scanner then print as many off as you wish. This has already happened in Metropolitan Museum of Art hackathon, where exhibits were scanned and cloned. Greek statuary from the British Museum has also been 3D printed. Create new objects, anything from new art to practical devices. Prototype objects, so that they can be refined, tested ergonomically and aesthetically, even presented to raise funds. Share objects, as they are all ultimately, relatively small packets of data, that can be shared, uploaded and download like any text, audio, image or video music file. Tens of thousands of 25000 objects can be downloaded from sites such as thingiverse.com and grabcad.com. Replicate objects on site or closer to their point of sale. Why ship objects when they can be manufactured on demand? It gives a whole new meaning to just-in-time production.
Long tail attached to one large beast?

This is a Chris Anderson, long-tail product that caters for all sorts of small batch, even one off objects for design development and actual delivery. This is interesting for a retailer, such as Amazon, where you can satisfy long tail demand in books. However, it’s likely the Amazon model will prevail, namely domination by a major player. For example, a new factory was opened this year in New York, the Mayor opened it with a pair of 3D printed scissors. This factory will 3D print any object you want in whatever colours and numbers, prototypes or finished products. It prints 3D 50 industrial printers.
How can they be used in learning?
Isn’t it odd, however, that we teach and learn people about the 3D world largely in 2D? Yes, but how often do you actually need a 3D object to learn or understand something?
Art & design
Museums are already using these printers to replicate some of their objects. The creative possibilities are endless, where students create forms and prototypes for sculptures, jewellery etc. It is likely to spawn new art in itself.
Archaeology
Archaeology in 3D is revolutionising the copying of bones of early. Louise Leakey’s African fossils. But other rare objects such as cuneiform tablets, coins, almost anything we pull out of the ground can be replicated on demand.
Engineering
Unfortunately, we in the UK have started with the rather cumbersome £6m research centre Engineering and Physics research Council, which says it is working with industry. What this lacks is real entrepreneurial push. However, it is clear that 3D design, prototyping and testing will benefit from this relatively cheap technology.
Maths & physics
Maths can be visualised, from simple geometric shapes, volumes, surface areas, intersections,  to sophisticated topographies. In general it offers huge opportunities to teach maths using real maths problems with real object creation as the goal. This could surely add a welcome boost in motivation for students who fail to see the connection between abstract maths and real world applications. The physicality of the process has been shown to instil curiosity and understanding. Interesting paper on this.
Medicine

In medicine, there are niche applications, such as anatomy, rare physiological conditions etc. However, it is likely that the real practice of medicine has more to gain than learning such as customised hearing aids, dental implants and so on.. Prosthetics can be created anywhere at anytime in remote places, customised legs, arms, hand etc. What’s more, with a scan of your existing leg an exact mirror copy from the digital file can be created.
More ambitiously, Professor Lee Cronin at the University of Glasgow has been working on models downloadable chemistry sets that can make complex drugs. The3D printer created the chambers and tubes which you fill with the correct, commonly found ingredients, and out pops a drug.

Bioprinting uses bioink (cells) to build layer upon layer to create tissue. Ultimately it is hoped that entire organs, heart valves or bone implants could be created this way. In the short term a 3D printer could print skin cells directly on to a wound. Printed meat could also be used by pharmaceutical companies for testing, saving huge amounts of money.
Science
The real world is in 3D (well maybe more but let’s put esoteric maths and physics aside until 6D printers come along) yet science is taught in 2D, largely in print or from 2D PowerPoint presentations. Molecules in chemistry, organic forms in biology, planets and comets in astronomy the list is endless…..
Music
You can even print your own flute! See this video. Other instruments are also possible.
Fun stuff 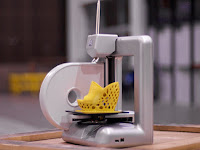 The Cube is a Chinese 3D plug and play printer for kids/families which can produce small toys, such as figures, robots, dinosaurs etc. in many colours for $1299. You buy cartridges just like a normal printer. You can print off clothes and accessories, such a bikinis, plastic shoes and purses. Rather worryingly, you can create replica keys really easily and a 22 calibre handgun has already been created! I feel a film script coming on…
Serious stuff

This is exciting, 3D objects for the developing world. Water pumps, frames for eye glasses (which break more often than the lenses), replacement parts on vital machines, such as sewing machines etc. are all possible. The problem with poor and remote economies is that the cost of shipping is often prohibitively expensive. By simply shipping the software, objects can now be printed at the point of need.
Conclusion
Every educational institution could have a 3D printer that can create objects across the curriculum, on demand. STEM subjects are often the first port of call, but many other subjects can benefit, especially art and design. While it is true that the potential of a technology is often realised once people start to use it in anger, 3D printers are in danger of being the ‘next big thing’ when they are, in fact, just expensive machines that churn out ‘lots of useless small things’, more gimmick than game changer. Time will tell. What is clear is that 3D printing is a game changer in the real world outside of learning.
PS
Thanks to Carlo at the wonderful International Centre of Theoretical Physics for his excellent recorded seminar on this topic that can be found here.
at October 25, 2012

Nice summary, Donald. I think this technology has real potential in bridging the gap between learning in abstract and learning through practice by making things tangible. Not just highly practical skills,but also more conceptual knowledge which benefits from 3D representation and manipulation. But I think this really comes into its own in a performance support mode of use, rapidly reducing the time taken from encountering a problem, devising a solution and implementing the solution, then evaluating the outcome.

They have got to be classed as a game changer. I will admit at the moment they produce items to the quality of cheap party crackers but with time I believe things will change.

Look at the print industry. If years printers have been around. Starting out with the dot matrix back in the 80's.

They were never going to replace the commercial printers of today.

Three decades on and the print industry isn't the cash cow it used to be.

I think the biggest impact will hit the toy industry. Companies like games workshop and airfix will not be manufacturers any more. They will just sell miniatures. You will also find that the barriers to entry will make it easy for new players to come to the market.

It will mean getting these items in a matter of minutes compared to days.

I'm not entirely sure where the technology is heading but I do see a change coming in the future.

I think its very exciting.

I just came across your website and would like to tell you that I have certainly appreciated reading your posts.

plastic is the most basic material that a 3d printer can work with. There are many 3d printers, and each of them can print with certain materials.
It can also be printed on wax, resin, wood conglomerates, nylon, rubber band, composite, etc.
Build your own horde of forty custom orcs, each one different from the other if you want. Thanks to multilateral printing systems , you can ask to have miniatures of 3 to 5 cm manufactured with exceptional quality of detail, without the need to remove supports or excess, in resistant and durable plastics on which you can paint.