Do the maths: 7 reasons why the obsession with maths doesn’t add up 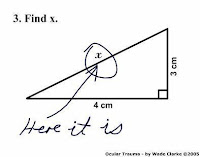 I'd much rather employ this smart, innovative, humorous and creative person than someone who actually knows how to apply Pythagoras's Theorem. Maths has never been the sole touchstone for being 'smart' or 'employable'. So I'm annoyed that maths has become a weapon of mass distraction in education, a topic full of bluster and exaggeration. Maths is hard to learn, hard to teach and easy to test, in other words the ideal recipe for mass failure. Everyone seems to agree that we have a huge problem in maths. The problem, it seems to me, is a lack of a basic understanding of maths by politicians, employers, even experts in education. So here’s some FAILS, or failures to do the simple maths.

But, but, but ... if you don't know what the calculator is telling you, then you're failing both at numeracy and the maths.

I have exactly the same feeling about Maths and Science. There is just too much emphasis on these two subjects. Here is my post on this topic http://bestapplications4u.com/10-important-things-that-all-parents-should-teach-their-children-mine-didnt

Interesting (though I think that people who were good at maths would see the problems they were causing and the problem is not the lack of transferability but more complex factors including bad modelling techniques, lack of communication, shared understanding, greed etc.).

Two questions: Which Richard Norris you mean? And what is the book you refer to at the beginning?

Agree with a lot of what you say about numeracy requirements for life rather than maths exams - as you will see if you have a look around our website - BUT if you are to use our name in vain then please get your stats right.

the 17m that we quote has nothing to do with GCSE achievement - it is based upon a survey of 7,000 adults carried out on the government's behalf last year. The questions in the survey relate to 'functional maths', which somewhat pulls the rug out from your first point I feel...

You will find the numeracy / maths venn diagram on our website.

Re. the rest of your points, I think that the bit you are missing is 'mathematical thinking' - i.e. adding a quantitative element to otherwise purely qualitative decision-making in life and employment - this is vital 'for everyone, for life' along with your narrower definition of numeracy.

Happy to speak on 'phone or meet for a coffee since we are nearby!

Much to applaud in terms of the attempt to distinguish numeracy from literacy on your site Mike and I applaud your attack on Gove's manic approach to teaching maths in primary schools.
However, my argument is against the general hysteria around 'numeracy and maths', which your charity, I think, almost inadvertently promotes.
On a practivcal note, the 'survey' you use covers everything to level 2 and above (Level 1 is GCSE (D-G) and Level 2 (GCSE A*-C) and in fact shows not much change since 2003.
The survey admits that it doesn't compare ICT skills between 2003 and 2011. However, I'd bet my house on the fact that these have improved vastly. This is significant, as I and many others, have argued that people do not need to do detailed calculations as they did in the past. We have calculators, tills, computers and mobiles that do this for us.
My main concern is the 17 million figure, which is already being bandied about as if it were a natural disaster, and leading to a hardening of attitudes among Conservatives about the Ebacc (your chair is a Tory peer which is a bit worrying).
Happy to meet for a coffee.